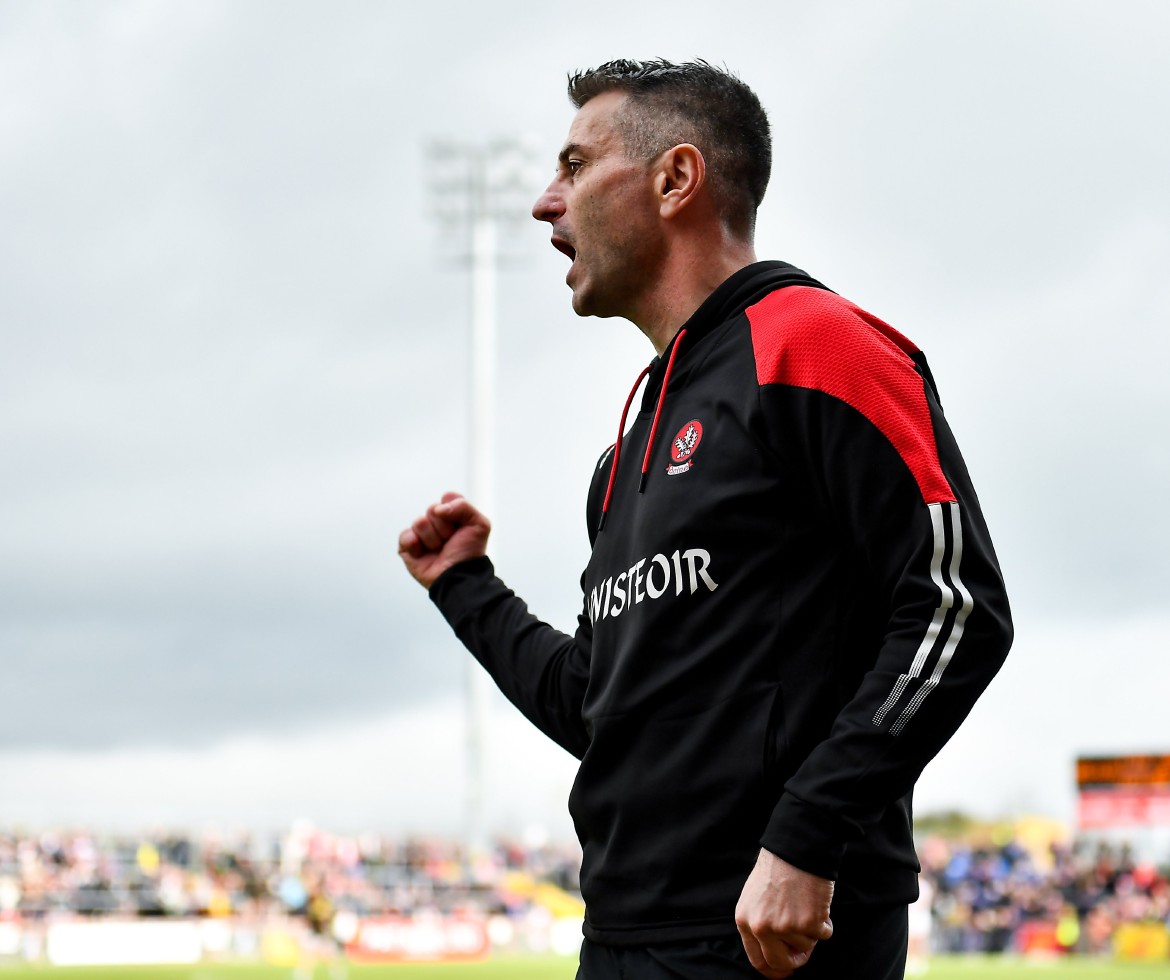 NEXT STEP...Rory Gallagher will demand more from his Derry squad

WE knew coming into this year’s Ulster Championship that it was going to be ultra-competitive, but the ruthless nature of the games to date points for a tremendous championship over the next few weekends.

In their opening game against Fermanagh, we all saw that Tyrone were operating at a level or two below their best, but naturally we put this down to a bit of rustiness.

At the weekend they were put to the sword by a superbly coached Derry outfit.

Before we get onto talking about Derry let’s stick with Tyrone for a bit and I’m sure there will be a lot of head scratching going on in the Red Hand County this week.

Naturally, after their massively successful season last season, the challenge for Brian Dooher and Feargal Logan this year would be about keeping the players motivated, fresh and hungry. Historically Tyrone have struggled the season after landing Sam Maguire, so you would think that would have been spoken about a lot over the last few months to ensure that the same pattern didn’t emerge again.

When we look back on the league campaign, I suppose the signs were there early on but we made allowances for the fact that they would have been late back into preseason training after their All-Ireland success.

We expected a big kick come the championship, but that clearly didn’t happen. It’s clear now that all cannot be rosy within the Tyrone camp when we take into consideration their performances in the championship to date coupled with a mass exodus of players or panel members who have left the squad over the last few months. So it’s time for some harsh questions within that squad.

They will be extremely disappointed, but the main aim now is to rally the troops and try and bounce back from what have been two pretty poor performances in the championship.

Granted, Tyrone may not have been at their best, but take nothing away from what was a superb Derry performance.

We all have to admit that this performance has been coming for the last year or so. Rory Gallagher started at the very bottom and cleared out his whole backroom team.

Anyone who wasn’t fully committed to the Derry cause was shown the door, so he must take great credit for where they are currently sitting.

The players and Derry supporters seem to be buying into what Rory is trying to achieve, so that in itself is a massive achievement given the mess that Derry football was in only a number of years ago.

Rory has assembled a fully committed squad and within that squad they possess some seriously talented footballers.

He has some absolute workaholics and some speed merchants, so they have the right mix to dine at the top table.

Knowing Rory Gallagher as I do, I guarantee you that his exact words as soon as he got that team back into the dressing room would have been “this result will mean f**k all if we don’t take the next step.”

As harsh as it may sound after a superb victory, Rory would have been 100 per cent right in that. In order for Derry to be respected, the team must take the next step forward.

This weekend Donegal will clash with Cavan and given how both teams performed in their last outing you would have to say that Donegal will be hot favourites heading into this tie.

I feel that Cavan may suffer the wrath of Donegal’s hurt and pain that has been bottled up since their last championship encounter.

Donegal took the eye off the ball that time around and that result will ensure that this does not happen again.

So, for me, Cavan will be up against it. I was extremely impressed by Donegal’s performance against Armagh. They got their tactics bang on and all the signs are there that they are improving week after week.

Cavan, on the other hand, have been operating at a significantly lower level over the last few months and the step up in pace and intensity that Donegal will bring may just be a step too far. Donegal by four plus.