The Breffni trailblazer brings a wealth of experience to the role, having refereed her first ladies intercounty game all the way back in 2006. She also took charge of the ladies All-Ireland final in 2014.

Since then the Laragh United club member broke more ground when she became the first female referee to officiate a senior men’s intercounty game in 2016, taking charge of a McKenna Cup game between Fermanagh and St Mary’s.

While her exploits are worth highlighting, Farrelly herself has recently said it’s a pity that women who officiate games are distinguished from their male counterparts.

“What we are hoping for in the future is that we can take these words away, that it is no longer about gender, that it is just a referee that turns up to referee a game, that we shouldn’t have to distinguish between male or female referees, that it is just a referee, and hopefully that these headlines will be diminished, the glass ceiling is broken, and that many more people will follow in the footsteps of the likes of myself.”

She also spoke about the pressures facing referees more generally.

“It can be a daunting role to take on. It’s not for everybody and a lot of referees get a lot of stick about different things when it comes to decision making.

“It’s easy to be along the sideline and be critical of somebody.

“You definitely need to have a thick skin, without a doubt. If you went out and refereed a game and you got tonnes of abuse the likelihood of you coming back is very slim, unless you have got that willingness to see it through.”

Noel Mooney, Joe McQuillan, who refereed this year’s All-Ireland SFC final between Mayo and Tyrone, and Martin Sexton will work alongside her on the day. 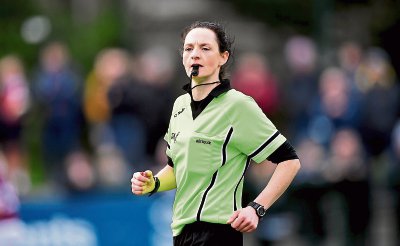