AS the seconds ticked towards half nine on Friday night, Glen’s Twitter account made their short and heart-breaking tribute to Francis Lagan.

In a month that saw the club reach their dizziest of heights of a first-ever Derry Senior Championship, they were rocked to their very foundations.

“There are no words,” was the message above a photo of Francis in a proud footballing moment.

Standing in the grounds of St Mary’s Glenview Primary School, where he was Principal, he was surrounded by players he helped coach to the pinnacle of Ulster underage football.

“We had some days in St Paul’s,” commented captain Connor Carville on social media, not forgetting the input of Francis. “A giant, who’ll be sadly missed.”

Glen club did what GAA clubs do, they wrapped their arms around the Lagan family who had also lost their mother Mary in September.

As Francis made his final journey into the gates of St Patrick’s Church Glen on Tuesday morning, the magnitude of the impact he made in his short life was there for all to see.

Young. Old. From different corners of county Derry and beyond. School children. Uniforms on show from various schools in the county.

The Glen players he helped mould, stood shoulder to shoulder in their green and gold jerseys. Playing Scotstown was a million miles away.

It was all done with the precision with which Francis carried out everything. A club person offered that Francis was as close to irreplaceable as they come.

Inside St Patrick’s Church, his wife Louise found a strength beyond words to speak about her husband’s life. Their daughter Rose read out one of the prayers of the faithful.

Francis, someone who made a lasting impression on children in the many schools he worked in, would’ve been so proud.

In his championship acceptance speech, Connor Carville did the occasion justice. The players were thanked. The supporters. The management. Those who made it possible.

He didn’t forget those club members who had passed away to their eternal reward. A touch of class.

Just metres away, stood club stalwart Ciaran Molloy with his daughter Clodagh. You could have reached out and touched the emotion. He lost his wife Orla in August, after burying his father Patsy just two years ago. His uncle John passed away this week too.

It has been a tough few weeks in Glen.

When the Glen players stood in Letterkenny’s O’Donnell Park, ahead of their Ulster debut, they were again arm in arm, this time to remember Niall and Donna Mallon in their hour of need after the passing of their newly born son Tiarnán Seón.

Within hours of Francis Lagan’s funeral, a green and gold chequered flag fluttered at the bottom of the lane as Camillus Logue’s coffin was carried to her place of rest by her family.

The previous day Glen supporter Jamesy Gribbon and Anna Murphy – a former Glenview teacher and one of the founding members of the camogie club – was laid to rest.

Bronagh O’Connor, someone steeped in Glen Ladies’ football was another sad loss. And Peter McKenna, who worked diligently at Watty Graham Park.

When the Glen bus noses into Celtic Park on Sunday, Michael Warnock’s late, game-changing point against St Eunan’s will be long forgotten.

“We were on cloud nine after winning the Derry championship,” Ciaran McFaul said after nearly being ousted by the Donegal champions. “That brings us back down to earth.”

He had no idea what the next two weeks would bring.

But, for a few hours this Sunday, a community that has been united in joy and then in grief, will again stand shoulder to shoulder. 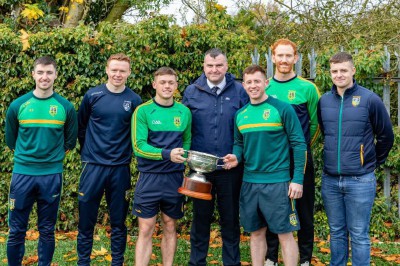