KILCOO will make the first defence of their Ulster title on Saturday evening when they face Ramor United at Kingspan Breffni, but they certainly will not feel like the holders going into it according to their coach Conleith Gilligan.

When the Magpies won their first-ever Ulster title in December 2019 with a narrow win over Naomh Conaill, they certainly didn’t expect to wait two years to have the chance to defend the trophy. The Covid-19 pandemic has since changed the face of the world and one of its more minor impacts was the cancellation of the 2020 provincial series.

They’re back for 2021 though and Mickey Moran’s side will be hoping to start their campaign off with a win against the Cavan champions.

“It’s a funny one because with no provincial last year and then the long lay-off it doesn’t kind of feel like we are holders,” said Gilligan. “It’s so long ago, the cups were sent back last year so outside that initial time to dwell on it there was nothing else.

“While we might be holders statistically, it definitely doesn’t feel like that from a playing point of view.”

Kilcoo’s return to the Ulster series is not a major surprise given that they have claimed nine of the last 10 county titles.

It was far from their easiest run to the Frank O’Hare Cup though with the side misfiring in the first half of an early match against Mayobridge before turning it around while they also needed extra-time to see off Carryduff. Ballyholland were conquered in a physical semi-final but they did start to play better stuff as they beat rivals Burren in the final.

“I think the first quarter of the final we were very good, grand in the second quarter although we lost our way a wee bit in the second half whenever we had to make a couple of subs because of injury,” Gilligan said.

“There were more pleasing aspects in that game than in previous fixtures for sure though.

“We had a very difficult draw. There was no game we could relax in and we had to take it game at a time. You can’t look any further than Ramor now.”

Given the stats he can pull from his head, it’s clear that Kilcoo are not taking United’s threat lightly.

“Their full-forward line was devastating in the two games with Gowna and then you have Jack Brady as well.

“James Brady has 2-48 in the championship, that’s incredible by anybody’s standards. (Sean) McEvoy has been scoring heavy too. Then Ado Cole at full-forward, he is 6’ 4” and is a read handful.

“So this is going to be a huge challenge for us.”

Gilligan also confirmed that they will make calls on Daryl Brannagan, Conor Laverty and Dylan Ward closer to the weekend after all three picked up injuries in the county final win over Burren. 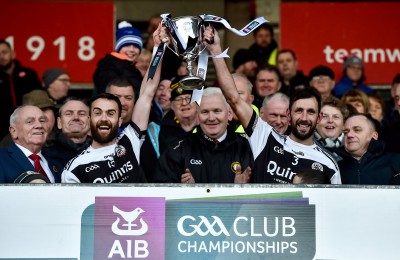