PREVIEWING the Down championship final last week, Kilcoo coach Richard Thornton was full of praise for the mentality of his team, and he doubled down on that this week, after they won a hard-fought 1-12 to 0-13 battle against Burren, last Sunday.

“The level of hunger and dedication these boys show is something I’ve never really witnessed. Whatever needs to be done to get to the top, they’ll do. Building up to the final, it was apparent to me that these boys were not going to give away anything handy.”

From a tactical standpoint, the final featured tense individual battles all over the field – something Thornton says Kilcoo relished.

On the day of individual battles, it was individual brilliance, which brought home the win for Kilcoo. Ryan Johnston contributed 0-4 from play, and Jerome Johnston’s early goal was ultimately the deciding score.

“The goal was a major factor in the first-half. Goals are hard to come by and it was a serious lift for us. It gave us something to hold on to, while tagging on more scores. He took it supremely; it was some strike. He has that in his locker, and it’s things like that which keeps Kilcoo at the top.”

Johnston’s goal put Kilcoo in front by three after just five minutes, and they kept the lead for the remainder of the game.

Having trailed by five at half-time, Burren were able to fight back and push Kilcoo close in the late stages of the game, but Thornton explained how his team were able to keep the scoreboard ticking over just enough, to see it out.

“In the second half, it was a case of us making sure that we nailed our performances and if we were able to nip on a couple more points, we knew that would be enough to see us over the line.”

The win on Sunday saw Kilcoo claim their ninth county title out of the last ten, but nothing came easy to them this year. Over the last four games, their average margin of victory was two points, and before they switch focus towards retaining their Ulster crown, Thornton reflected on what was a challenging campaign.

“There was a lot of character shown, especially on Sunday, but I suppose they’re well-seasoned now having won nine out of ten. People think Kilcoo must walk the championship every year, but in Down there’s a lot of clubs competing at a seriously high level and it’s not an easy championship to win – this year especially.” 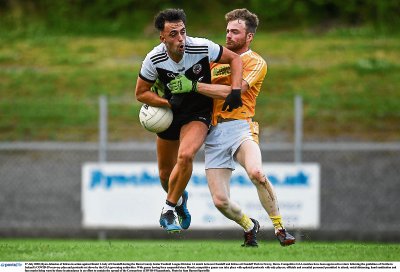 KILCOO… The Magpies have further proven their quality