After moving north in the late 90s, three years of trekking up the road to play for his native Ennistymon took its toll and he sensed good vibes from training with St Eunan’s.

He decided to throw his lot in with them, joined the Guards and after a spell in Glenties, his now based ‘just out the road’ in Milford.

Organ won an intermediate title with Eunan’s, hurled in their three final defeats to Setanta and still tips away with the junior team.

When plans for a new senior manager fell through this year, he wouldn’t see them stuck and stepped into the void, assisted by stalwart Paddy Flood. And the rest is history.

“When that final whistle went, it was just an outflow of emotion,” beamed Organ.

Speaking three days after their historic win, the passion in his voice is far from diluted.

“I will not forget that day for the rest of my life, it was amazing stuff,” he said.

No longer are they ‘chokers’. They have finally delivered. The nearly men tag doesn’t fit any more.

With the second water break approaching, Kevin Kealy hit a second St Eunan’s goal and Organ was ‘very confident’ they’d see off the challenge of the red-hot favourites.

“I thought it was a huge moment,” he said. “I looked at the Setanta lads going in, their body language was down and we were bouncing.”

The Eunan’s plan was nick ‘one or two’ goals and keep their clean sheet intact. In the final quarter, their instinct saw them sit back further than planned, but their resolve was enough the final whistle was sweet music to everyone in black and amber.

It was a total contrast from the 2-25 to 0-7 filleting they received at the hands of Setanta in the group stages, a game they played 33 minutes with 14 men. They were also missing senior dual players Kealy and Sean McVeigh.

Organ also recalls a comment he heard in the aftermath their semi-final win over Burt that he banked in the memory as extra motivation.

“I remember walking out the gates and somebody said to me the pick of the three teams won’t get near Setanta,” he said.

“It struck me that people don’t rate us at all and I thought ‘that’s grand’ because on form through the year nobody had put a glove on Setanta.”

He swore to the panel they’d never be set up to get ‘a hiding’ again. Ruairi Campbell hit a goal with Setanta’s first attack and two quickfire points ended the game as a contest early on.

“As it turned out, it was the best thing that ever happened us,” Organ admits. “Maybe I am wrong, but there was a bit of complacency on their part because they gave us such a hammering. It really united us, I mean it really reunited us.”

The St Eunan’s players were disappointed in their performance and Organ dished out a portion of honesty as to where exactly they were. The DVD was sent to his brother, a hurling coach in Clare, for a second opinion.

“He came back with a brutal analysis and I showed it to the lads. I said this is what has to change, x, y and z, and they rowed in behind me,” Eugene said.

Setanta players were allowed too much space. St Eunan’s were ‘reactive’ and standing off wasn’t going to cut the mustard. Danny Cullen and Gerard Gilmore had the freedom to do what they wanted.

It wouldn’t happen again. At a weekend hurling session two weeks before the final, when all their dual players were on board, Organ outlined their plan.

“We put Conor O’Grady in to sweep to close off the pockets of space, and two or three lads got assignments to mark their top men to nullify their influence,” he said.

Everyone else – well, they just needed to trust the plan and roll up their sleeves. Controlled aggression were the magic two words.

“We couldn’t concede early scores or early goals. We put their main men under serious pressure when they were on the ball,” he said. “It doesn’t matter who you have in defence. You can’t defend against the perfect ball in.”

And, Organ insisted there was a line they couldn’t cross. Everything had to be controlled.

“I told the lads there wasn’t to be a dirty stroke. It was going to be hard with 15, but impossible with 14,” Organ explains.

Six sessions later, they were primed and ready. This weekend it is the turn of McVeigh, Kealy and the club’s footballers to accept the underdogs tag and face champions Naomh Conaill.

He praises Rory Kavanagh and the football management for their cooperation with training. Anyone not wanting to play both codes wasn’t chased. If you wanted to hurl, the opportunity was there. For those hoping to do the double, Organ ensures they will be fully ready.

“They enjoyed Saturday night and they were back on the Mi-Wadi on the Sunday and Monday. They are out on Sunday…and I wish them the very best.” 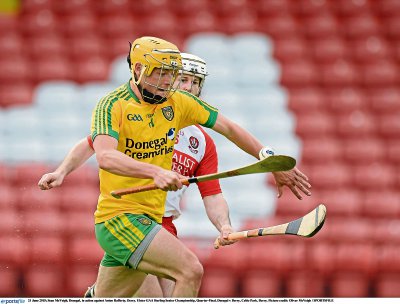