The Farney county lost by a single point to Tyrone, after a thrilling finish to the decider. Tyrone man McElkennon, who was assistant to Seamus McEnaney in his previous tenure as county manager, told the Take Your Points GAA chat show that he felt that Monaghan should be proud of their team’s performance, particularly after a poor start.

“I thought the first half lacked a bit of intensity. I thought they were slow out of the blocks coming out the game. plus side was that in the second half they were brilliant.

“They played typical Monaghan never-say-die football. They turned the game round and they were in with a shout.

“They will take plusses out it. But it has been a tough few weeks for Monaghan. Losing ‘Ogie’ (Brián Óg O’Dufaigh), a young lad I had worked with at the Monaghan minors. He was captain of the Monaghan minors that I worked with. I know what he meant to the set-up. I know how tough that was.

“You have to give Monaghan a lot of credit. They just came up against a great Tyrone team but there wasn’t much between them.”

McElkennon has coached throughout Ulster, including in Derry and Cavan, and he believes that the win for his county was a huge fillip.

“I think the win was important for Tyrone. I think it will give the management and the set-up a huge lift. It will help them going forward.

“Losing four players close to the game due to Covid put them under pressure. It showed the depth that they have to make changes and come out on top.

“It has been brilliant for them to win that Ulster Championship in those circumstances.”

McElkennon went on to explain why he thinks that Tyrone can beat Kerry.

Watch the show now via YouTube below. Or listen to the audio version via soundcloud 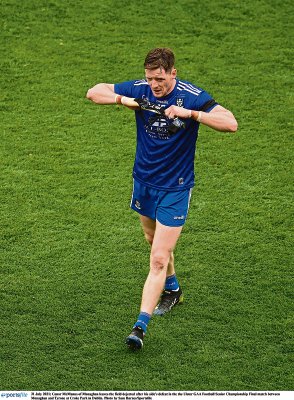 DEJECTED… Conor McManus cuts a frustrated figure after the final