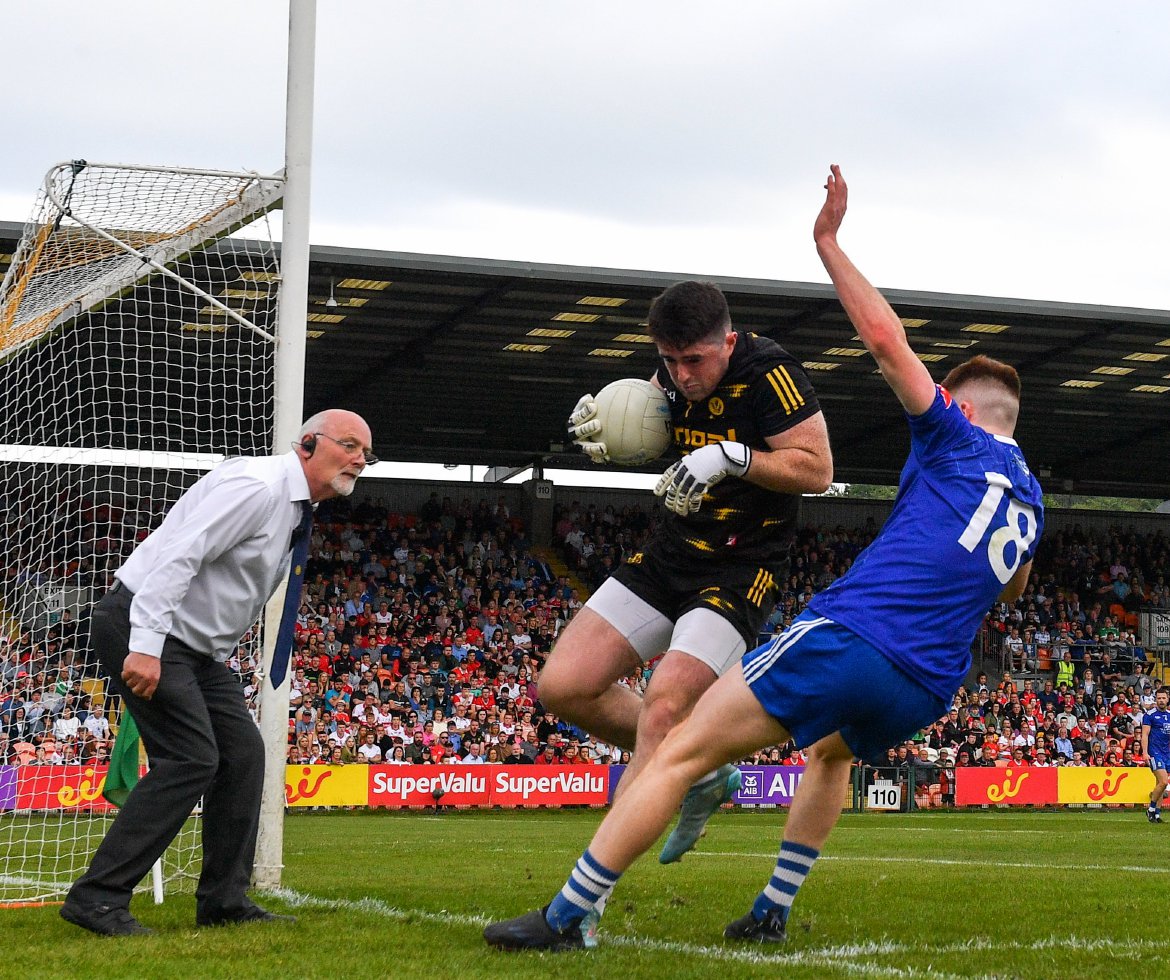 ALL-ROUNDER...Patrick Morrison was impressed with all facets of Odhran Lynch’s performance against Monaghan Photo caption

AT a sun-drenched Athletic Grounds in the cathedral city of Armagh, Derry overcame Monaghan to reach their first Ulster Championship final in 11 years.

After humbling All-Ireland champions Tyrone in the previous round, Derry was buoyant that they could reach the provincial decider to face their neighbours Donegal.

The Oakleafers attacked Monaghan from the start, a strategy that paid dividends allowing them to go in at half time up by seven points with the help of two first-half goals. It afforded Derry a lead that allowed them to be more conservative in their attacks in the second half and although Monaghan did rally, once Benny Heron scored Derry’s third goal (his second) the game was effectively over.

One of the main architects of that third Derry goal was goalkeeper Odhran Lynch. This was the game he joined the ever-growing list of modern day goalkeepers who have evolved into all-round Gaelic footballers who have the ability to join their teams attacking play and have an impact.

For Derry’s third goal, Lynch was breaking out of defence with the ball and played a delicious long ball into Niall Toner who set up Benny Heron for his second goal of the day. Lynch regularly left his crease to help relieve the pressure from the Derry rearguard allowing them to create an overlap to break out of defence.

He also made a couple of crucial saves in the late second half to keep Monaghan at bay. They may not have been the most difficult to deal with but in the white heat of Ulster Championship battle if you are not fully focused on performing your skills correctly mistakes can happen.

Lynch and Derry had great joy from their own restarts with Lynch having a very successful afternoon in this area. And if you add in the fact that Monaghan did attempt to put a squeezing press onto the Derry kick-outs, it makes Lynch’s performance a bit more polished.

Derry regularly converted their own kick-outs into scores at the other end of the field which was a springboard for their commanding lead at half time and a driving force for their eventual win.

With the continuing evolution of the modern day goalkeeper becoming more and more common it is important to remember there are still goalkeepers out there that are accustomed to playing in the more orthodox fashion. These goalkeepers are goalkeeping purists simply because they do not feel the need to add the ‘fly goalie’ skills to their repertoire. This is fine!

Everywhere I go when discussing football and in particular goalkeeping, the first question people ask nowadays is “What is your opinion on the whole fly goalie craze at the minute?” My answer is detailed but always the same.

The final point I make when discussing this is if you want your goalkeeper to develop this part of their game, that they are comfortable coming out and joining the play, it is pointless doing it during the competitive season. It must be started and developed during the GROW (off) season.

The goalkeeper must begin with drills, exercises and scenarios that involve them carrying the ball at speed, twisting and turning and then as they develop under pressure as well as being tackled. Once they have developed the skills of being in possession then, and only then, can you expect them to perform them consistently in a competitive environment. It is an area of the goalkeeper’s game that is increasing nearly week by week as we regularly see more and more goalkeepers emulating what they have seen from the top keepers during championship football.

What is needed not just from the coaches and managers of these goalkeepers but from everyone in GAA, is a collective trust that although it may be a relatively new phenomenon and feel somewhat unorthodox, we need to trust that the work behind the scenes is developing these new goalkeeping traits in the correct manner to ensure that they are used as effectively as possible.

So my message is simply to ‘Trust Your Keeper!”