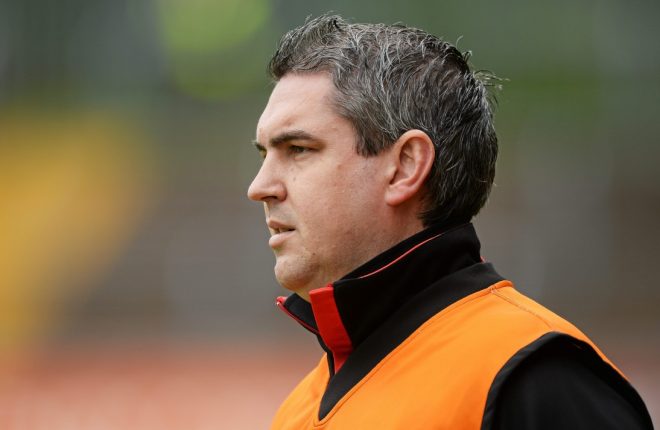 Shane Mulholland believes that stats are the muscle behind the message.

When it comes to coaching, providing video evidence with stats adds clarity to the message that can make a difference on the field.

“Stats for me are there to serve a purpose, they are not the be all and end all,” Mulholland said.

“Many people will be able to eyeball a game and know that you lost break ball in the middle of the field. But players like to deal with black and white.

“[Stats] give you that sort of statistic that back up opinions.”

Mulholland spent this year using Performa Sports video data analysis package to help Rostrevor win the Down Intermediate Championship, and also reach the Ulster final. He’s long been an advocate of using numbers and video analysis to coach teams, but it was new to the St. Bronagh’s club. He said that the players responded well, and he explained how he used the video package to change the way players thought.

“I don’t believe that every player gets what you say,” Mulholland said.

“We have a tactics board that we show players things. We can move things around and show players what we want. Some people will just get it when you talk about: ‘12 and 10 need to swap, and 13 and 15 need to swap’, but some players won’t get that. I would have used the video to get a clarity of message.”

Mulholland said that this year the Rostrevor management team had worked hard on how to provide more scoring opportunities. Rostrevor weren’t putting the ball over the bar enough, and they went to the video to see what the problem was.

“We talked a lot to the forward line and their movement, particularly as a two or a three. We showed them their movement which was taken from a very good angle in Rostrevor, you could see the three of them making the same run in the same direction.

“You are saying: ‘How can the back man not see that the first two men have ran the same way? You need to go the other way’.

“Until they saw that in video I don’t believe that they truly got what I was saying.”

So, Mulholland took them to the training field, walked each player through what they should be doing in order to create a 1-2 split in attack. And then he sent them video to add muscle to the message.

“I worked with them on the training field, standing next to the full forward saying: ‘When he goes left, you go right, and the other guy goes left and then we’ve got three kicking opportunities to play into our full forward line across two sides of the pitch’.

“I worked on that, physically on the field, verbally, and with the video.

“Some players need that visual medium.” And it worked.
Mulholland has been using video analysis during his time working with Ballyholland and also while with Down. He says that video analysis is the next step for coaching, and that any clubs with real ambition must embrace it.

“For me to put it into practice with something that the guys at Performa Sports have is very good.”

Mulholland discovered Performa two years ago. He had been using a now defunct system and when it stopped, he was stuck, but then he found Performa.

“I was searching around for something new and I came across the boys at Performa Sports. I had a chat with them and it was really good. It was a big step up in terms of functionality of what it was giving us.

“A couple of things stood out, just how intuitive the interface was. How simple it was to use without any training.

“When you tagged a game, and when they were videoed, you were able to pull in the video and it would overlay in time with the stats.

“I would have been old school recording the games, click and stop and taking down the stats. This was doing it all for you.”
At Rostrevor, he tasked one of the club members with compiling the numbers during each match, but made sure that he was close at hand throughout.

“Particularly at half time, before we had a ‘pow wow’ we would have went to the stats guy and asked for the headlines. Some of that would have backed up what you were seeing.

“It gives you that bit of evidence so that you could say; ‘we have given the ball away 14 times’. I like that black and white when talking with players, there is no subjectivity and he can’t say ‘that’s not true’.”

Mulholland understands that because he was one of those players who would have been quick to point out when a manager was bluffing.

“I was fairly opinionated (when I was a player) and I was a strong voice in a changing room. If I wasn’t a captain I still would have voiced my opinion.”
Therefore, he understands that players need to know that what you are saying is fact, rather than opinion.

“I found that over time it was an extra layer of support for what you are saying. That’s not born out of insecurity, but it added a level of professionalism, and players responded well to it.”

And as a marketing manager, Mulholland also knows the power of video, and it’s strength in supporting a message.

“I would be able to slice up a video and send it out through Whatsapp, about what we had done based on the video, supported by the stats.

“We were only giving them two or three minutes. I could ping it out to the Whatsapp group and then every single one of that panel had accessed that video and I could see who had looked at it.”

Mulholland has moved on from Rostrevor now, but he is going to keep using Performa Sports video analysis.

“I will be dealing with our u-14s I will introduce some of that to our u-14s, at a certain age they need to know technique but they also need to know about how a game works, how to manage a game.”

Find out more at the Performa website here: Performa Sports