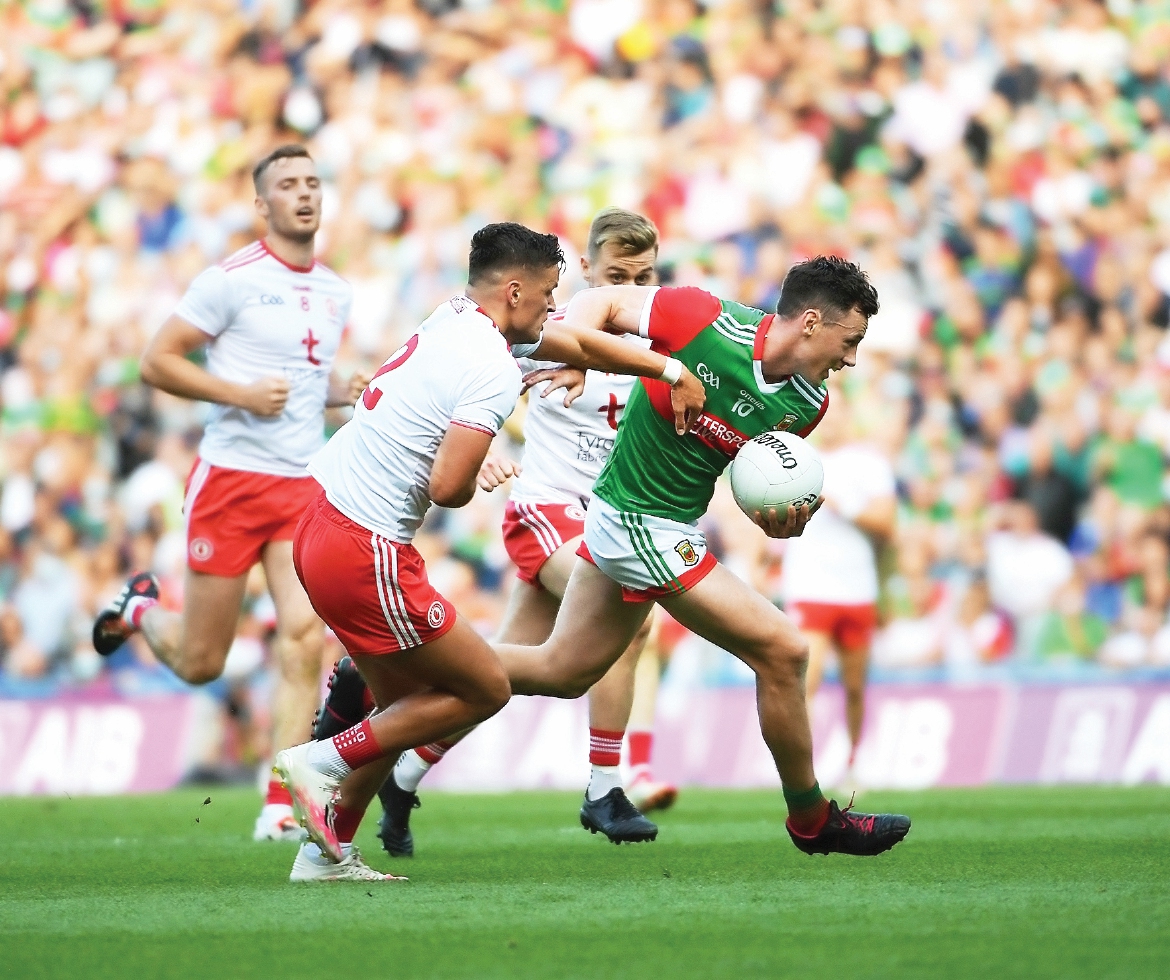 BACK in 1879, during a downpour of torrential rain, fifteen people reported seeing an apparition of the Virgin Mary, Saint John the Evangelist and Saint Joseph by the gable wall of the parish church in Knock, Co. Mayo. Since that night, Knock’s Marian shrine has become a holy place of pilgrimage and in 2018, during his Papal visit to Ireland, Pope Francis visited the county Mayo village.

The bells rang three times during the Pope’s visit to the shrine followed by a period of silent prayer and his Angelus address. Before boarding the plane back to Vatican City, and in an attempt to exercise the demons of the Mayo’s past, Ireland West Airport staff member, Audrey Elliott, asked the Pope to sign her Mayo football jersey, the Pope in an attempted exorcism upon the steps of his private plane scrolled “Francis” in marker pen on the front of the jersey. Witnesses say it was at that moment that the clouds cleared and the birds fell silent – surely it would be Mayo’s year.

Donal Healy the airport marketing manager was interviewed afterwards and was famously quoted as saying “Hopefully the curse has been lifted”.

Pope Francis was a footballer in his early years on the streets of his native Buenos Aires. In an interview with Italy’s La Gazzetta dello Sport he espoused the themes of hard work, sacrifice and camaraderie, sharing memories of makeshift footballs made from rags and “creating miracles, almost, playing in the little square near home.”

As Ryan O’Donoghue stepped up to hit a penalty just five minutes into to the second half on Saturday, with game finally posed at 0-8 to 0-10, the weight of history lay on his shoulders, this seminal moment in the game which would go a long way to deciding the destination of the Sam Maguire Cup. Given the events that had transpired at Ireland West’s Airport, Mayo people could have been forgiven for believing that not only were the 31 other counties of Ireland rooting for them on Saturday but the Pontiff himself was on their side.

This, however, was a miscalculation as on those dusty streets of Buenos Aires, the future Pontiff played in goal and as an enduring member of the Goalkeepers’ Union, he would no doubt have been praying for a Morgan save.

As it transpired O’Donaghue’s attempt at emulating Bruno Fernandes resulted in him looking more like John Terry as he hit the post and resigned the Mayo faithful to another winter of discontent.

Since the final, this Mayo team has been described in some quarters as ‘the GAA’s greatest time wasters’. On our recent episode of “Take Your Points” which will air this week, Paddy Tally, commented that the scars of these numerous defeats will ‘run too deep’ for the senior players and it is time for a root and branch overhaul of this Mayo team, starting with the management.

As part of this ongoing post-mortem on Mayo’s defeat, the collective failure to yet again get over the line has been laid squarely at the door of the celebrity culture that surrounds this Mayo team, with particular members being singled out for criticism.

The vehicle endorsements, the social media influencer culture associated with members of the panel have (in the view of some pundits at least) provided the clues as to why they are never able to get across the line and why Saturday’s defeat was inevitable.

For me, this is a far too simplistic assessment of why Mayo have been unable to reach the Holy Grail, take a look at Cathal McShane’s social media platforms. He is constantly involved in some form of promotion or another. Granted, the majority relate to his current employer but why should he be given a bye-ball and why does his outside endorsements not impact the Tyrone team’s culture when other players from Mayo are lambasted for doing the same thing?

Similarly, Dean Rock, a member of the previously all-conquering Dublin team, who can command €13,000 per sponsored Instagram post: this social media windfall, nor his well priced free kick taking school, did not appear to have impacted upon Dublin’s culture and nor was it ever mentioned as the root cause Dublin’s shock defeat to Mayo in this year’s All Ireland semi-final.

Go onto any social media platform and you will see that even the infallible Stephen Cluxton is pictured with his “Mitsubishi Outlander PHEV at Nearys Luck the Home of the Official Car Partner of Dublin GAA”. Again, this post didn’t seem to impact Cluxton’s kickouts during the past decade.

The reason Mayo lost on Saturday wasn’t because Aidan O’Shea gets a free car at Connolly Motor Group, nor was it because he went topless in the paper the week before the All Ireland.

I don’t begrudge GAA players making the most of their position and trying to benefit financially from it – the game is now amateur in name only, with managers, back room teams, County Board members, GAA journalist and pundits all getting paid off the back of the players’ endeavours. Why shouldn’t players think about what might be in it for them?

I recently discussed the issue of current players using their profile for financial gain with a high profile ex-GAA player and in response to my query as to whether it was right or not he commented that, “you can’t pay your mortgage with All Ireland medals.”

On Saturday, Tyrone were simply too good and played with the calmness and fortitude of champions. This current Mayo team, despite disposing of the Dubs in the semi-final, are far from the best Mayo team to have graced Croke Park in recent years.

There will no doubt be a lot of soul-searching done in the west of the country this winter and they will come back again next year for one more shot at greatness but whether another visit from the Pope will be required is anyone’s guess.

If you are to believe some of Mayo’s most fervent critics, in order to ensure delivery of the All Ireland for Mayo next year, Audrey Elliot, instead of asking the Pontiff to sign her jersey, should request some divine intervention to simply delete Aidan O’Shea’s Instagram account.