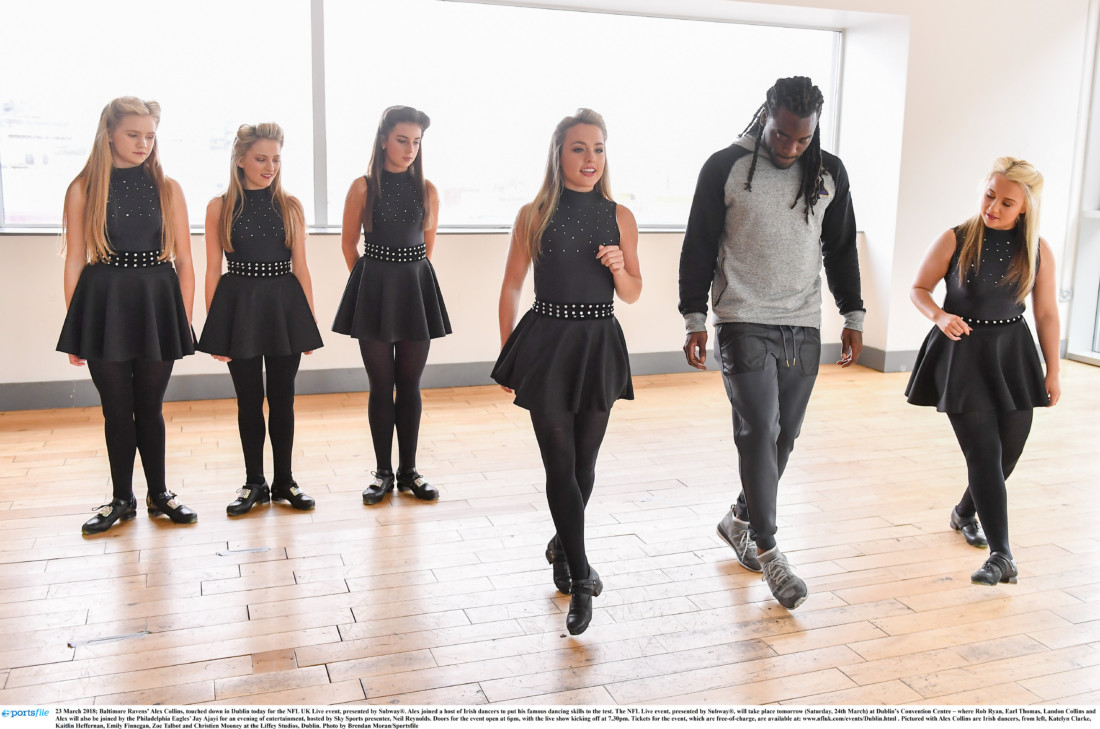 23 March 2018; Baltimore Ravens Alex Collins, touched down in Dublin today for the NFL UK Live event, presented by Subway®. Alex joined a host of Irish dancers to put his famous dancing skills to the test. The NFL Live event, presented by Subway®, will take place tomorrow (Saturday, 24th March) at Dublins Convention Centre  where Rob Ryan, Earl Thomas, Landon Collins and Alex will also be joined by the Philadelphia Eagles Jay Ajayi for an evening of entertainment, hosted by Sky Sports presenter, Neil Reynolds. Doors for the event open at 6pm, with the live show kicking off at 7.30pm. Tickets for the event, which are free-of-charge, are available at: www.nfluk.com/events/Dublin.html . Pictured with Alex Collins are Irish dancers, from left, Katelyn Clarke, Kaitlin Heffernan, Emily Finnegan, Zoe Talbot and Christien Mooney at the Liffey Studios, Dublin. Photo by Brendan Moran/Sportsfile

IN my last article, I explained how the Fight, Flight or Freeze (FFF) response was the cause of 99 percent of performance and injury issues.

The FFF response is a pre-programmed, automatic survival behaviour which does not allow us to have a say in what happens, it simply reacts to stimulus.

The entire animal kingdom shares this one particular instinct, and it is used every day by all species, including humans.

The response takes place instantly in order to protect you from perceived dangers in your environment.

It provokes intense emotions like fear, anger, jealousy, embarrassment in order to make you act quickly and ensure survival in situations that can be life-threatening.

As I said in my previous article, the Freeze response tends to be the last option when either  fleeing or fighting the threat doesn’t work. It is predominantly this freeze response which leads to under-performance.

In the Serengeti, the Thomson’s gazelle stands still or drops dead in order to con the predator.

In the sporting world, this can manifest as a player playing within themselves, hiding, avoiding physical challenges, but it can also unfold as the player giving in to the threat in the hope that it won’t be too damaging – for example, some players become talkative and nice to their opponents.

In the Serengeti, in the jungle, the FFF instinct is a successful survival response;  however, in the sporting world it is completely maladaptive and detrimental to positive performance – especially when we freeze.

So how can we counteract this? How can we override survival instincts in order to be able to perform free of stress?

First of all, it is important to note that you can’t logically think your way out of a stress response. You can’t consciously coach yourself through performance.

The conscious brain is too slow, and the game will quickly pass you by without you having any impact on it. Overthinking disrupts automatic, effortless execution (flow) – you want to be instinctive, but not FFF instinctive. An animalistic action requires an animalistic reaction. You must shake – literally.

That’s what Thomson’s gazelles do. That’s what zebras do, that’s what all animals  – who have just survived an attack – do.

To get back to neutral, to undo the freeze response and return to a physiological state which will allow you to perform, you must shake. To de-block that numb state you must move your body, stomp your feet, rub, massage, pat your muscles, breathe deeply and slowly and limber up – dance actually.

You often see players in the NFL or NBA dancing in their changing rooms pre-game.

Perhaps it is unintentional, but they are tricking their subconscious survival mind into thinking that there is nothing dangerous in their environment.

Conor McGregor notoriously shakes his arms and shoulders in the octagon – he is limbering up, and moving out of any freeze or numbness in his body.

It might sound crazy, but our GAA players should be dancing as a warm up – not running drills. Keep your drills for training – when it comes to game day, dance. Free your body up.

Just think of it – if a player is overcome by performance anxiety, fears an opponent or whatever the issue, is running drills really going to limber up the body, loosening and freeing them up to perform stress free? Would dancing?

The body needs to shake, but unfortunately we see shaking as a weakness. This is especially true in competitive sport, where the demand to be physically and mentally ‘tough’ encourages athletes to ignore the body’s natural request to shake.

A prime example is when athletes are hurt. The body of a player who receives a hefty challenge will immediately and instinctively go into a FFF response – the body has experienced pain and so the survival mind believes it to be under mortal threat.

However, we expect the player to ‘walk it off’ ‘suck it up’ or simply ‘play through the pain’. Our sports culture of toughness directly and indirectly encourages athletes to ignore their injuries.

They might receive praise for strength of character, but they are inevitably putting their bodies at risk of further injury.

We tend to react negatively to someone who is physically shaking because of injury – but the shaking and twitching are the body’s reflexes releasing the pent-up energy initially mobilised to deal with the shock of physical trauma.

And this build up of unreleased trauma can have a severe impact on long-term performance and health.

There is something quite contemptible about (some) human beings (sometimes) – we believe that we are beyond what we really are, and in doing so, we overlook the things that would help us most.

Shake, shake like an animal, dance even. Your body will thank you for it. Your fans might even love you for it.