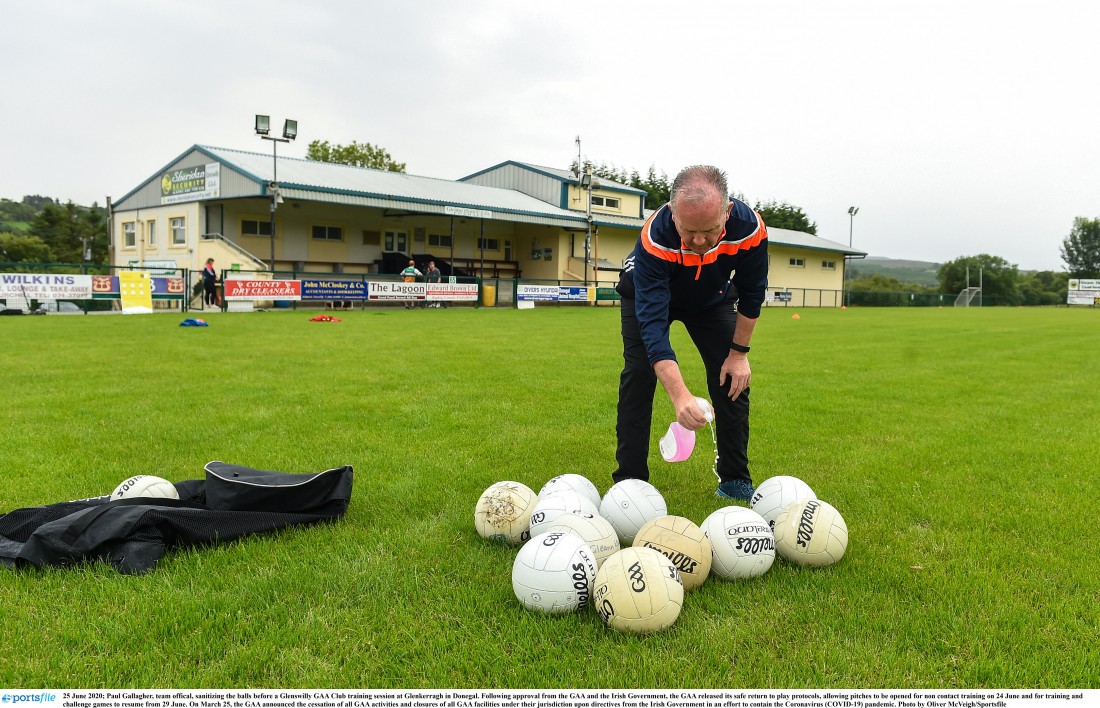 THE ‘new normal’. It’s a term that is very much part of everyday life right now and most likely will be for the foreseeable future.

The ‘new normal’ impacts on every aspect of modern day life whether it is work, social, sporting or otherwise. As the GAA has reopened across the country in the last few weeks, there has been a ‘new normal’. Coaches of nearly every club senior team that I have heard of are dealing with numbers of over 40 players!

It’s amazing what a three-month lockdown, coupled with a shortened season of 12 to 14 weeks maximum in summer weather, can do for fellas’ appetite to play football.

I am hearing stories of clubs with bigger numbers having 60 or 70 at training and the standard club, which usually has 25 to 28 players on any given night, is regularly hitting in-and-around 40 players.

Managers are frantically ringing around looking for friendlies with the opposition having to provide two teams. In-house training games are having to be played under conditions of 17-a-side or maybe working with subs. It is just something else to add to the list of unusual things to occur in 2020.

The trick here for club management, in terms of managing these sorts of numbers, is to see it all as a positive. It would be easy to lament and say there is no way you can work with these sorts of numbers but given the year that is in it, trying to get young fellas to commit might not take much coaxing.

Across the board, the aim should be trying to keep everyone connected with the club with one eye on the future. There will come a time when a manager is ringing around looking players for a 15 v 15 game in training or trying to make sure he has the 32 players needed for back-to-back reserve and senior games. If a manager plays his hand in the right way now, this job will be a lot easier in the future.

I can see it in my own club. We have a pile of fellas bursting to play football and I know that many other clubs are in the same boat.

Having played a few friendlies in the last few weeks, the main priority has been safety. After that we are just trying to maximise game-time for all our players in the fairest manner. We are in the lucky position where we have club men in charge and it’s time like these that we are thankful for that. They want to see everyone develop and are trying their best to navigate their way through this, while trying to remain competitive and trying to be fair to everyone on the squad of 40.

Hopefully now that the country is opening up a bit and people are starting to get some sort of a social life back, they will still see the benefits of the GAA and continue to come out in their droves.

While I understand that clubs with big numbers will have to choose squads at some levels this should be seen as a welcome headache for club managers.

The reasons for playing Gaelic will differ from wanting to be the best and being ultra-competitive to it simply being a social thing to get out of the house for exercise. Between those two ends of the spectrum it is up to the manager to decide what he needs, but if a player is willing to commit in any capacity this should be welcomed and encouraged.

If a manager starts selecting training squads in clubs where this would not normally be the case then this can be a dangerous slope to start on. Given we are still in the grips of a worldwide pandemic and trying to come out of it, some fellas may just be using the GAA as a release.

Natural selection will occur in these cases and these fellas will soon slip back into their normal routines, which may not involve GAA, and that’s the issue solved for the manager.

For the year that is in it, some managers might just have to persevere with bigger numbers. This can be difficult to manage at training but clubs should be making every effort they can to support a manager in this scenario.

Some clubs are lucky enough to have a thirds team where it is purely social football and some players might be gently persuaded to go this way. It takes an awful lot of work to run all this but put in the hard work now and it will pay off in the long run.

Once a club team starts being selective, people can have very long memories. The next time you are needing players to help out to fulfil a fixture, someone to help with the u-8s, someone to knock doors and sell tickets or to give their spare time, they will look back and wonder where the club was when they just needed the release of playing football.

Given the year that is in it, a lot of clubs can look at this and see it as a chance for a quick championship. No need for the eight-month grind and pre-seasons in the dark. A quick three-month season in the summer and your name could be added to the roll of honour.

However, it could also be a way of a lot of fellas seeing what they have been missing when GAA was taken from them.

Getting that reattachment to their local GAA club might be something that reaps dividends for all parties in the years to come, so there is the need to look beyond the next 12 weeks.