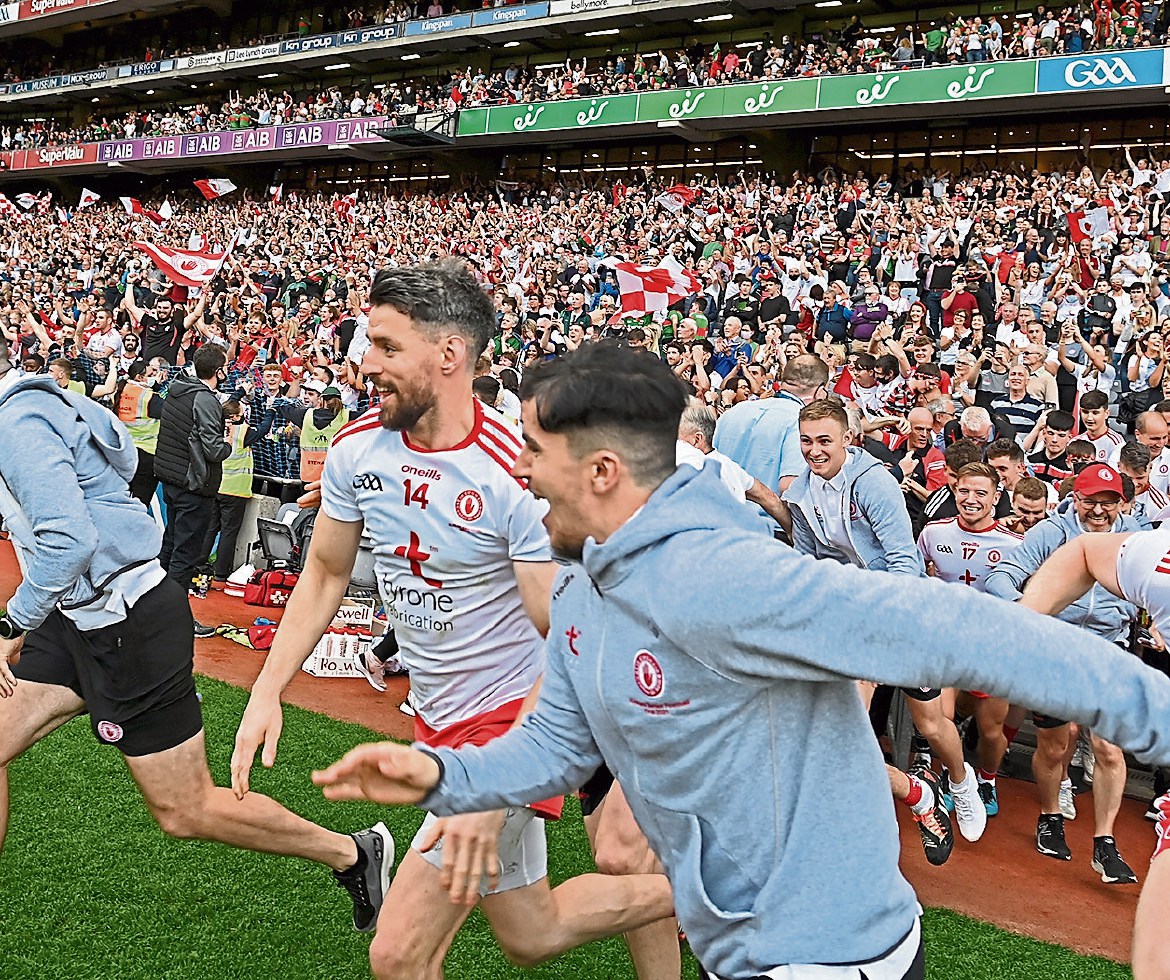 WE DID IT...Mattie Donnelly and other Tyrone players storm the field at the final whistle, after defeating Mayo in the All Ireland final. MC 70

AS the county season has officially drawn to a close, bar a few underage titles, I’m sure we can all agree that the perceived shocks on either side of the game in the men’s and ladies football definitely made for a more interesting end to the season.

The Tyrone story is interesting. I can’t remember an occasion when a team won an All-Ireland after initially being expected to lose, yet go on to gain so much credit and respect in the aftermath.

That is not a personal jibe at Tyrone as it’s no secret that a lot of people would have liked to see Mayo get over the line. Had it have been any other opposition most might have been indifferent as to the destination of the Sam Maguire. But given Mayo had lost five finals in previous nine years, with some players playing in all five, there was a groundswell of support for Mayo throughout the country.

However, sport can be cruel like that and it just wasn’t to be for Mayo. While watching the match, there wasn’t really one period where I felt that Mayo really were in control of the game. They have had such periods of dominance against Dublin in recent finals only for Dublin to be able to turn the tide but they never seemed to really make Tyrone chase the game. While playing at such a level can never be described as comfortable, Tyrone always seem to have a measure of control and composure that Mayo did not have. The question for Mayo is what do they do now – where do they go from here?

James Horan has done a terrific job in integrating new players to the squad. Their team is virtually unrecognisable from 18 months ago.

For a lot of those players it was their first taste of an All-Ireland final so that will stand to them. Nevertheless, there just seems to be something amiss there and it’s hard to put your finger on what it is.

Was the loss of Cillian O’Connor too much for this young side to absorb? Given he is the all-time leading scorer it’s bound to rock the team in some way, especially a team that is blessed with an abundance of middle third runners and players suited to that type of game but one which has a lack of quality incisive forwards.

Teams have to learn to adjust and they played virtually all the championship without him. It’s not as if it happened in the semi-final so they had a few months to prepare.

The big question on a lot of people’s lips has been the Aidan O’Shea conundrum. There has probably been too much made of his second-half display in the final without looking at depth the game as a whole.

He was probably in Mayo’s top four/five players in the first half, exerting influence on a number of scores by either playing in the final pass, winning the initial ball in or winning the free. However, the wide he kicked in the first half, and the chance of a goal where I do feel he was going for a point where McNamee blocked his kick, will leave an imprint on the mind as they were so prominent.

I suppose it is hard to say but had that chance have been presented to Aidan in the Connacht championship versus Sligo, I feel he might have dropped the shoulder (McNamee had already committed himself) and literally ran over the top of the Sligo players and tucked the ball in the net. My only thought is that he has sized McNamee up previously and in the tackle you know how strong or aggressive a player is and he just didn’t feel comfortable in attempting to take him on so trying to clip a point was his best option.

From then on, O’Shea just didn’t look like he was going to impose himself in the game. Though it can be said that two shots blazed wide by Tommy Conroy and Bryan Walsh in the second half were perfect opportunities to play heads up football and just take an extra second on the ball and O’Shea was free across the large square for a tap in. Had O’Shea have been in the light blue of Dublin there is a fair chance that would have been palmed into the net.

As for Tyrone going forward, while I would not predict a new era of dominance, I certainly can see them getting over the line and jumping above both Down and Cavan in the next few years on the Ulster role of honour. Given the age profile of their team they certainly have time on their hands in that regard.

A lot of players in their squad are in around the mid-20 mark and are perfectly primed to kick on over the next few years and improve their game further still. Their management team, which is still very new in intercounty terms, will have time to evolve with the team and progress them even further. They seem to have a football intelligence which is hard to coach. We can all work on the physical aspect of the game but emotionally wise, Tyrone seem to have nailed that area of the game both on and off the pitch.

As a Derry fan, I can remember being a Derry games in the mid-90s whereby the chant from the Derry fans was ‘there is no Sam in Tyrone’ to which the Tyrone fans jeered back, ‘there is no London in Tyrone’. Obviously that was all in good taste and banter but unfortunately for us Derry fans that hoodoo was well and truly broken in Tyrone long ago and now it seems that it may not be too long before they are top of the Ulster tree in terms Sam.