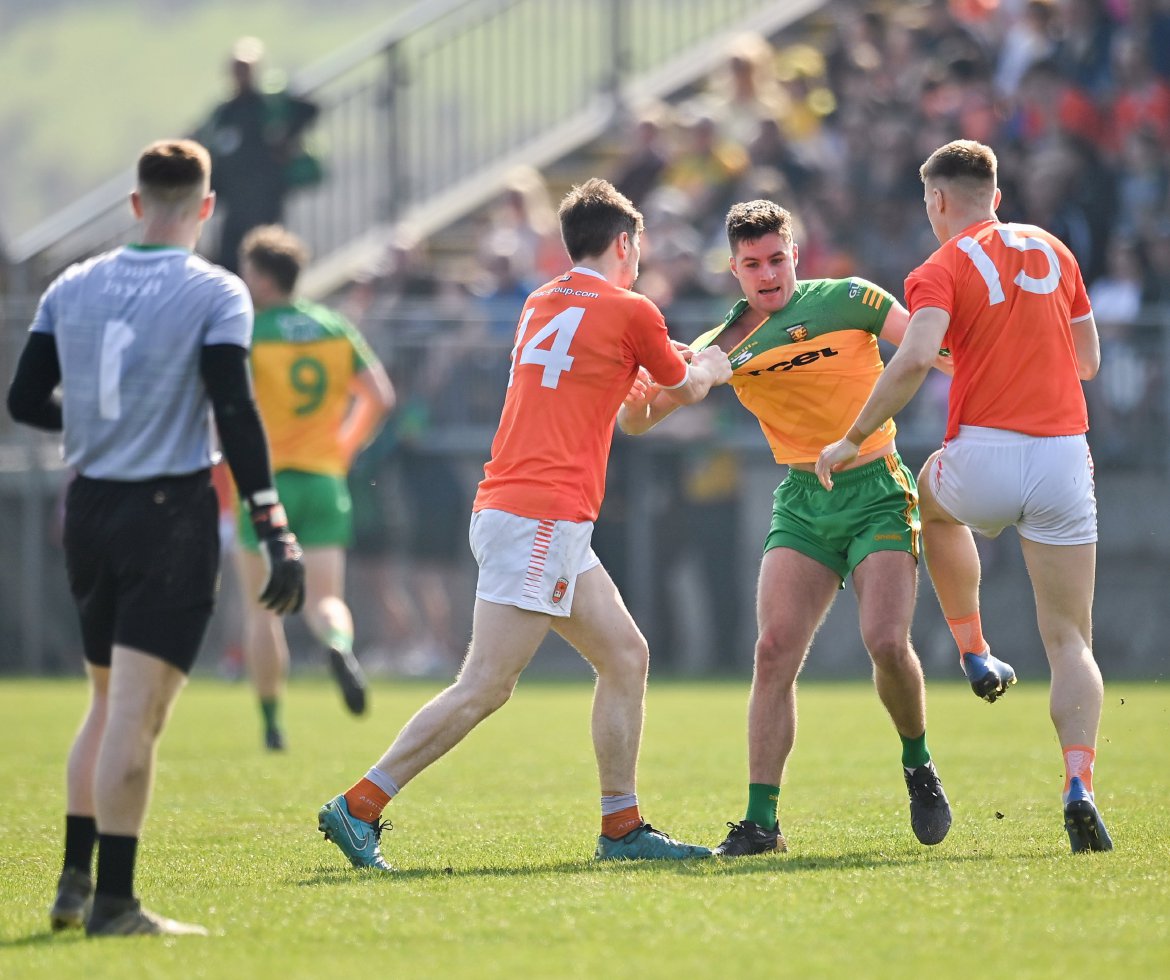 HOT AND HEAVY...Gerard O’Kane is expecting another testy encounter between Armagh and Donegal

WITH Easter coming and going last weekend, it’s hard to believe the championship has kicked off in both codes already.

I have fond memories as a child of going to county games on Easter Sunday and being allowed to take one Easter egg for the journey. Then as I grew up and played county football, there were many times the players had a game on Easter Sunday and either home or away, it was always a chance for a decent bonding session and a night out afterwards as it was a holiday time and the championship would not be starting for six or seven weeks.

While the new structures will take a bit of getting used to, in the long run it can only benefit the club game and hopefully we stop seeing clubs playing in the depths of winter. No matter how well a county does on the national stage, there is now no excuse for county boards letting fixtures run on to the end of the calendar year. It should not be pitted as a club versus county issue with the new structure: after all, while not all club players are county players, 100 per cent of county players are club players and this sometimes gets lost in the narrative.

With regard to the action itself, the script of the football championship played out mostly as we expected. Fermanagh put up a decent showing against Tyrone for the most part but Tyrone’s quality eventually shone through and it can be hard to keep plugging the holes everywhere without the dam eventually bursting.

All credit to Fermanagh, they stuck at it and came back to make it a two-score game again with a few goals. Tyrone will be disappointed with the manner in which they lost the late goals and it will give them some food for thought going into the Derry game in a few weeks. Still, they are maybe happier it happened then as opposed to getting caught out down the line.

Given it was Easter Sunday and as you get older the days of running all weekend are well behind you, I was in the house for the New York v Sligo game and I watched it as it was streamed live on Sunday night.

Again, as per the script, New York put it up to Sligo. I have never been part of the travelling party for those games, but I can only assume all the talk is about getting the job done no matter the performance. That is exactly what Sligo did, nothing fancy and in a tight game they rose their luck a few times before seeing out a four-point victory. Similar to Sligo going to New York, Leitrim had to go to London and in a similar fashion, the motto would have been ‘get the job done.’

No one wants to be the team that heads to either New York or London to get turned over and these can be nervy affairs. Each squad would have enjoyed a bit of valuable time together both pre and post-game and a bit of time away from their home environments so no doubt Sligo and Leitrim will come back stronger for it.

Trying to predict the script for this weekend is a much more difficult affair. The Antrim v Cavan game on Saturday and then the Donegal v Armagh game on Sunday are both extremely difficult to call for different reasons, and both have their own side story to them.

They won all their games in the league with the exception of the Tipperary game, who they then turned over in a league final to lift silverware in Croke Park for the first time in 70 years. While many were always waiting on Cavan to open up a bit more and maybe put 10+ points on a team, they never did it so maybe they were always planning ahead in preparation to how they will play in the championship, and be a little more conservative, especially in the cauldron that is Ulster. If I had to make a prediction and was pushed on it, I just think Cavan still have that little bit more quality than Antrim and would predict a Cavan win by a one- or two-point margin.

The other Ulster game in Ballybofey is sure to be a cracker with fireworks from the off. It looked like Donegal held the advantage, but the news that Armagh will have a full deck to play with has possibly tipped the balance back in favour of the Orchard County.

There are so many side stories in the build up to this game that we hope we don’t get a damp squib of a turgid affair but in fairness to Armagh they usually don’t produce those sorts of games so we will hopefully get a game that lives up to its billing. I’m going to go for a draw on this one, but not knowing who will win out after extra time, it could be the flip of a coin.