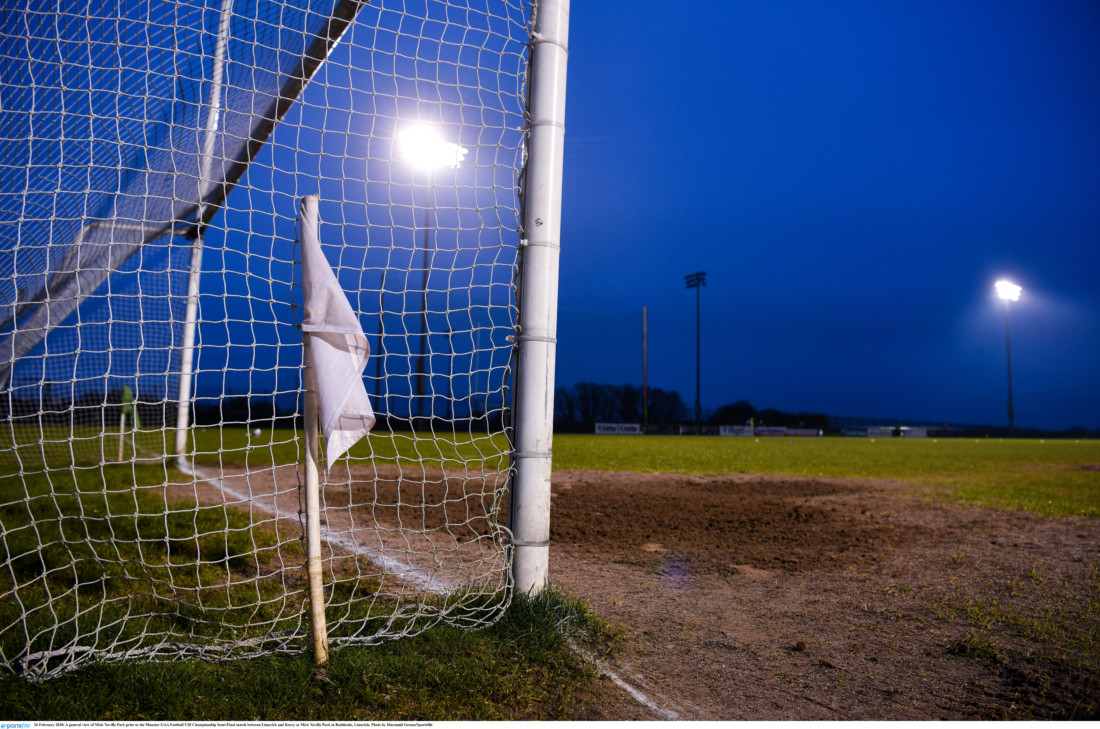 26 February 2020; A general view of Mick Neville Park prior to the Munster GAA Football U20 Championship Semi-Final match between Limerick and Kerry at Mick Neville Park in Rathkeale, Limerick. Photo by Diarmuid Greene/Sportsfile

LIAM Murphy was 70 on Wednesday past. For those of you too young to remember, he rose to fame as part of a Derry defence that held Kerry to 5-14 in the 1976 All-Ireland semi-final.

As Liam said to me this week, there was nothing between the teams apart from those five second-half goals.” The previous year, we had lost to Dublin in an epic National League final by a point, after Seamus Lagan went clean through at the death and crashed his shot off the crossbar. I wept that day at the injustice of it. A few months later, we met Dublin again in the All-Ireland semi-final, losing by five points.

The progress of that Derry team was heavily curtailed by the Northern bother. Gaelic football was a dangerous affair, so the squad trained only once a week at different club grounds, changing times and venues to ensure there was no pattern. They had good cause.

On the way home from that 1976 semi-final, two supporters, 22-year-old Colm McCartney from Bellaghy and Seán Farmer from the Moy, took a short cut across the border into one of the most lethal man-killing parishes of the Troubles. They were stopped at a UDR checkpoint, taken from the car and shot dead. They were murdered by the Glenanne Gang, a notorious organisation comprised of serving police officers, soldiers and loyalist paramilitaries.

Thirty years later, The Historical Enquiries Team, a specialist police unit, concluded in relation to their murders that there was “indisputable evidence of security forces involvement with loyalist paramilitaries which should have rung alarm bells all the way to the top of government. However, nothing was done and the murderous cycle continued.”

In total, there were 25 police officers and soldiers named as being part of the gang, including the leader John Weir, an officer in the RUC Special Patrol Group. In total, they killed 120 Catholics, “almost all of whom were civilians with no links to Irish Republican paramilitaries.”

While we were training once a week and varying our routines to stay safe, Mikey, Paidi, Ger and the boys were training five times a week and weren’t thinking “Is this it?” every time they came on a police checkpoint.

Funny thing. Instead of deterring us, it spurred us on. The GAA in the North flourished like never before from 1969 onwards. Club and community became the most important thing in our lives. It is no coincidence that 21 years later, Ulster teams were ready to dominate the game at all levels.

Liam – sporting a moustache that Burt Reynolds spotted on a visit to the town and subsequently copied – went on to play a big part in the Dungiven team that won back-to-back Senior Championships in 1983 and 1984. Those men were my heroes.

In 1982, I played for the u-14s that won the championship in the curtain-raiser before the senior final between Dungiven and Ballinderry. The referee’s report from the drawn senior final, which was preserved by the late Niall Hassan, begins as follows:

“This was one game not played in the spirit of the Gael. Indeed, had it not been for the fact it was a county final, I would have called a halt to proceedings after 10 minutes by which time there were at least seven fist fights going in various parts of the field, some involving supporters.”

This was no mere game. The previous year, our senior hurling captain Kevin Lynch had died on hunger strike. Our honour and courage was on the line. What sort of men were we? What were we prepared to do? The throw-in was greeted with a primal roar from the huge crowd.

A few minutes later, a high ball came into the Dungiven square, and our goalie John Somers (who starred for Derry and Ulster for over a decade) rose and took it in his chest. As he did so, the Ballinderry full-forward drove him into the back of the net, knocking him senseless. As the Ballinderry player was getting off the ground, Liam Murphy, enraged, struck Big Adrian with an uppercut that knocked him out cold.

As Liam said once about the regular Dungiven full-back trio of Bradley, Kelly and Murphy, “We might not have been the greatest footballers, but we kept a very tidy square.” As our fearsome corner-back, Martin Bradley used to say to me at training when I joined the squad in 1986, wagging his finger, “Trespassers will be prosecuted Brolly.”

How that 1982 final got to the finish I will never know, but it did, before a replay the following week that was even worse, with spectators jumping the wire throughout and so many incidents our heads were swinging left and right like a tennis audience on fast-forward.

Christy Grieve from Dungiven broke a leg. One of the Ballinderry boys got stretchered. My cousin Peter Stevenson (Derry captain and all-Star in 75/76) busted his man and got chased up the field by an irate Ballinderry supporter waving an umbrella.

The game was stopped to allow the St John’s ambulance onto the field. The two stricken players were carted into the back. As the paramedic was closing the doors, Eugene Hassan, Dungiven’s centre-back, surveying the mayhem, said “Hi sir ( We are a very polite lot in Dungiven, we refer to each other as “sir”) Would you not be better waiting until you have a full load?”

Both teams were disqualified. But Dungiven had made our point, and we made it again, winning the next two championships in terrific style, my Uncle Eunan’s sharpshooting the difference. He was my hero.

When I made my debut for Dungiven as a 17 year old, it was the greatest day of my life. I was bouncing in the changing room. Eunan had had a big night and was not in great shape, pale and chain smoking.

I was named at right half-forward. He was right corner. As we were going out onto the field I said “Our boy, have you any advice for me?” He took a long drag on his cigarette, blew smoke into my face and said “Don’t give her to me, unless you’re absolutely snookered.”

Andy Murphy, Liam’s brother, managed that team. There were four Murphys playing on it at one time. Andy, Liam, George, and Plunkett, who was a fabulous high catcher. He took a high catch one day against Bellaghy at St Canice’s Park that was so gravity defying I said to him going off at half time “That was the greatest high catch I have ever seen.” He said “Young Brolly, I was up that high, I saw your Aunt Mary K turning down the Teeavin Road in her purple Volvo.”

Another time, we were playing a Kerlin Cup match against Banagher. The Kerlin Cup is a North Derry 13-a-side knock-out, which Dungiven won more or less every year. The game was played on a Monday night. There had been a championship match the previous day, so there were a lot of hangovers and the bare 13 turned up.

Andy, player manager, took a long draw on his cigarette, said “Me and our Plunkett will play midfield, George full-back. Liam full-forward. The rest of you boys fan around.”

You never look on the world again like you did when you were 14 or 15. Things are never so vivid after that. The Bomber Liston. Maradona. Marvellous Marvin Hagler.

Best of all. The Dungiven seniors of the ‘80s and their very tidy square.