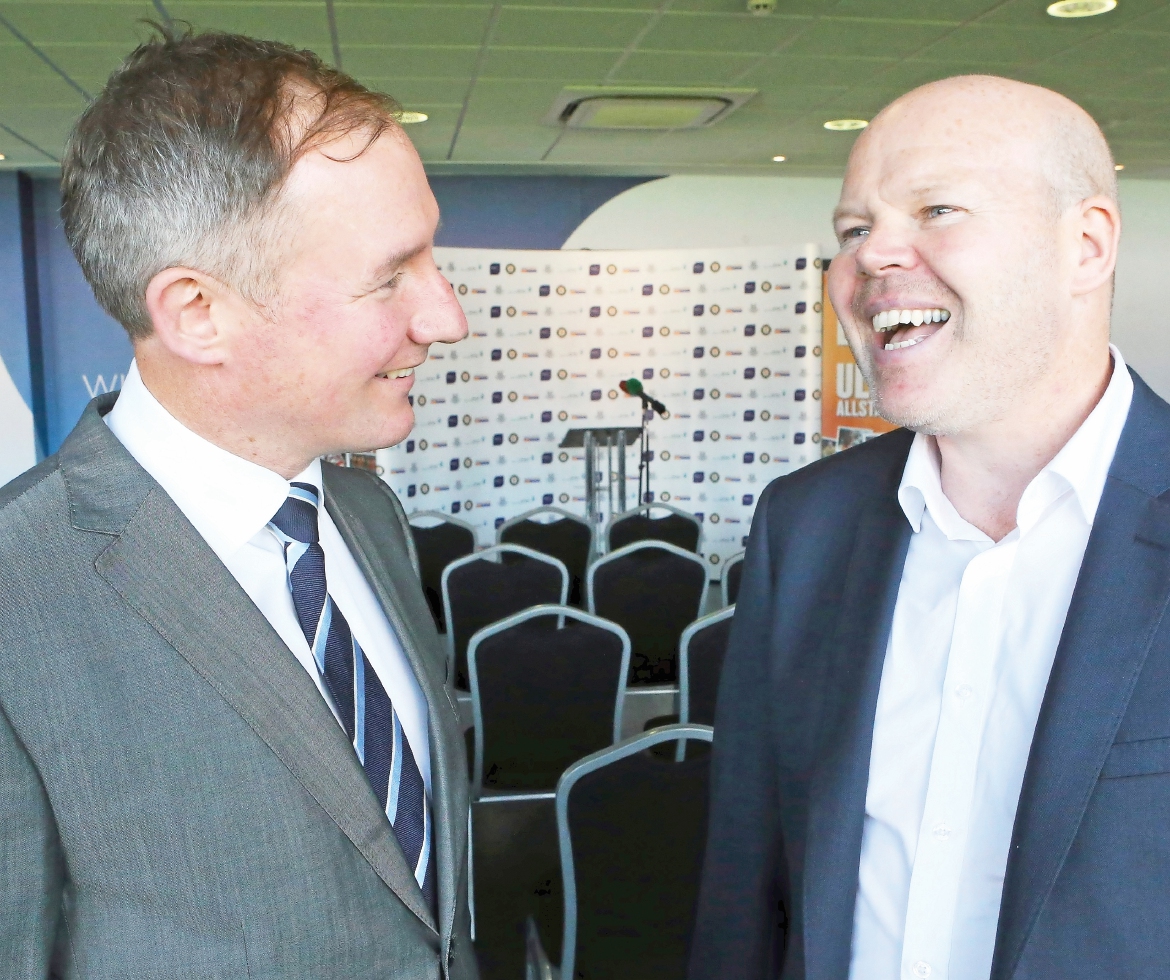 LIFE IS FOR LIVING...Anto Finnegan didn’t countenance self-pity after being diagnosed with MND

SHORTLY after he had been diagnosed with motor neurone disease, I said something dumb to Anto Finnegan along the lines of “what terrible luck.” He said to me “There’s nothing to be sad about. I have a great life.” In June of 2018, by which time he was in a specialised wheelchairbody machine that could raise him up into a standing position and all the rest, he rang me to say he wanted to go to the first round of the championship at Celtic Park. Derry were playing Donegal. I rang the Derry Board and they made all the arrangements. Anto arrived in his van with his son Conall a few hours before the throw in, emerged from the rear and parked himself outside Mary B’s bar on the footpath. For two hours, we laughed and reminisced on the street, Anto sucking down bottles of lager out of a straw as Conall held the bottles. He would nod to his beloved son when he wanted a sip. Conall would tenderly move his head forward. He would drink. Then give the signal and Conall would move his head back against the headrest of the machine. People were queueing up to say hello. “Don’t sympathise” I warned them. I introduced him to Paddy McGurk as “the man who held me to 10 points in an Ulster club semi-final.” “You’re an exaggerating b******” he said, “It was only eight.”

Once, I was making a speech at the unveiling of the Terry Enright mural at Gort na Mona. The speech was carried online. I talked about Anto and his example. I said that although he was dying, he was living life to the full. That night he rang me. “I didn’t like you saying that’ he said. “I’m not dying. No more than you are.” “I’m sorry” I said. “It’s okay Joe, just don’t say it again.”

The Tyrone lads are emptying the beer bottles to some tune and why not? Seeing the images and video footage of them flying along on the magic carpet of All-Ireland victory brings me back to that glorious fortnight after winning the All-Ireland. We won Ulster championships and National Leagues (four of them) and all the rest, but life goes on after those. With an All-Ireland win, the world stops. Briefly. But it stops. Time has no meaning. You are wafted along on the joy and admiration of the country. You have no responsibilities. Work? Who cares. Sleep? Pah. Women who normally wouldn’t look twice want to make love to you. Men want to drink with you. People want to hug you and pat you and shake your hand, as if some of it will rub off. For that brief moment, you are in a cocoon. Untouchable, serene, removed from all worldly cares. It is a wonderful time, even if it cannot last. As Enda Gormley said, “Enjoy it boys, next week we’ll be ugly again.”

This week we got a glimpse of the players behind the Tyrone machine. Conor Meyler talked about his dangerous obsession with the game. How he had broken down constantly with hamstring injuries and his belief that training twice a day and applying himself even more furiously was the solution. Then, the breakdown, the tears, the private suffering. He sought help, and with that, came the realisation that without balance in life, sport can be self destructive. He began to socialise. To relax. He embarked on a PHD. His sporting life, and more importantly his quality of life, was transformed. In the renowned painter Bobby Ballagh’s excellent autobiography, A Reluctant Memoir, he tells a story about his father Robert, an extraordinary sportsman, who played cricket and tennis for Ireland, and rugby for Leinster. In a vital Davis Cup tie, Ballagh senior was drawn to play the singles match against the Japanese number one and team captain. To the surprise of the tennis world, Ballagh won. On the Japanese team’s voyage back across the Atlantic, unable to cope with the shame, their captain threw himself overboard and disappeared beneath the waves, never to be seen again. Ballagh senior told the story to his son as a warning against the dangers of taking sport too seriously.

When Logan and Dooher took over in Tyrone, with Peter Canavan as the third man, the foundations were already in place. By that, I mean, fanatical players dedicated to the cause of Tyrone. After their three All-Irelands in the noughties, where they played exhilirating, adventurous football, I think Mickey Harte became scarred by serial defeats to Jimmy McGuinness’ and then Rory Gallagher’s Donegal. He over-reacted, moving the county team to an ultra blanket defensive formula that stifled creativity and reduced forwards to an after-thought. After the 2014 semi-final ambush, Dublin learned how to penetrate zonal defences and by 2015 they were making muck of them. The 2017 semi-final was the highpoint of the football v blanket defence debate. Tyrone arrived onto Croke Park with what was the most formidable zonal defensive formation in the history of the game, keeping a maximum of one forward in position (5’6” Mark Bradley). Dublin cut them to pieces, slaloming through them with some of the most delightful football ever seen, winning 2-17 to 0-11. As I have previously written, one of Dublin’s great advantages during their six-in-a-row run was the fact that most of the competition (save for Mayo and to a lesser extent Kerry) had fallen for the zonal-defence fallacy. I also constantly bemoaned the waste of good footballers in Tyrone, describing them as the lost generation. In 2018, Darren McCurry opted out altogether. Jimmy’s ingenious con brought Donegal an extraordinary All-Ireland. But it was a con.

Turns out McKernan, McNamee and Hampsey didn’t need help to mark their men. On countless occasions, when their men took them on in the semi final or final, they steered them expertly onto their wrong side and ushered them down cul de sacs until they either dispossessed them or forced them to turn back and handpass the ball to a colleague. Throughout the game, the trust in the players, attacking mindset and the subtlety of the coaching work on the training field was obvious. The man in possession looking up, waiting for the forward to cut back before delivering a subtle pass. The movement up front, with the forwards working together. In my mind’s eye, I could see Dooher and God at Garvaghey, intently discussing the forward movement, the dummy runs, the change of angle, the pause before execution, the preservation of the space inside the D, then running through scenarios with the group.

The new ethos of the group is not an accident. After the semi-final, when Tyrone had two black cards that left them playing with 14 men for 20 minutes, Dooher said he was not happy with the two players, and he would be talking to them about their behaviour. “It is not something I want to see again.” No play acting. No nasty stuff. I played with and against Feargal Logan. He is Greg Blaney’s cousin, and they share a pure ethos. In the final, the best I can say about Tyrone was that they played like Dublin, with the calm air of an honest group focussed on a higher purpose.

The final was mostly a matter for Tyrone and Mayo, but what matters most to all of us is the health of the GAA community. More important than Tyrone’s great win is the impact it ought to have on the rest of the country.

Their philosophy should inspire county boards to go back to the philosophy of self help, of investing money in grass roots not managers and spongers and of rooting out the corruption and brown envelopes and side deals that have become endemic in our games. Crucially, it should inspire coaches all over the country to go back to real football. Skill based, man to man, football that encourages creativity and self expression and real contests. The people of the county look to their senior team to represent them with honour and integrity and excitement. As we saw with the Dubs, and now Tyrone, this is only possible when the culture is right and when a team is playing the game without boundaries. Sport after all, is merely a metaphor for life.

Anto and me talked on the phone a few weeks ago. He never mentioned that things weren’t good. Why would he? He wasn’t dying. He was living. Life lasts as long as it lasts. As these young Tyrone men will tell you, the trick is to live it to the full. To love and play and give it everything you have. And to suck the beer out of the bottle with a straw until there is nothing left to suck.