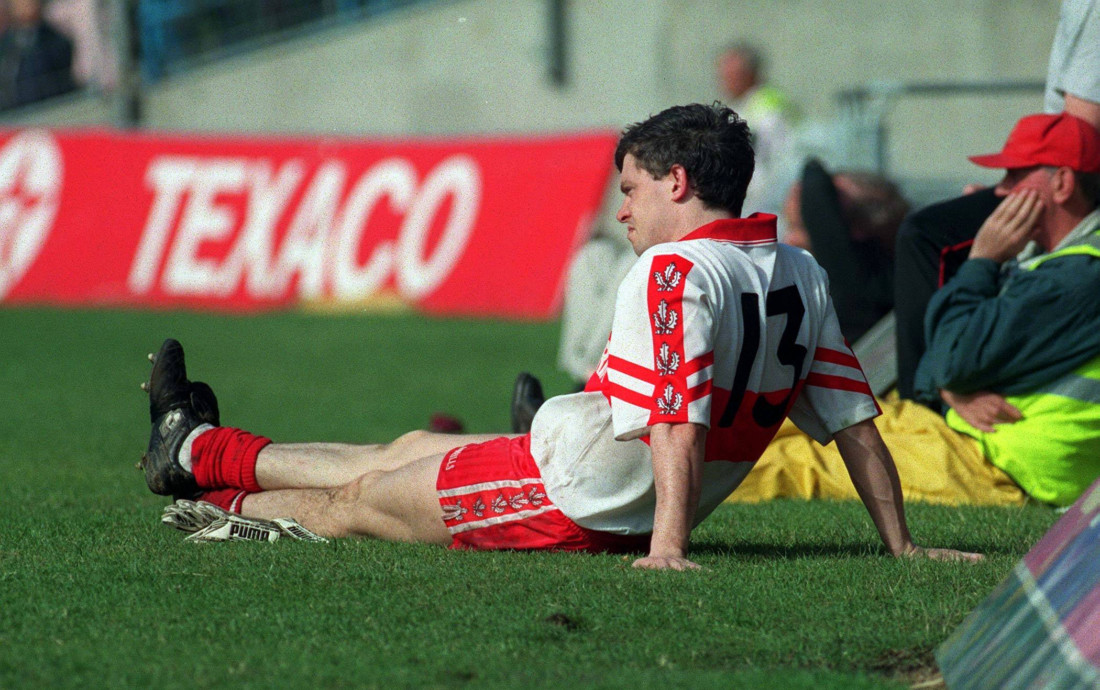 27 August 1998; Joe Brolly of Derry sits on the sideline after he was taken off during the Bank of Ireland All-Ireland Senior Football Championship Semi-Final match between Derry and Galway at Croke Park in Dublin. Photo by Damien Eagers/Sportsfile

MALLOW News got a jump on the media pack last week, carrying the GAA announcement we had all been dreading.

“The GAA has ruled that NO collective training will take place until after Easter, with the exception of all secret training, which shall continue as normal.”

This will come as a relief to many counties, who have been going back to smuggling methods last used during the Troubles. Photographs emerged recently allegedly of county training, tackle bags and all, taken from a vantage point high above the pitch, with the venue named.

Interestingly, there were no cars in the car park. Instead, there was what looked like a lone cattle truck. Presumably with speakers playing cow sounds. A kit van, as Mayo discovered in December, just isn’t big enough.

The bad news is that all the clever subterfuges may be in vain. The big problem is the snails-pace of vaccination in the South, which is in turn down to the absence of a viable plan. Not so much operation warp-speed as operation any chance of a push?

By the February 16, according to the BBC News, just over 430,000 people in the North have received their first jab, equating to 24% of the population. The average per day here is now over 13,000 and accelerating.

Meanwhile, in the South, the figure is 170,000, equating to 3% of the population. The North’s Chief Medical Officer Dr Michael McBride has said that a return to normal will only happen when we hit the target of 70%-80%. In our case, at the current rate this means mid May 2021.  However, given the spectacular success of the UK vaccine task force in procuring and manufacturing the various vaccines, it may well happen before then.

As things stand, the only county Gaelic football played this year will be a Six Counties Championship. The last time that happened was during internment, when my father captained the Derry internees team that defeated Oliver Kelly’s Antrim in the final of the inaugural Long Kesh Cup. Sadly, the referee’s report is not available.

In this pandemic, exercise and reminiscence have never been more important for mental health. Just this week, footage emerged on the BBCNI website of Enda Gormley in his heyday, being interviewed before the championship.

Dressed in a loose-fitting denim shirt and a pair of white trousers with multi-coloured pin stripes, is it any wonder the critter is still single? What a footballer he was and what a man.

To keep the black dog at bay, I have taken to running every day. Last week, donning my Under Armour skins to do my 5k in the snow, I reflected proudly that to the best of my knowledge, I was the first sportsperson on these islands to wear tights.

We were set to play Kildare in the league at Ballinascreen. It was a bitter day in the Sperrins, around -5. Suddenly, it came to me.

Me: Can I borrow a pair of your tights?

Mother: You’re not right in the head.

The tights were put in the kit bag and off I went. As I rolled them on in the changing room under the stand at Dean McGlinchey Park, Eamonn Coleman chuckled and said “Jesus Christ Jodie, you look like Danny LaRue.”

The game that followed was christened the Battle of Ballinascreen. Gary Coleman got hacked down from behind during the first half and got a very bad leg. I rang him during the week and he told me “I remember it well. I was carried into the changing room on a stretcher so I missed all the fun.

“I was in shock. A very strange experience. At the hospital I got 40 stitches in the wound. Some scar now. Could you get me a few pound for it?”

I contacted Kildare captain Glen Ryan to get his memories from the day. “Write them down and text me,” I said. “Ok, give me half an hour.” Half an hour later, my phone beeped.

“It was the coldest day I ever played. Also the scariest. Anthony Rainbow got hypothermia and had to be carried off. Frances Daly wrapped him in a tin foil blanket and my mother came down from the stand with a flask of soup to try to warm up his core.

“In the first half, Sean McGovern tackled Gary Coleman and caused a huge cut in his calf. Eamonn went mad. The big crowd went ballistic. We were spat at. Had sandwiches, newspapers and cups of tea thrown over us going in at half time under the stand.“We were told we were Free State bastards and to go back home to the Free State.

“Our supporters had the wing mirrors of their southern reg cars broken off after the match. And in the second half, after what happened Gary, you bate the shite out of us on the field and the ref let it all go. Just your average day out up there at the time. The saddest thing about it was that those tights actually suited you.”

If only I had patented the idea.