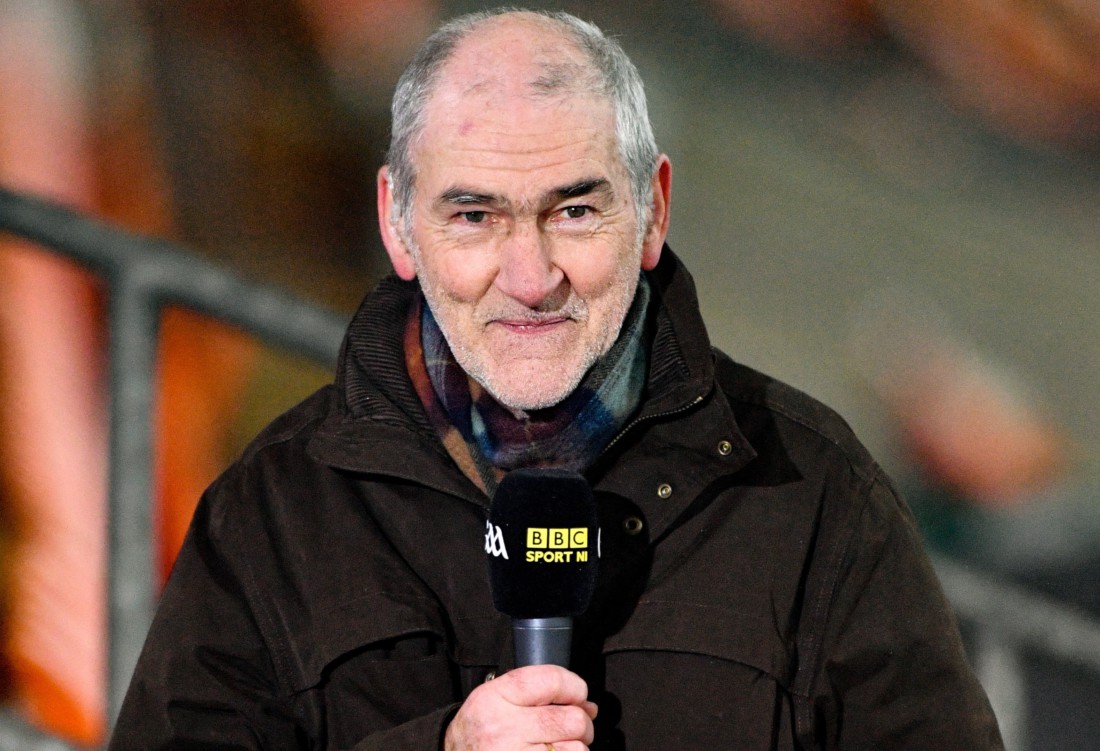 15 November 2020; Former Tyrone manager and BBC Sport pundit Mickey Harte ahead of the Ulster GAA Football Senior Championship Semi-Final match between Cavan and Down at Athletic Grounds in Armagh. Photo by Daire Brennan/Sportsfile

HE BBC started their championship program on Sunday with a great discussion on the rise of Tyrone since 2003 and the end of an extraordinary era, between God, Mickey Harte and Oisin McConville biting his lip, his face frozen in an expression of grim politeness.

It was a most enjoyable reflection on a story of extraordinary excitement, thrills, revolutionary football and Greek tragedy. In short the whole gamut of life, death emotion and Owen Mulligan.

It took Mickey – whose spiky, humorous, combative, warm personality makes him always fascinating – a while to warm to Mark Sidebottom, though Mark as he always does managed to win him over using his best puppy dog expression.

Better still was the fact it was all uninterrupted. No ads, no for-the-sake-of-it video clips, and best of all no competitions. On RTE meanwhile the competition was: Which of these people plays for the Dublin senior football team: A. Philip McMahon B. Phillip Schofield. C. Philip Seymour Hoffman D. Prince Philip. Entry fee €3. No Northerners.

As for the match, Down soloed and hand-passed their way to defeat in the time honoured Tally fashion (no coincidence that Galway did precisely the same in the RTE game).

It was an excellent second half from Cavan, for whom I have had a soft spot since Pat Faulkner kicked me up in the air and Joe Dillon caught me over his head in the 1987 Ulster Club semi-final against Kingscourt Stars.

It will be the high point of Cavan’s year.

It is a truth universally known that Kieran McGeeney’s teams do not perform in championship. This tradition continued at Breffni Park on the day before the Cavan game, with Donegal playing a virtually perfect game.

Last year against Mayo in the winner-takes-all ‘Super 8s’ finale, this young Donegal team wilted, leaving Michael Murphy to soldier alone. A few weeks later I was chatting to Michael at Croke Park, where he was forlornly watching the semi-final. “The young boys couldn’t cope,” I said. He didn’t say anything. Just shook his head sadly.

The reason that Dublin are the game’s dominant team is that they have achieved the correct balance between defence and attack. Their system involves constant attack.

Unlike most teams, when the Dubs go ahead, they do not drop back to protect the lead, which in turn promotes anxiety and can result in a good team losing confidence and squandering a winning lead.

We saw this with Kerry last week, panicking because Cork had run through the middle against them a year ago in Munster. Most teams lose their nerve in the face of a very strong forward line or quality attacker. So, when they face David Clifford he becomes the focus of their game-plan. The Dubs on the other hand merely mark him as normal, trusting their game-plan.

If he scores 0-5, well then he was going to score 0-5 anyway. Which is precisely what happened in last year’s replayed final.

The stress test of a team is how they perform against underdogs. This is where you see if a team is arrogant, complacent, disorganised in key aspects of the game etc. So, Dublin annihilate them, as they did Westmeath a fortnight ago and Laois on Sunday evening, two awesome, mistake-free performances demonstrating a team that is at the very peak of its development.

Brian Howard, Paul Mannion and Cormac Costello came on as subs against Laois, with Costello kicking seven points from all angles off both feet in the space of 15 minutes. It was another mesmerising demolition of underdogs by the perfect football team.

In Breffni, Donegal did the same sort of number on Armagh. Like Dublin, they are a happy team, playing freely, with adventure and confidence. Declan Bonner’s charisma and personality is at the heart of this. Along side him, Stephen Rochford has created a superb attacking style of football, reminiscent of his work with Corofin. The players are trusted to play. Therefore they play without fear.

Like Dublin, every part of the game plan is sound. Here, Patton’s kick outs were audacious as always. His first – wind assisted – travelled 85 metres. In 1967, Pat Jennings scored a goal direct from the kick-off against Man Utd at Old Trafford. At times in Breffni, Patton was not far away.

The kid plays with the relaxed air of a scruffy schoolboy, messing around with his pals waiting for the bus.

One could imagine him playing the entire game with a fag hanging out of the corner of his mouth. On Saturday, he quarter-backed Donegal’s victory with a simply awesome display, delivering the ball to all parts of the field as if by remote control, leaving Armagh players scampering around like dogs chasing aeroplanes.

Meanwhile, Donegal broke the Armagh kick-out. In one first half spell, they turned over five kick-outs from six, ruthlessly punishing Armagh with four points.

They are very easy on the eye. Three times in the first half, superb long kick passes were gathered by a Donegal forward coming skidding out on his knees like Travolta on the dance floor or Fergal McCusker in the Bot circa 1992. Each time, a different forward converted the mark.

It was an overwhelming display of skill, invention, pace, power, hard tackling, hard running and some electrifying individual moments (eg Mogan’s goal when he burned the Armagh defenders in a manner reminiscent of Jack McCaffrey).

Paddy McBrearty was brought on near the end but I am not sure he fits in to this selfless, inventive, workaholic young team.

For a second consecutive Ulster Championship game, Michael Murphy barely touched leather, which ironically must be a source of delight and satisfaction for Bonner.

Like the veteran Peter Canavan nudging Tyrone’s brilliant kids to their first All-Ireland in 2003 despite being on one leg, Murphy was reduced to the role of reassuring presence as his young colleagues played terrific football at both ends of the field.

Shakespeare wrote “The younger rise when the old doth fall.” Well, I don’t want to seem uppity, but they only rise if they are good enough and properly managed. Donegal showed here that they are both. Suddenly, Dublin have serious opposition.