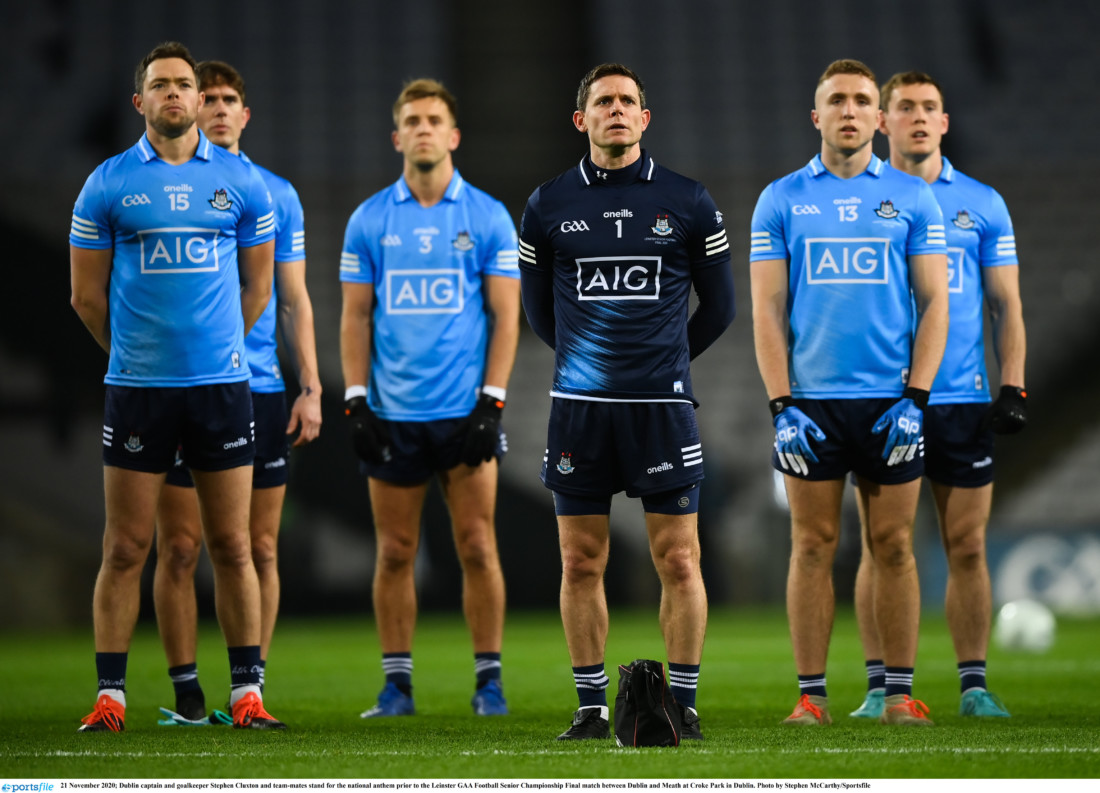 21 November 2020; Dublin captain and goalkeeper Stephen Cluxton and team-mates stand for the national anthem prior to the Leinster GAA Football Senior Championship Final match between Dublin and Meath at Croke Park in Dublin. Photo by Stephen McCarthy/Sportsfile

THE fear is that this semi-final could be more one sided than Trump’s litigation. The current scoreline in America’s courts reads Trump 0 Reality 42, a losing record comparable only to Kilkenny’s footballers in the mid-80s.

The problem for Cavan is summed up by something Colm Cooper said to me once.

“The most intimidating thing about them (Dublin) is that they completely ignore you. They just get on with it. It’s as if you weren’t even there.”

We see this in the way they always steamroll underdogs. The key word being ‘always’. Matches against underdogs are the acid test of greatness. This is because they reveal any arrogance (We are better than them so we will beat them), complacency (They are not good enough to beat us) and their by-product, a lack of concentration.

A good example of this was the 1997 Ulster final. We had destroyed everyone en route to the final, and in particular put Tyrone (who were going for a three in-a-row in Ulster) through the mincer in the semi-final, walloping them 2-15 to 2-3.

Donegal had been beaten unexpectedly on the other side of the draw and to our surprise (complacency) and delight (arrogance) we got Cavan in the final.

We did not play as hard or as consistently as we could. The longer the game remained competitive, our complacency and arrogance turned to anxiety, Cavan – like any underdog – sensed this and fed off it and when they got the goal in the last quarter it was too late for us to recover mentally. We lost by a point.

You may be thinking to yourself, “Ah come on Joe, this was only Westmeath, Laois and Meath.” Which is precisely the way most people and most teams think. But if Cavan were playing them, what would you think?

I watched all three games twice and marveled at Dublin’s absolute concentration. They methodically dismantle the opposition kick-out, win their own kick-out easily, attack constantly and with incredible efficiency, defend ingeniously and with a frenzy that verges on the manic, so that when the opposition has the ball in the Dublin half, the Dubs look as though they are in a state of panic. It is not panic of course. It is on the contrary remarkable second-by-second concentration, which in turn means awareness and alertness.

They guard their goal like starving hounds. Or rather, hounds that do not foul. They have not conceded a goal in Leinster for three years now. I urge my teams to concentrate minute-by-minute, second-by-second. We work on a series of drills and methods to hone this. I tell them that if we concentrate for longer than our opponents, we will beat them, that the game is about concentration. The Dubs are the gold standard.

For me, the two most interesting things about the Leinster final were these. In the 28th minute, with the scoreline 2-12 to 0-4, the Dubs broke a Meath kick-out and James McCarthy launched himself head first after it with zero regard for his own safety. Skidding after it full length, arm flailing at it, he just failed to prevent it going for a sideline.

The second thing happened in the 68th minute. Dublin were leading by 3-20 to 0-9. They won a free 25 metres out slightly to the right of the goals. Dean Rock went through his routine and, surprisingly, very surprisingly, kicked it narrowly wide.

What happened next is the important thing. He didn’t shrug his shoulders, smile and come away as if to say “What the hell happened there?” He didn’t give the impression that it was no big deal, “sure aren’t we 20 points ahead and the game over”.

No, his body tensed in a sort of painful pose and he cursed himself. Twenty points ahead with the game long over, the greatest clutch free-taker the game has ever seen gave himself a furious talking to in the middle of the pitch.

At the final whistle five minutes later, the camera went back on to him and there he was, still chastising himself. He was enraged at his lack of concentration. Enraged that he had let himself down and let his team mates down. Not bemused or with a how did that happen expression.

Instead, he subjected himself to the fiercely honest self-analysis that is the hallmark of truly great teams. He allowed his concentration to wander. He.

Only he was at fault. There was no one else to blame. And no one else would be blamed. He would go back to the drawing board, work harder, concentrate better.

In the Ulster final by contrast, Donegal succumbed to the favourites’ curse. They were complacent and arrogant. When they went three up to recover from their early deficit you could see that they sensed they had it under control now. But as Cavan stuck with them, tackling ferociously and playing with some adventure, they panicked and became a bag of nerves, exemplified by Jamie Brennan’s panicky second-half shot straight at the ’keeper when the goal was at his mercy. Cavan fed off this panic and Donegal could not recover mentally.

This will not happen on Saturday. Dublin do not panic, because they are neither complacent nor arrogant. The underdog usually has the advantage of going harder than the favourite. With Dublin, on top of all their other awesome attributes, they go harder than everyone.

No complacency, no arrogance, no excuses, no blame. This cocoon of concentration cannot be penetrated by the opposition. Cavan must play their own game, with intelligence and adventure, as hard as they can and with the courage and heroism they have shown to date.

They will lose, but unlike Trump and Giuliani, there will be no shame in their defeat.