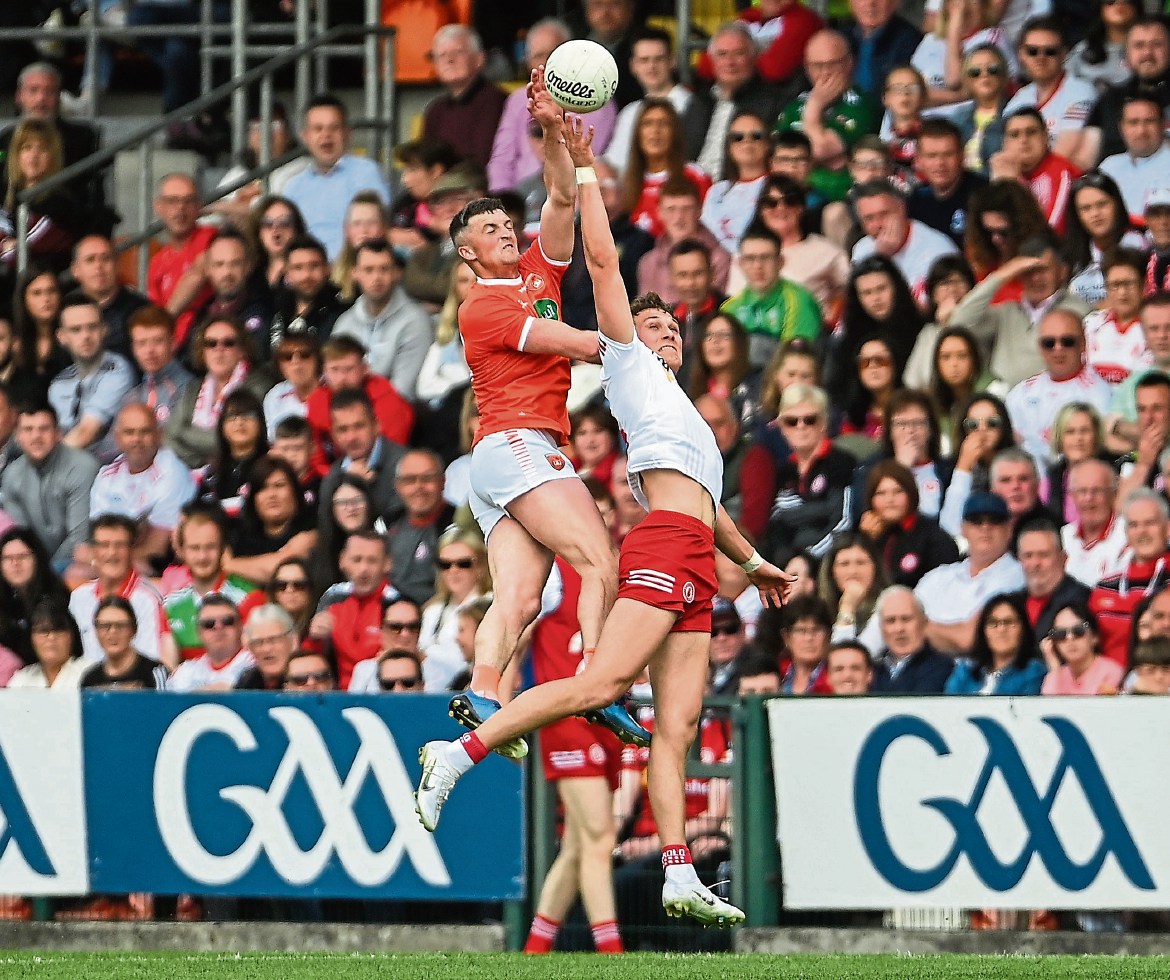 RISING HIGHEST...Armagh claimed an impressive victory over a lacklustre Tyrone

IT was a most enjoyable, 100 mph performance from Armagh with loads of mistakes, silly fouling, some terrific skills and plenty of rousing moments. For most of the first half, they looked as though they were going to throw the game away. Dumb fouls. Rian O’Neill drifting around aimlessly in irrelevant areas of the field, getting easy ball and handpassing it to no one in particular, for no particular reason.

Throughout that first half, Rian looked more like Aidan O’Shea than Brian Fenton. And if that sounds like an insult, it is. Rian is much more than this. Much more. But to be a great player, he must perform in the championship. That means not sparing himself. James McCarthy does not hide. Kieran McGeeney can fill the field with boys who can drift into the half back line, pick up easy ball and do nothing much with it. When Armagh won the All-Ireland, no one was taking the easy options.

Armagh’s tendency to machismo meant that Tyrone got needless frees. They must stop trying to prove how hard and powerful they are. Just play hard and powerful with discipline. There is so much good in their game – adventure, skills, power, great tackling, initiative, strong chemistry, togetherness – it would be a pity if they continue their tendency to self destruct in big games because they get carried away with the crowd and the moment. A good example was a few years ago when they lost to Mayo in McHale Park having played all the football and done all the hard work.

If Tyrone were not such a mess, they would have beaten them. We beat Tyrone by 11 points at Healy Park and it could have been a lot worse. Unlike Armagh, we did not give them a sniff and ruthlessly put them away. The only way they could compete was if we allowed them and we did not. Donegal are soft and are vulnerable. What happened in the Ulster Championship between themselves and Armagh illustrates my point. Armagh played a lot of good football that day and worked very hard, but self destructed because of the amount of stupid things they did.

Big championship days can be very emotional. The good teams keep those emotions under control and play with composure and intelligence. Armagh will beat them unless they beat themselves, something that has become a habit with this talented and motivated Armagh group. We watch them for a ten-minute spell and think “These boys can beat anybody.” Then, in the next ten minutes, we say, “These boys will beat nobody.”

If someone had got into a time machine in 2020 and arrived in 2022, they would not believe that Tyrone are reigning senior All-Ireland champions. It is very difficult to win back to back All-Irelands but this is ridiculous. Against us they were tragic altogether. There was nothing there at all. No discipline, no shape, no motivation, no effort. Nothing. When their name came out of the hat with Armagh, and away from Healy Park (a venue Tyrone hate), they would surely redeem themselves.

They got a goal in the first minute, we thought here we go. In fact it was the opposite. That goal was a consolation score. Not often you see a consolation score in the first minute. After that it was embarrassing. They couldn’t shoot, pass, tackle. Darren McCurry did his best but had zero support. A full forward, even one as good as this, is dependent on what is happening around him and on Sunday, nothing was happening around him.

In the old days before the second chance championship, a great team could be caught in the first round. In 1994, Down beat us with a last minute goal in what Michael O’Muircheartaigh described as “the game of the decade.” We lost, but it was with honour, even if we regret it to this very day.

Had we been given another opportunity a few weeks later, woe betide the team that got in our way. The game after all is about character and honour and integrity.

Something has gone badly wrong in Tyrone.