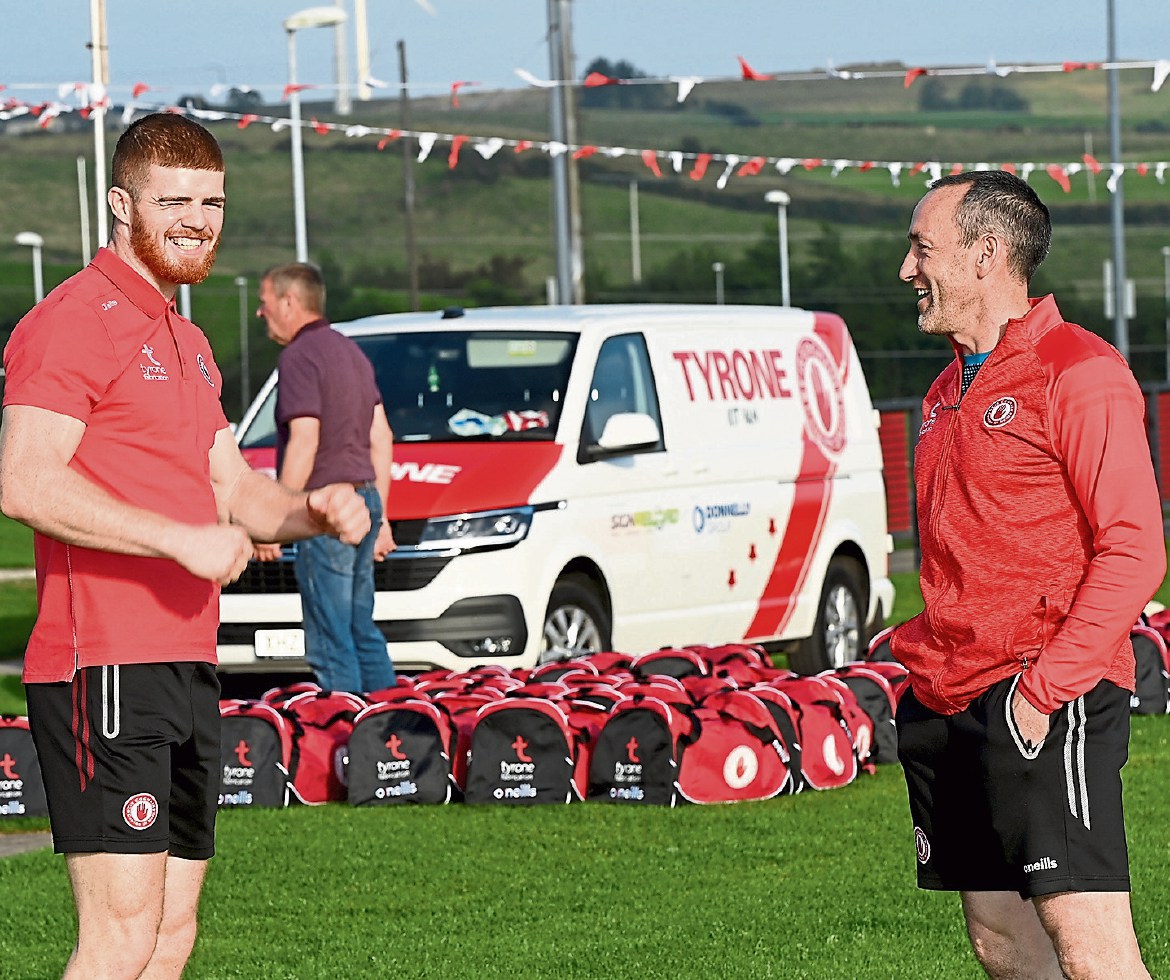 TURNAROUND...Joe Brolly has been hugely impressed by the impact of Brian Dooher, right, pictured here with Cathal McShane, and Feargal Logan. MC 47

DR David Hickey, the Dublin All-Ireland winner and team doctor under Jim Gavin, said last week that if Mayo play Aidan O’Shea in the final they will lose. “Although they will probably lose anyway.”

His point may not seem subtle, but it is. Hickey preached the message to both Pat Gilroy and Jim Gavin that culture is everything. As he put it, “if there is even a small bit of cancer in the group, it will kill it.”

At the highest level, culture is the difference between winning and losing. It is culture that turns a one-point defeat into a one-point victory.

In a dressing room, it is what is unsaid that is important. Players know when there are cliques. They know when some of them should be picked but aren’t and when others are chosen automatically, regardless of performance. But they stay silent. They know when someone with a big reputation talks a good game but doesn’t demonstrate it on the field and off it. They know when individuals put themselves above the group and use the team as a vehicle for self promotion. This simmers under the surface and prevents the collective from being able to achieve high performance on a consistent basis. It creates a political culture as opposed to a high-performance culture.

Sure, the team can play very well now and again, but it is hit and miss. We have seen this with Dublin in the noughties, Mayo from 2011 onwards, and Mickey Harte’s Tyrone post 2010. When there is a political culture, the whole group is undermined because the honest members of the group know it is not a true collective based on high performance.

By 1997, I had won an All-Ireland, two National leagues, two Derry senior championships and a few All-Stars (doorstops).

In the 1996 county final, I had played poorly, and we lost. I was going through the motions. I was a big star. A barrister earning a name for myself. I was talking the talk. In the first round of the Derry championship in 1997, I played around the edges of the game, we drew with Glenullin and were lucky to survive.

Before the replay, as we were waiting to go out onto the field, Geoffrey McNicholl, a Dungiven supporter, came into the changing room. Geoffrey is a big brute of a man who isn’t afraid of anybody, and he had been drinking.

“Boys” he said. “There’s something that has to be said and I’m just going to say it. Brolly, you are making a show of yourself. You are making a show of the team and of the town. You think you are better than the rest of us. Stop being an asshole. That’s all I have to say boys. Good luck today” And with that, he departed. You could hear a pin drop. Our manager Eugene Kelly, a good friend of mine since childhood, said “The man is only giving his honest opinion.”

I went into the toilet and sat there for five minutes. Then, out on the field. To my surprise, it was a huge weight off my shoulders. We destroyed all comers in Derry, winning the championship emphatically. Then drove through Ulster, beating Peter Canavan and his lot in the Ulster club final. Along the way I won another doorstop (Ulster club player of the year). It took a drunk supporter to transform our culture from political to high performance.

At the top end, where there is only a point or two between the teams, it is the small things that make the difference.

For a decade, after Gilroy had tackled the political culture head on, the Dubs had a ruthless high-performance culture. This appears to be loosening. Dessie Farrell dropping James McCarthy as captain for his club mate Johnny Cooper – whose best days are behind him – looks like a political decision, not a high performance one. The message to the group could easily be interpreted as ‘I wanted my own club man to lift Sam Maguire.’ Firstly, my own club man. Secondly, we are going to win Sam and I’m doing this for nostalgic reasons for a guy I like.

I would be surprised if this has not created cliques. Ballymun v Na Fianna. Dessie loyalists v independents. There may be many reasons for Dublin’s woeful showing in the second half and throughout extra time in the semi-final, but this is surely one of them.

Applying a high-performance yardstick to some players and not others is self destructive. Some players in Mayo e.g., Padraig O’Hora, or Ryan O’Donoghue, have had to fight beyond the normal limits to gain a place. Others have been automatic choices regardless of performance.

In Kerry, Peter Keane has allowed a political culture to take hold by picking players he thought the team and influential past players would like. He has for example carried David Moran, even though he is well past his best. He has also carried Tommy Walsh.

We saw this in Tyrone post 2010, where their culture changed from good to bad. Mickey seemed to have his favourites. The group wasn’t right. Players who were obviously good enough were sitting on the bench or not there at all. Under Dooher and Logan, Tyrone pick on merit alone.

The contrasts between the semi-final performances of the finalists are instructive. Dublin went through the motions and were five points up with ten minutes to go. But with Mayo pushing up on them, they tried to run out the clock, holding the ball endlessly. Mayo got into the underdog groove, a magnificent, euphoric emotion that sometimes takes hold in a team. When it does, they can do nothing wrong.

Yet, it still took a freakish sequence in the 77th minute to prevent them from losing by a point. Davy Byrne soloed over his own end line, which must be a one in a million chance. Then, the 45 was missed before being retaken. Logically, Mayo should have lost by a point. Another nerve-wracking, heroic defeat. Instead, they won. It was electrifying. I jumped and cheered and punched the air in delight.

But extraordinary euphoric patches of play are not repeatable. They cannot be rehearsed. They are not a game plan. We saw this in 2006 and 2012, when surprise, euphoric semi-final victories by Mayo were followed by heavy final defeats.

Tyrone meanwhile never looked like losing against Kerry, even with 14 men for 20 minutes. Ruthless, ravenous, and methodical, only miracle work from David Clifford kept Kerry in it. And when Kerry pushed up on Tyrone in the first period of extra time, Tyrone went straight over the press and scored 1-2 to kill the game.

I thought it would take Dooher and Logan a full season to transform the group, restoring a high-performance culture and taking them back to Tyrone 2003, all adventure and courage and swarm tackling and fuck the lot of you. I told Logan so a few months ago. But the 90 minutes against Kerry appears to have done the trick.

When Mayo beat the Dubs, it was as though the final itself had been won. On RTE the following evening, they rolled out a melodramatic tribute to Mayo, all stirring music and sentimental images. After Tyrone screwed Kerry over and got on the bus home, the big question on RTE was ‘How did Kerry lose?’

Everyone loves Mayo and its people. What’s not to love? But winning at this level is an entirely unsentimental business. Tyrone are Milwall. No one likes them and they don’t care. As my late father used to say, “Tyrone’s football teams are hateful. But their people are the best people in Ireland.” Having thought about this for a fortnight, here is my final view on it: Ideally, Tyrone need more time to perfect their chemistry, particularly in attack. But they are absolutely united as a group. Alongside Mayo, they are the two of the three best conditioned teams in Ireland (Dublin make up the trio). But their culture is better than Mayo’s, at Board level, management level, and within the group. Hickey always says the best culture wins. Tyrone to win.