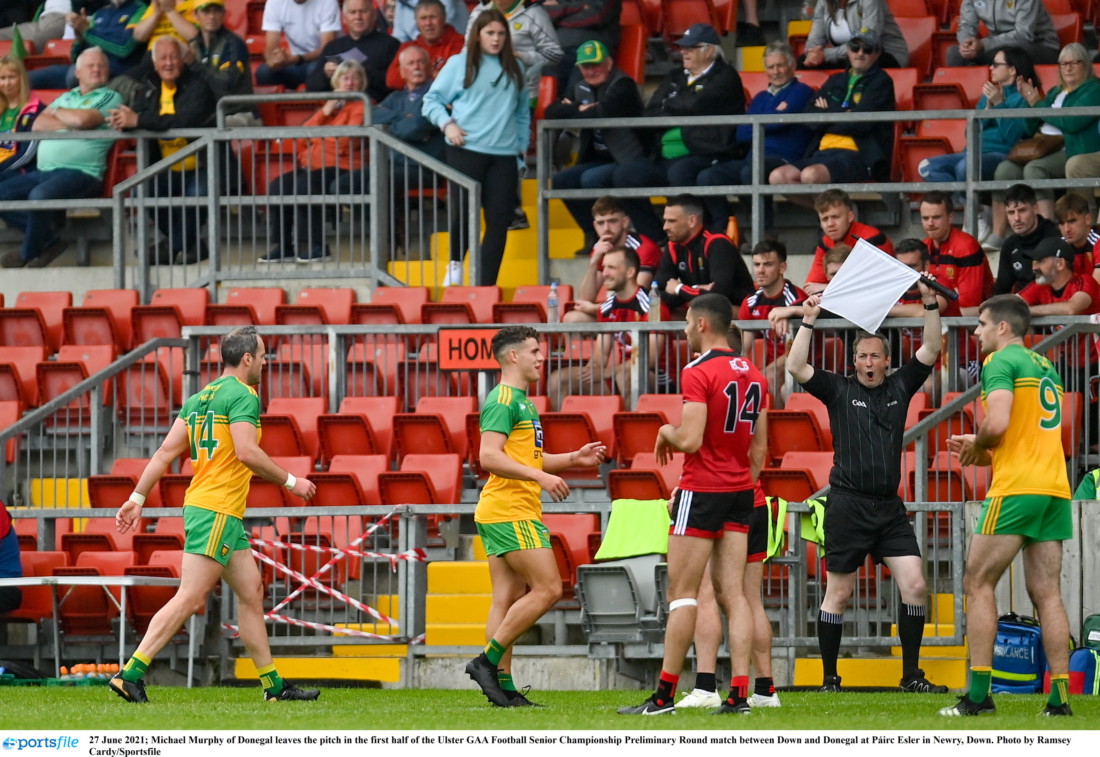 RISK...Michael Murphy had to go off injured during the first-half of Donegal’s Ulster Championship preliminary round victory over Down

WITH championship resuming at the weekend, the RTE half time competitions have returned. First up, the Donegal Down game.

C. May old acquaintance be forgotten

Texts cost €3. No dogs, no Travellers, no northerners.’

Next up, Clare v Waterford in the hurling championship. Half time competition

‘Q. Which hurling county is nicknamed ‘The Cats’?

As for the Donegal Down game, Donegal have perfected the art of going backwards and sideways so it is all going to end in anti-climax. The decision to start Michael Murphy with a dodgy hamstring was the worst sporting gaffe since Michelle Smith handed the drugs testers a vial of whiskey as a urine sample. Michael is injured now and there must be serious question marks over management.

It was utterly pointless to risk him in this game. Down no longer play Gaelic football. Instead, they solo run and handpass and run about at speed not doing very much.

The Chief Statistics officer from the Guinness Book of Records was in the stand at Newry on Sunday as they won their way into the record books, breaking their own previous record of soloing and handpassing by almost 15%. I counted one kick pass by a Down player in the entire game. They did not do anything unexpected. They did not trust themselves. They did not play with adventure. They did not try to win the game.

Instead, they are trapped in a game plan that is doomed to failure, soloing and handpassing to dull, depressing nothingness. They are the Albert Camus of Gaelic football. Life is meaningless. Football is meaningless. Turn up, labour through a pointless 70 minutes. Go home. Lie awake, staring at the ceiling, contemplating the absurdity of human existence. Man’s desire for significance crushed by the coldness of the universe.

At full time, another RTE competition.

Q. Which county completed a six in a row of senior football All-Irelands in 2020?

B. Fish and chips

This weekend, the big game is Dublin v Wexford. The bookies handicap on that one is Dublin +24.

Championship weekends used to be such fun. Now, all we have are memories. And quizzes we can’t even enter.