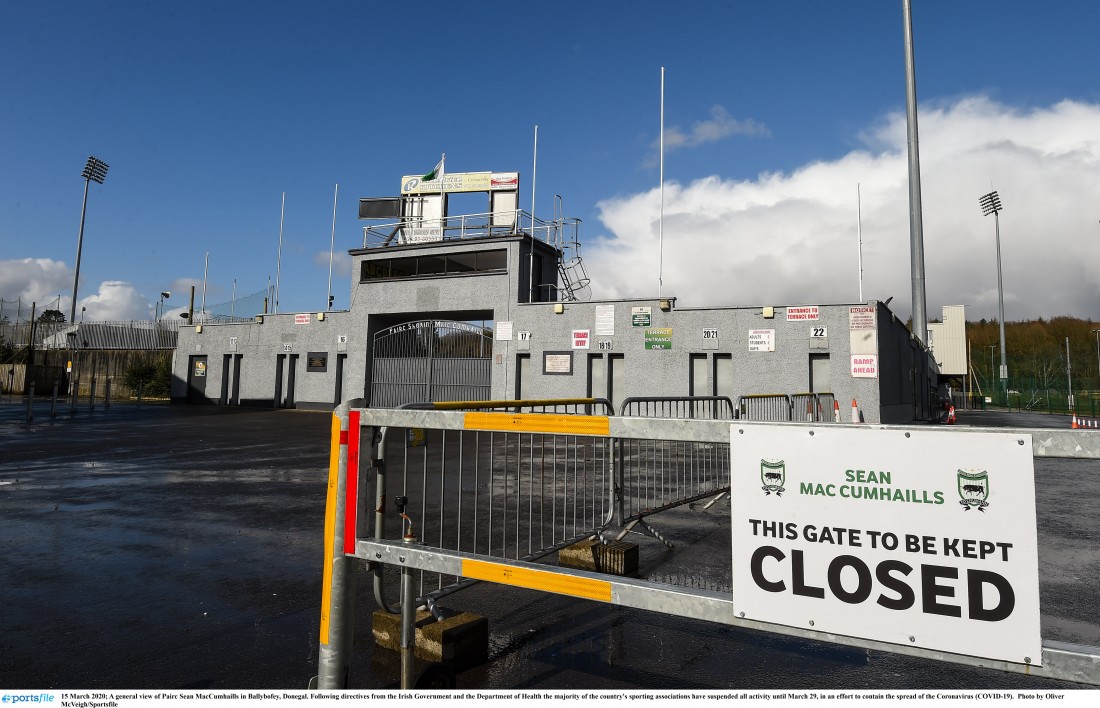 SO, where now? Following the GAA’s decision to call a halt to all club activity, it leaves a number of counties in no man’s land.

In total there are nine county championships that still have to be completed so the big question now is how and when will they be finished?

The county final here in Donegal has already been postponed twice so now that it has been put off for the third time. Naturally people are just becoming fed up with it. I said here a number of weeks ago that this competition should have been completed by now but due to county team’s preparations bulldozing their way through everyone, this is now where we find ourselves.

What’s done is done at this stage and now it’s all about trying to see if the game can be played at all this year. I’m sure there will be a lot of unhappy and disgruntled people in both camps this week as they now try and hold their season together.

Today I’d like to look at how that might look for those on the inside. Yes supporters and club members will be disappointed that the game can’t go ahead, but the real victims here are the players.

Ask any player, you always have your whole season mapped out in your head and the aim is to get to the final and win it. Sometimes you factor in replays but more often than not it’s just about the final.

All year you are gearing yourself towards that. Every wedding you miss, every night out you don’t go on, every time you get physically sick at training, every time you refuse to order what you would actually love to eat, this can all be justified in your mind as you have an end goal in sight.

Now that this has been taken away again, where does that leave the Kilcar and Naomh Conaill players this week?

They have been told that perhaps the game might be allowed to be played during the inter-county window. So in other words, when Donegal are finished.

How do you prepare for that? Do you keep training all the way through? Do you give your players a few weeks off? What type of training do you do? How do you keep your players motivated? Will this have an effect on your team for next year if this gets dragged on for another few weeks or months?

These are all things that both sets of management teams will have to sit down and consider this week as they map their training out for the next number of weeks.

I’m sure at this stage the players just want to get the game played regardless of where it’s played or the fact that it could well only be themselves there. At least it would be played and a line drawn under it as the longer it goes on like this the less appealing it will become to them.

Obviously we knew when we started this that playing our games with this virus still around would prove difficult and now that we are in the middle of a second wave the timing for the start of the inter-county season couldn’t come at a worse time.

Like all of the teams still to play out their club championships, county players find themselves in the same uncertain position. At this point in time it’s hard to see how the inter-county season will be played from start to finish without it being disrupted by further lockdowns or, indeed, cases within squads so how exactly will that be dealt with if it should happen?

I worry that if the inter-county season is paused mid-competition like the club finals have been now, then the whole thing might fall apart. We are already playing into November and December as it stands and that will provide its own challenges never mind if it has to be put on hold and restarted in the New Year.

This is bound to have an impact on where players’ minds are this season. We saw a number of Dublin players calling it a day this year even though the actual season is a shorter one and you would have to wonder if this season actually means as much to the players.

There are a lot of questions that need to be answered over the next few weeks. We keep hearing about the ‘new norm.’ Well I just hope to God that this kind of uncertainty and disruption doesn’t become the norm within our Association. If it does then we are in real trouble.

It would be great to get all of those finals played and to be able to get a full blown non-interrupted inter-county season underway. I am hopeful but then again I have been told on many the occasion that I am an eternal optimist. Sometimes I am proven right so here’s hoping!

Down-Derry derby clash has a big prize at stake