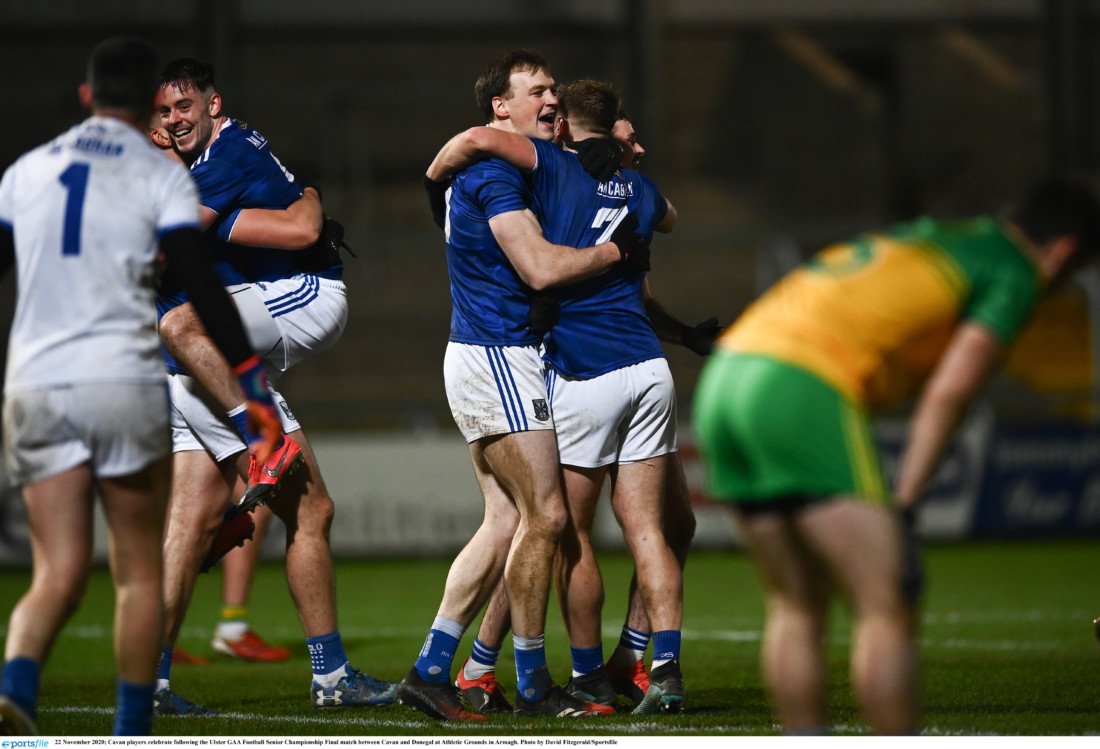 THE 2020 All-Ireland Championship is the one that just keeps on giving.

At the very start of this winter championship I did stress that we would see some crazy results but I don’t think that even in our wildest dreams that any of us could have imagined or indeed predicted the four provincial winners this year.

Dublin and Mayo would obviously be up there in their respective provinces but to suggest that both Tipperary and Cavan could win theirs would be ludicrous. When I sat back and looked at the championship and considered the sort of mindset players would be in, I just felt that shocks and upsets would be plentiful.

It’s one thing playing a Munster or an Ulster Championship clash in the middle of July with the  stadium jam-packed and the sun shining high, but it’s a totally different animal playing in the wind and the rain with very little else to motivate you except for the game.

Tipperary and Cavan deserve tremendous credit because they obviously identified the opportunity that presented itself as teams like Cork, Kerry, Donegal and Tyrone perhaps wouldn’t be at the level that they would normally be at mid-summer. Therefore teams like Tipperary and Cavan could perhaps match them using their hunger and desire and help level the playing field.

Before last week‘s games I did predict that Tipp would win but I didn’t give Cavan a snowball’s chance in hell. This wasn’t out of disrespect but it was more based on the evidence I had witnessed to date.

In Munster I felt that even though they beat Kerry, Cork didn’t show me enough to suggest that they could back that performance up. The win over Kerry, for me, was more down to how Kerry didn’t play, as opposed to how Cork did play and when I thought about the talent that Tipp had, coupled with the thought that this may be the best chance of landing that Munster title, I just saw a Tipperary win.

Compare that to the Ulster final and I had Cavan totally and utterly written off.

This wasn’t down to a lack of respect for Cavan, it was purely based on the football I saw them play to date. We can all sit here today and say ‘ah yeah, I knew that Cavan had it in them’ but that’s total and utter nonsense.

If we take the performances against Monaghan, Antrim and Down, if you’re honest with yourself you would have said that those three performances would barely win a Division Three play-off game.

Against Monaghan they were dead and buried and only for Monaghan retreating into their shell they would have lost. They struggled badly against a poor Antrim side and against Down it was the worst first-half performance I have seen in very long time.

So when you look at those three games, how on earth could you suggest that they had enough to put it up to Donegal given Donegal’s performance to date? Fast-forward to final day and Mickey Graham and his players completely turned that on its head.

Cavan were the team that showed composure, guile and desire and they made Donegal look like a team with no plan. Great credit must go to Mickey has backroom team and his players for producing a performance like that.

After the game naturally a lot was being made of the fact that Donegal were so hyped up and everyone was speaking about the possible match-up with Dublin that possibly they could have taken their eye off the ball, but I don’t think this was the case.

In today’s game a lot of time and energy goes into psychology and the mindset so I’m sure that Declan Bonner would have had the feet firmly on the ground and focused on the task ahead.

Obviously for the Donegal players watching those three Cavan games, it may have been difficult for them to believe that Cavan had that sort of performance in them so that may have played a factor in the first 10 or 15 minutes.

A lot of our younger players failed to make an impact on the game and with each passing moment Cavan grew in strength and stature. They won all the 50-50 balls and turned Donegal over time and time again.

They had some colossal performances from the likes of Thomas Galligan and, as they say, the rest is history.

Massive congratulations to the management team, players and backroom staff and also to all the Cavan supporters who kept the faith during the dark days when most of us lost it a long time ago for them.

Their reward is without doubt the Ulster title and now they are in complete bonus territory as they head into the clash with Dublin.

A lot has been said and written this week and indeed Cavan have asked for the game to be moved out of Croke Park but I feel that’s a step in the wrong direction.

For me that is showing  a weakness from the off as if you are a member of the Cavan panel and you are listening to all this then deep down in your psyche you are thinking they don’t really believe we are good enough to go up there and beat Dublin.

If I was in that Cavan camp my take on the situation would be that we have just won Ulster and our reward for doing so is to step onto the holy ground of Croke Park and pit ourselves against the best team in the history of the GAA. If that doesn’t get you going then perhaps you should be playing chess or something like that.

Semi-finals are traditionally played in Croke Park so looking for an out now and asking for the game to be moved elsewhere shows a chink in your armour. So stand tall, eye up the challenge and meet it head on as there are plenty of other counties who would love to be in your position right now.