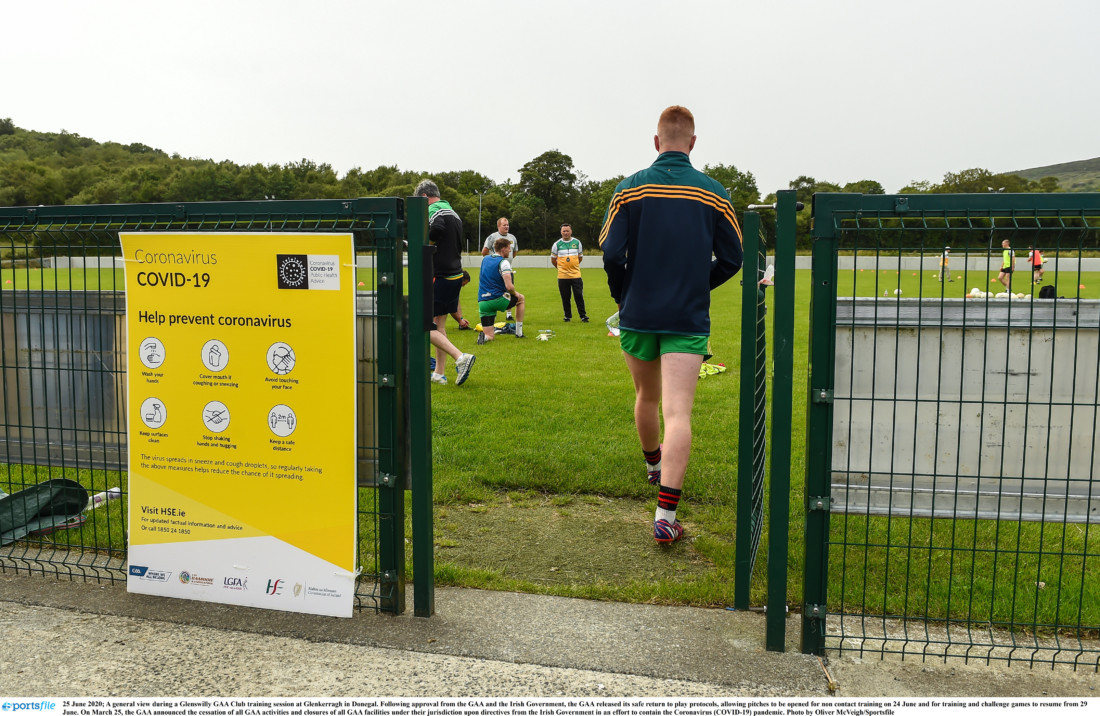 25 June 2020; A general view during a Glenswilly GAA Club training session at Glenkerragh in Donegal. Following approval from the GAA and the Irish Government, the GAA released its safe return to play protocols, allowing pitches to be opened for non contact training on 24 June and for training and challenge games to resume from 29 June. On March 25, the GAA announced the cessation of all GAA activities and closures of all GAA facilities under their jurisdiction upon directives from the Irish Government in an effort to contain the Coronavirus (COVID-19) pandemic. Photo by Oliver McVeigh/Sportsfile

AS fixtures are confirmed, and major dates are in sight, all effort and energy will now go into making sure that teams have the best possible version of their players on the pitch.

For managers and players alike, this can be a bit of a nightmare. We understand that collective training has been a no-go for a long number of months now and although teams had been doing their work in small pods, it’s impossible to replicate the cut and thrust of a full squad session.

This applies to both county and club football, but given the quicker turnaround of county football with fixtures starting in two weeks’ time, this is a critical juncture for county players and management.

You can do all the strength and conditioning programmes, gym work and running you like, but nothing can prepare you for match-type situations.

During matches, with the intensity ramped up by 30 or 40 percent, the body will come under even more stress as it has to react to situations within a split-second. We hope that we will have learned a lot from the last lockdown in terms of how players come back into training, but it goes without saying that injuries will come.

For county managers, most of their planning will be based around how much they actually push the players over the next few weeks. With National League games coming up in two weeks’ time and then straight into knock-out championship format, the last thing you want is to lose one of your key men with a hamstring strain for two or three weeks.

In reality, that could be a season-ending injury giving the tight nature of the schedule.

We can look at all the signs and stats and figures, but what it all really boils down to is the individual player’s body type. Nowadays all teams are doing pre-hab and rehab and conditioning so, in theory, no player should break down but unfortunately for the sports science guys this is out of their control.

We all know players within teams that we have played on who would return to pre-season and year-on-year be guaranteed to pick up a slight strain here and there. The difference there is that in the past you would have a full seven or eight months to get the body adjusted and to be ready for championship but this situation is totally different.

Take one of those injury-prone players. If they pick up a slight strain which normally rules them out for three or four weeks, then they are going to find it extremely difficult to be at their best come championship football because it is just around the corner.

We are where we are so there’s no point complaining about it. All we can do as players and managers is try to manage it as best we can.

Club teams have a slight advantage in that once they are given the go-ahead to return to training they will have that two or three-month bedding-in period before the serious action of championship football swings around.

I’ve read quite a few articles this week on injury prevention and the lessons we learned last year coming back from lockdown and they all point to one key thing – patience.

The worst thing you can do as a manager is to go back on the pitch and try and make up for lost time by pushing your players too hard. You nearly have to take the opposite approach and break the guys in gently.

Gone are the days when managers turn up to a training session, whistle in hand, with the intent to punish players and an ‘I’ll show them’ type attitude.

Things are way more scientific now and we have to listen to the bodies and experts and try to find the middle ground.

Of course you can arrive at training and run the balls off your players and pat yourself on the back after the session, but ask yourself this question – would you rather have your marquee player ready fresh and bouncing come championship time or would you rather have him standing on the sidelines beside you because you wanted to make up for lost time?

Common sense is the key here especially for club managers and underage managers.

It will be extremely important over the next few weeks that players are trained in a sensible manner and hopefully we all get to our end goal, which is to ensure that we hit the pitch on championship Sunday with the best version of our players that we can.