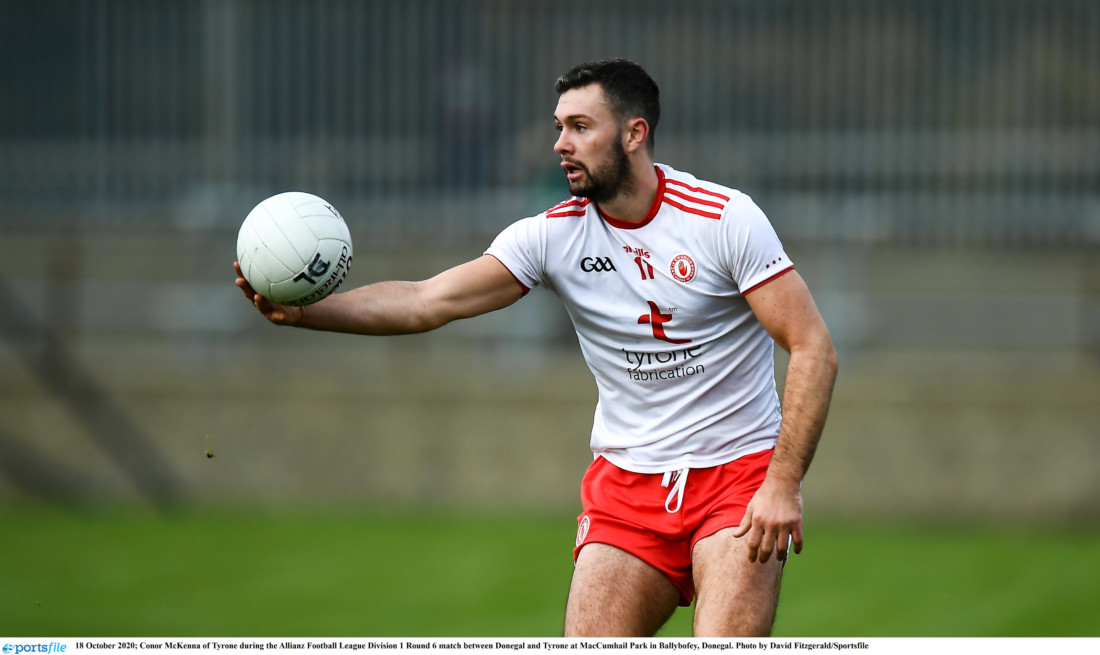 18 October 2020; Conor McKenna of Tyrone during the Allianz Football League Division 1 Round 6 match between Donegal and Tyrone at MacCumhail Park in Ballybofey, Donegal. Photo by David Fitzgerald/Sportsfile

ALTHOUGH we are extremely happy, it is with a small bit of envy that we look on this week as our fellow Gaels across the border return to the playing fields. Watching the videos and pictures coming through on Twitter brought a smile to my face and a hint of positivity, as I know that  before long we will be back doing the same thing down here.

It’s amazing what a little bit of structured physical activity can do for the mind. To see those children’s faces as they sprinted onto the field with their ball and hurleys in their hands would lift any man’s heart.

I think the penny is starting to drop on both sides of the border that outdoor activity is a must if you are to continue to apply pressure on society to stick to the rules that you set. To get fully out of the woods and back to full normality, it is obviously going to take some time, so giving us back a slice of our freedom for our children, and indeed adults, will no doubt strengthen the will to keep this fight going.

It’s amazing how quickly things can turn. If we rewind four or five weeks ago the situation was bleak, the future was uncertain but now that teams are back on the pitch and with county teams returning next week and fixtures already set in place for the league, it just gives everybody a huge lift.

I was talking to a friend of mine recently who is from a club in Derry and he was buzzing with excitement at the thought of returning to the pitch. He reckoned “there will be more people down watching training on the first night then you would normally get at a championship match” such was the excitement of returning to action.

These sort of outings to watch training and hopefully to watch games in the coming weeks will work wonders for the body and mind and will ease the blow that a huge part of society is still off-limits.

We spoke last week about the breach of training regulations with Dublin and then it emerged that Monaghan were apprehended for the same thing.

This time there was less of a fuss made about it because I think deep down even though they’re not allowed to train, we all really want to see those teams back on the pitch because it means that we are a step closer to reclaiming our own freedom.

County teams will be allowed to train together from next week and although most if not all of them would have been training together in some capacity, this will come as a massive boost for management teams throughout the country.

To manage any county team requires a monumental amount of effort and time, so the fact that they won’t have to look over their shoulder anymore in case they get caught training will be a huge burden lifted.

It’s amazing how the body and mind can become accustomed to a certain way of living. As I write this I’m trying to remember the last time I penned an article where we discussed a game that had taken place or a game that was due to take place.

Over the last number of month my articles – and every other GAA related article – was either reminiscing about the past or looking forward to the future.

The return to training and games will also come as a massive boost to GAA journalists and pundits all over the country because we will no longer have to delve into the memory box or pick anymore best 15s. We will finally have some on-field action and developments to discuss.

When we cast our minds forward to the upcoming fixtures we have some real humdingers to look forward to.

When you look at Division One North, every single game will be keenly contested and when you add in the local rivalry it should make for an interesting few weeks.

From next week on once the provincial draws are made, full focus will swing towards the Ulster Championship.

We all know it will be a straight knockout format this year, so if you’re beat your season is over.

I personally think that this will be massive, especially in Ulster this year, and the games will have that real bite to them that perhaps was missing as teams deep down knew that if they were beaten at least they had one more shot.

Last year, like most, I watched a lot of club football from a lot of different counties as a lot of it was available on live TV or to stream, and also due to my work with TG4.

I attended a lot of the Tyrone Senior Championship in person and given the nature of the straight knockout championships in the Red Hand county, it was miles ahead of the rest in terms of excitement. This is what we have to look forward to now with the intercounty season and I for one can’t wait until it swings into action.

With each passing day we hope down here that there will be some sort of announcement made that will allow us to return to our pitches just like your fellow Gaels across the border.

We know for sure that we are on the right track and we can see the light at the end of the tunnel. We hope that it won’t be too long before we are allowed to walk to that light.