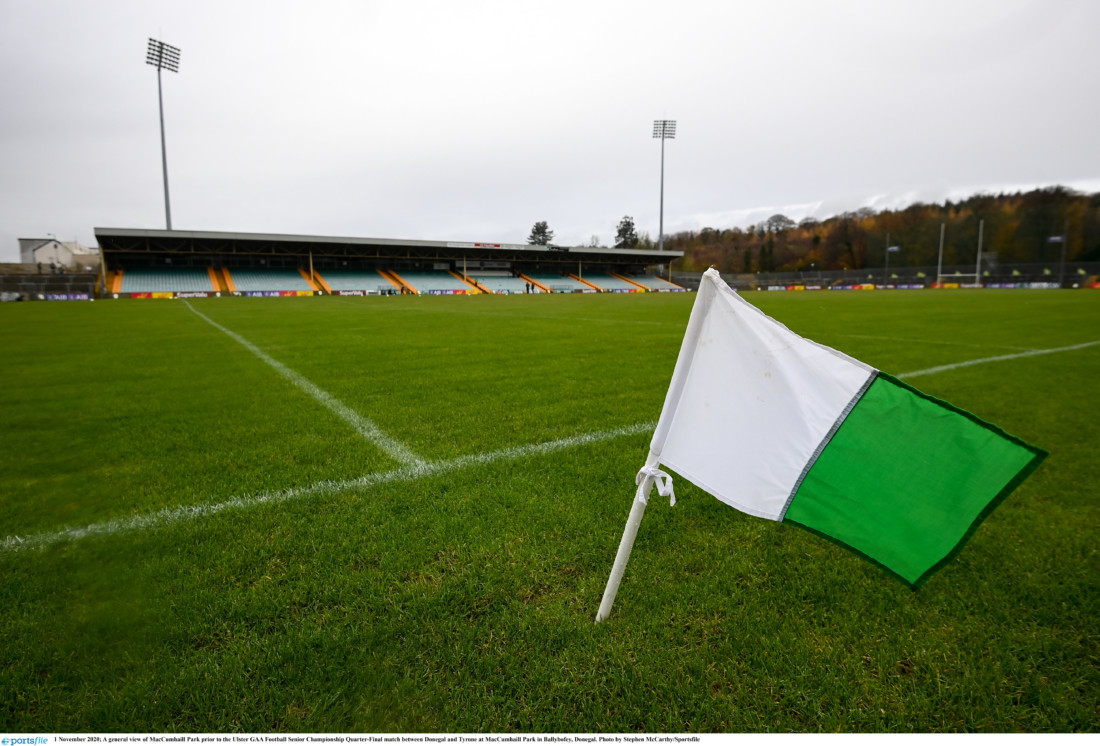 1 November 2020; A general view of MacCumhaill Park prior to the Ulster GAA Football Senior Championship Quarter-Final match between Donegal and Tyrone at MacCumhaill Park in Ballybofey, Donegal. Photo by Stephen McCarthy/Sportsfile

WE wait with baited breath this week as the GAA looks closely at the options available to them in relation to possible start dates for a return to action.

Word is filtering out that the All-Ireland finals are set to be moved back into August as uncertainty about the start date for this year’s intercounty programme lingers on. As a result, the All-Ireland Club semi-finals and finals will now also likely be pushed back into the first part of 2022.

With the number of cases we have and the difficulties that we face, it is highly unlikely that the upcoming National Leagues will start anytime soon and it could be March at the very earliest. That’s what will cause the knock-on effect of pushing the All-Ireland finals back.

If we get away at that and we can get started in March then the GAA can still play off their inter-county season without having to alter the formats of their competitions and, indeed, there will not be too much of an impact on the club scene.

At the minute it’s all ifs and buts, and no matter what the GAA decide upon at their meeting tomorrow, nothing will be set in stone because we all know how quickly things can turn with this virus.

Although no decision has been made and indeed they might leave it another week or two before committing to dates, it’s hard to see how the league can start as planned given the training the county players have missed up to this point.

All players will be following individual running programs etc, but you would have to think that they will be given at least two to three weeks of collective training before being asked to play any sort of meaningful games.

Although intercounty football and hurling is permitted under Level 5 restrictions, the GAA took the decision themselves to ban all activity until case numbers come down and they have to be commended for that. It’s hard to see them taking any actions that may impact on numbers now that we have them going back down again.

I am of the opinion that the GAA should consider scrapping this year’s National League competitions at it stands today. This lockdown has been tough on us all and we crave that outlet that our games give us, but at this point in time the correct thing to do is batten down the hatches and ride this thing out.

Although numbers are on the way back down again I think we are in a totally different place than say pre-Christmas when our games were in full swing.

Numbers are falling but unfortunately fatalities are on the rise and it would be irresponsible for us as an Association to return to action at this stage.

If the whispers are true, and we get confirmation this weekend that the whole season is pushed back a month with the All-Ireland finals in football now taking place in August and club football starting after that, I don’t think too many people will have an issue with that.

Should we get pushed back any further than that then I think that the GAA should be thinking outside the box in terms of getting the championship played out quicker so that we do not see a situation where club football and hurling is pushed back into November or December.

We must be mindful here when deciding on dates and what is played first. Some clubs may have finished up last June or July if they were knocked out of their championships early so that’s a long time for club players to be sitting idle.

Obviously the GAA and the fixtures committees around the country are in a no man’s land here at the minute but let’s all hope and pray that before long the picture is a little clearer for them and we can get a calendar that is fair to all.

On the flip side, we have all being crying out for shorter seasons and better structure to our championships. Last year gave us the opportunity to try a split-season and I think it went down extremely well so this season we might have to play our provincial championships and All-Ireland series at county level in a shorter timeframe to allow enough time for club action.

We should make the most of this opportunity and try things out. You never know, we might inadvertently stumble across the perfect formula.