IN A recent feature in Gaelic Life that looked at Antrim’s performance against Dublin, the conclusion was drawn that the Saffrons lost for three reasons.

Primary possession, fitness and consistent scoring. Dublin were able to outperform the Saffrons in those three areas and for that reason they were able to win.

If fitness was indeed an issue, then the Saffrons will be glad to have been afforded a fortnight off. A three-week spin of games might have taken its toll, and they will be a little fresher for this weekend’s game against Wexford. It will also help that the game is at Corrigan Park, the scene of their victory over Clare four weeks ago.

Another boost is that fans will be allowed entry to the game as the rules on attendances have been relaxed following the lockdown provisions made by the government that stopped crowds going to games. They should give Antrim a lift as they bid to get a second win in the league, and move closer to earning their safety in the top tier.

One of the areas which may benefit from home advantage is their free-scoring return. Ciaran Clarke seemed to have some trouble with his consistency of scoring against Dublin, but he should feel more comfortable in the surroundings of Corrigan Park. If he makes sure to keep the scoreboard ticking over then Antrim should have a good chance of getting back to winning ways.

As it stands, Antrim are in joint fourth place alongside Clare, but are ahead of them owing to their head-to-head result. Based on their stats, the Antrim team need to up their scoring returns as they have the second worst scoring rate in the division averaging 23 points per game. Wexford’s average is almost 26 points. Defensively Antrim have conceded the second most in three games. Wexford have a very good defensive record and only conceded 67 points in their games, which is two points more than league leaders Kilkenny.

Yet there is plenty to be positive about for Antrim. Wexford beat Clare by a point, while Antrim beat them by two, so the teams ware well matched. Antrim have had some fine performances across the board, from Gerard Walsh in defence, to Niall McKenna and James McNaughton. Indeed most of their players have shown signs of quality at some point in the campaign, and if the break can work its magic, they could bounce back with a win this weekend.

THIS is the game that many of the Down players will have been looking forward to this year. This is their chance to test themselves against one of the best teams in the division.

Offay have swept to the top of the division with three wins from three, and this will be their final major hurdle to capturing the promotion spot in the division. Their final game is against Wicklow who haven’t won a match in three games, and are unlikely to test Offaly. So Down are the only challenge standing in the way between Offaly getting a step closer to promotion back to the top tier where they feel they should be playing.

Offaly had been relegated in 2019, but were unable to get promotion back to Division One last year as Antrim and Kerry beat them to the promotion play-off.

This time around, they don’t want to make any mistake. Their scoring returns have been impressive. They had 12 scorers against Meath in round one, 10 against Offaly in round two and eight against Carlow in round three.

That is a possibility as they have the second best scoring return in Division 2A, averaging almost 28 points per game. Paul Sheehan remains their most reliable scorer, and has scored 24 frees in four games, as well as three 65s.

Eoghan Sands and Oisin McMan have picked up goals, most recently against Wicklow two weeks ago. Goals will be tricky to get though as Offaly have only conceded four majors so far in their three games played.

The game is a mental challenge though. Ronan Sheehan’s team lost to Kerry by 11 points, while Kerry lost to Offaly by 21 points. So on those numbers, one would expect an easy Offaly win.

Down could potentially put on a big showing here. Players like Connor Woods, Daithi Sands, Pearse Og McCrickard and Caolan Taggart are all capable of performing on the big days. If they can settle themselves, and forget about the occasion they could get closer to Offaly than most people would expect. 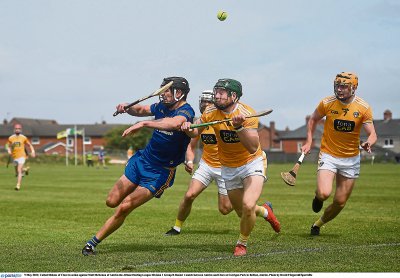 SCORER… Paul Sheehan has been scoring plenty this year for Down