ANTRIM were hit with terrible news this week that Roisin McCormick is unable to play in their Ulster final clash with Down.

McCormick was notified that she was in close contact with someone who has Covid and she has been forced to isolate for 10 days. That means that one of Antrim’s key players, and someone they needed to have a chance of beating Down, will play no part.

It is a huge blow for the Saffrons because McCormick had been in such great form this year. In the Division Two league final in June, McCormick scored 1-3 against Down.

Antrim manager Paul McKillen, who takes the team along with Jim McKernan and Elaine Dowds said: “It is a bad, bad blow. That would be like Down missing Naomh Mallon.

“When I heard I just put the head down. What can you do? That’s the way things are in life. You have to take one day at a time.We will move on. That is what our panel is for. It is hard to replace someone like Roisin. She is having a very good season. She has got herself into very good shape. Unfortunately we are going to miss her for the final.”

McKillen has said in the past that the Antrim camogs are a team that is in transition. They were not expected to reach last year’s Intermediate Camogie Championship final, but they did. This year they have been building on that success. They have a lot of younger, newer players who have provided a strong supporting cast for the more experienced members of the team.

They were utterly dominant in the Ulster semi-final against Derry when they won by 3-10 to 1-9.

McKillen said: “The panel is stronger. It showed in the league final that we had the strength to come back. Down were leading us by six points at half time.

“We came back and we drew level with them. I think we just got caught in the lights and went for it instead of pulling people back again. They got a break away for the goal to win it. We are competing.

“We played really well that day. Up until just before half time when we had two wee mistakes and they got two wee goals. We would have been turning round with the breeze.”

The Antrim and Down rivalry is developing into a fascinating series of late. The two teams met in last year’s Intermediate final and Down won. They met again in the Division Two Camogie League and Antrim won, But Derek Dunne’s Down team had the beating of them in the league decider as McKillen pointed out.

McKillen said: “You have to remember that Down beat Wexford in that league semi-final.

“We are a young and up and coming side. The more we play teams like that the more experience we are going to get and that is where you have to be.”

The two teams know each other well. Though Antrim are going to have a good few changes. McCormick is out of course, as is Chloe Drain who is still sidelined after she broke her jaw in the league match against Derry. Maeve Connolly is out with a small injury.

So that means Antrim will be a little different to what Down have been used to. McKillen expects a similar game as to what has went before.

“It will be an intense, hard, physical match. Down are big strong girls. (Sara Louise) Graffin and (Sorcha) McCartan were the difference in the two teams (in the league final).

“If we play as well as we did the last day I will be more than delighted.

“But Roisin will be a big miss. That could be the difference between winning and losing. But we have added a couple to the panel since the league.”

Katie McAleese is back on the team after taking time away to have a baby last year. Aine McGill from Dunloy has been brought into the team. They are both forwards and they will fill the scoring gaps that are there.

How Antrim deal with the loss of Chloe Drain will be difficult. It means that McKillen and the Antrim management team have to draft a replacement into the full-back line. That will leave a gap somewhere else.

McKillen said: “We are going to miss Chloe, we don’t have someone who can fill full-back.”

Antrim are a young team with players missing, while Down have a lot of experienced and gifted players so it would seem that they should get the win.

Armagh are on course to bounce back from their disappointing defeat to Wexford in the Division three League final.

The Orchard county played Cavan in the semi-final and it was a hard-fought battle.

They were trailing by 0-7 to 0-3 at half time, but they scraped the game back to a single point.

Yet Cavan were the better team for long periods. Thanks to Racheal Merry and Ciara Donnelly they were able to draw the game level at ful- time.

In extra time, Armagh were a different side. Donnelly’s late goal was enough to put the fight out of Cavan and the Orchard progressed.

That battling win should have lifted their spirits and they will feel confident of going in to play Antrim’s II team.

Antrim II’s may be a little weaker due to the travails of their seniors who are missing a number of players due to injury.

For that reason, Armagh should get the win and make up for losing their league final. 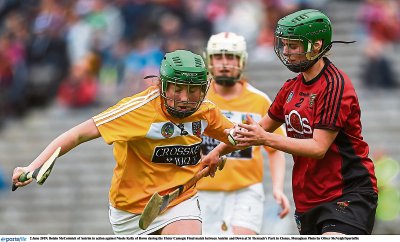