WE look at the top 12 scorers from across Ulster in the Dr McKenna Cup and National Football Leagues in 2022 so far.

TOP of the scoring charts in Ulster so far this year is Fermanagh forward Sean Quigley, who has amassed a seriously impressive total of 5-37 across the McKenna Cup and National League. Hailed as having a ‘touch of genius’ by his manager Kieran Donnelly after a starring contribution of 1-5 in a league clash against Laois, the Roslea sharpshooter is pure quality. Carries a heavy scoring burden for Fermanagh at times, but seems to embrace the pressure.

DONEGAL have had a topsy-turvy year so far, but one man who has been a model of consistency is Paddy McBrearty. Now more than a decade into his senior intercounty career, McBrearty played a pivotal role on the last day as Donegal made sure of their Division One survival with a dramatic victory over Armagh. His last-gasp point against Armagh not only gave Donegal their first win at O’Donnell Park, Letterkenny in seven outings but also nailed down their place in the top flight for another year.

MCKIERNAN missed the opening game of Cavan’s league campaign through suspension but returned to play a pivotal part as they bounced back to Division Three football at the first attempt. The Breffni stalwart has been in red-hot form throughout their league campaign, and while he was relatively quiet in their narrow final victory over Tipperary at the weekend, he still played a part in the build-up to an all-important goal from Patrick Lynch.

TWO goals from Lynch proved decisive as Cavan edged Tipperary to the Division Four title, but he’s been in great form throughout their campaign.

He also hit an important goal as Mickey Graham’s side claimed an important win away to Sligo, and has shown himself to be a safe bet from free-kicks. Lynch also scored four ‘marks’ so far this season, the highest tally on our list.

MCGUIGAN’S reputation as one of the best forwards in Ulster has skyrocketed since Rory Gallagher took the reins at Derry, and it was a massive pity that he was harshly suspended for their final league encounter against Galway. The marquee forward was controversially sent off against Roscommon, but that particular incident of note shouldn’t detract from what was another fine league campaign from the Sleacht Néill dual star. 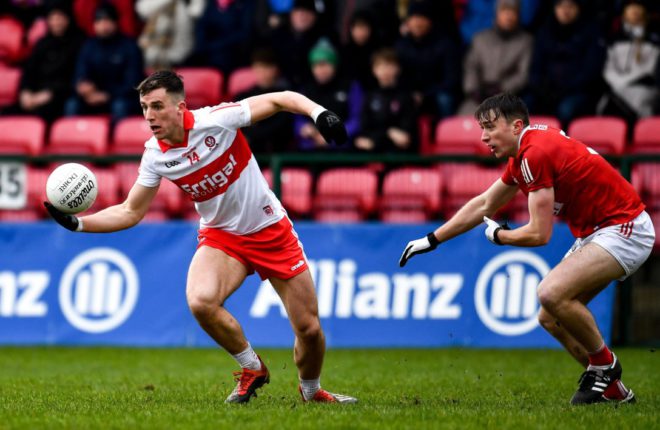 AN elite talent, O’Neill’s sensational performance against Dublin in the first round of the league made him the talk of the country that weekend, hitting a superb goal and a string of great points.

Extremely difficult to mark given his pace and power, he delivered another top notch performance in their second day out against Tyrone at the Athletic Grounds, setting up a goal with a beautifully measured defence-splitting pass.

THE Dazzler has continued where he left off last season. The All-Star winner played an absolutely critical part as Tyrone came good to avoid the ignominy of relegation. Hit a clutch point against Mayo in the penultimate round, and saved his best for last, not only scoring 1-7 against Kerry but knocking in an early contender for goal of the year. Recently described by Joe Brolly as the best player in Ireland. David Clifford would have something to say about that but McCurry is in the form of his life.

SAVED Monaghan’s bacon for the second year running? It’s a fair enough statement as McCarron showed immense character to land a game-winning point against Dublin on the final day of the league to preserve Monaghan’s Division One status. It was a real tour de force all round as he also nailed a memorable goal in the same game. Like Darren McCurry, McCarron is playing the best football of his career so he’ll be hoping for a big championship.

IT’S often argued that Derry have an over-reliance on Shane McGuigan up front, but Niall Loughlin has been in great form and carried to fight to Meath as they signed off their Division Two campaign with a win against the Royals. He hit an impressive 1-4, but it wasn’t an out of the blue performance as he’s been very reliable in front of the posts so far this season.

WHILE most of Grugan’s scores in the early part of the year have come from frees (0-17 to be precise), he’s been a very influential performer from play and recently made his 100th appearance in the Armagh jersey, which is a great achievement by any measure.

IT was a very disappointing league campaign for Down as they suffered relegation to Division Three, but one of the bright spots was the consistent performances of Andrew Gilmore, who has been very impressive in his debut year. Was a great underage player and has carried that potential through to senior level.

THE second Monaghan forward on this list, it says a lot about McManus’ ability that he’s scored heavily in the early part of the season even though he was held in reserve on a number of occasions. Scored a massive point against Tyrone in their first round league game, which ended up a draw, and he wasn’t shy in letting Padraig Hampsey know about it.