LAST weekend Donegal set down a marker with their 6-16 to 2-17 win over Cavan in their Ulster Championship semi-final, and they await the winner of this match.

This weekend Armagh look to build upon their win over Monaghan in the preliminary round. The Orchard county were devastating against the Oriel, and won by 2-18 to 0-10. They led by 1-8 to 0-5 at half time after Alex Clarke had got an early goal.

Blaithin Mackin’s goal in the second half stretched the Armagh further ahead and they weren’t troubled at the end. Aimee Mackin managed to score a total of 0-8 points in what was a great team performance for the Orchard county. Players such as Caroline O’Hanlon, Niamh Marley and Niamh Coleman had very good games.

The Orchard players such as Blaithin Mackin pointed out that the drive to succeed in this year’s championship partly comes from their league campaign, which they said had been frustrating.

They were unable to get promotion from division two, which had been their goal, so they are using the Ulster competition as a means of proving their worth.

Their strength is apparently that they have great balance, as against a solid if not spectacular Monaghan team the Orchard were able to register a high score while at the same time managed to defend well and limit their opponents to just ten points.

Tyrone played Armagh back in May, and lost by 3-11 to 3-10. On that occasion, Tyrone’s Niamh O’Neill and Chloe McCaffrey were the focal point in attack. Defensively, there was good work from Emma Mulgrew, Tori McLaughlin and Megan Kerr.

Kevin McCrystal’s side did not have a great National League campaign; however, this is his first year after taking over from Gerry Moane so he has to be allowed time to get his game plan to settle in particular during the difficult times that the Covid-19 pandemic has brought in.

With more on the line in this weekend’s game the scoreline will perhaps not be as high as it was back in May. The team whose defence clicks, should progress.

The game is a sell out with all 500 tickets getting snapped up on their release. 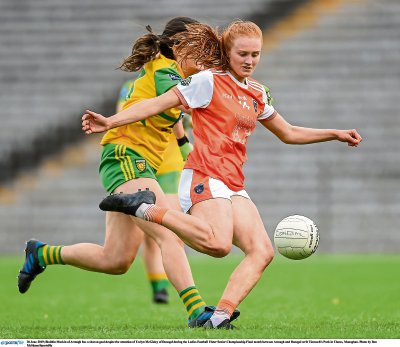 30 June 2019; Blaithin Mackin of Armagh has a shot on goal despite the attention of Evelyn McGinley of Donegal during the Ladies Football Ulster Senior Championship Final match between Armagh and Donegal at St Tiernach’s Park in Clones, Monaghan. Photo by Ben McShaneSportsfile