ARMAGH’S defeat to Tyrone in the first round of the Nickey Rackard was a massive blow to the confidence of the Orchard county. In the lead up to the game, they could look back on their previous three meetings with Tyrone in league and championship and feel positive as all three yielded victories. However, this year, in their Nickey Rackard Group B round one meeting, Tyrone got the better of them.

The result was a surprise to those in Armagh because the Orchard had enjoyed some good form during the National League campaign.

They had won three of their four league matches, and while they had missed out on promotion, they looked like they were playing good hurling.

The problem was they came up against a Tyrone team who were determined to win, and who had been inspired by Mickey McShane, the man who has enjoyed so much success with the Sleacht Néill hurlers.

They were relentless against Armagh and battered them from the start. The Orchard county led by 1-8 to 1-6 at half time, but Tyrone had missed a string of goal chances in the first period so the scoreline perhaps flattered Armagh. When Tyrone were reduced to 14 men for the sending off of Sean Paul McKernan their opponents may have been lifted. They stretched their lead to 1-13 to 1-6 with the wind at their backs. Damian Casey, Lorcan Devlin, Bryan McGurk and Rory Weir made the difference and Tyrone battled to a thrilling win.

What Armagh should learn from the game is that they must put teams away when they have a period of dominance. They were wasteful on occasion, and they also took too long to manage the situation of Lorcan Devlin’s move from defence into attack.

But they are certainly not a bad team. Fionntain Donnelly, Danny Magee and Paddy McBride played very well against Tyrone.

Leitrim should be a straightforward game for Armagh, and a perfect opportunity to bounce back. The Connacht side lost all three of their league games in Division 3B so could be described as the worst team in Ireland. But Armagh will know well that they can’t underestimate anyone.

FOR Ulster hurling fans it should be disappointing to see Fermanagh and Monaghan face off in this game, as it represents the lowest standard of hurling in the province.

Fermanagh’s challenges in hurling are well known. They need more clubs and that work is happening. Monaghan have been working at underage level too to improve their lot. Still, it would be better to see these teams compete at a higher level.

As it is, Fermanagh lost to Cavan in their Group B game, which could be taken as a positive for Ulster hurling as the Breffni county look to be on the rise.

Monaghan arrived at this quarter-final after losing to Louth in their Group B match. Stephen Lambe and Fergal Rafter were key men in the attack, but they were unable to outscore Paul McCormack’s Louth team. The only way is up for either team, but the scoring threat that Monaghan have should see them through. 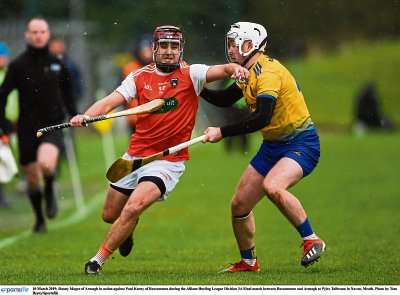