NOW that the dust has settled on the Ulster Senior Football Championship, Michael McMullan looks back and picks his All-Star selection.

Please note, selections are not based on Tailteann Cup for All-Ireland Qualifiers.

Shaun Patton (Donegal)
He could do very little about Niall Loughlin’s goal in the final after making saves against Armagh and Cavan. Getting a fingertip to James Smith’s shot was a major turning point in their win over the Breffni side. His kick-outs were varied and any time he went long, the ball dropped in the players’ lap.

Chrissy McKaigue (Derry)
The Derry skipper conceded just under an average of one point per game in the Championship since Rory Gallagher handed him the role as marker in chief. The Sleacht Néill dual star, kept Tyrone dangerman Darren McCurry from running amok in the first round, with Jack McCarron and Paddy McBrearty also falling victim to McKaigue’s tunnel vision approach.

Brendan Rogers (Derry)
Derry’s defensive machine was named the PwCGPA Player of the Month for May and it’s no wonder. The Oakleafers won their first Ulster title in 24 years, with Rogers to the fore. After keeping Cathal McShane and Gary Mohan under wraps, he put in the performance of a lifeline in the final. He clocked up 16km and managed to kick 0-3 while having to keep an eye on Michael Murphy.

Conor McCluskey (Derry)
Few outside Derry knew of ‘Clucky’ before this season and with a consistent run in the team he has blossomed into a cornerstone. With just seven Championship minutes to his name, he lined up against Kieran McGeary, Jamie Brennan and Kieran Hughes this year, with all three scoreless and replaced. His attacking game was an important part of Derry’s Ulster final win.

Eoghan Bán Gallagher (Donegal)
It was his dynamic running that helped Donegal reach a tenth final in 12 seasons. The Killybegs man got forward to score an early point against Armagh in Ballybofey and he won the two frees that kept Donegal’s head above water against Cavan before going into the full back line to curb the influence of Paddy Lynch.

Gareth McKinless (Derry)
He wasn’t there in Gallagher’s first season, but tore into Tyrone to set the tone for toppling the All-Ireland champions. He was everywhere and when he thumped home the goal against Monaghan, it had Derry rocking and half way to Clones. With Rogers giving the brief of attacking Murphy in the final, he sat tighter to keep Derry’s middle covered.

Paudi McGrogan (Derry)
The reliable defender played every single minute of action in all competitions this year and capped off his 50th senior appearance on Ulster final day with getting his hands on the Anglo Celt Cup. Conor McManus’ point was all he conceded from play in three games. He marked Conor McKenna in the Tyrone game and was the perfect man to thwart the aerial threat of Langan.

Conor Glass (Derry)
Glass changed everything about Derry’s shape. His positional sense; engine and defensive mind-set has allowed Brendan Rogers and Gareth McKinless to bomb forward. His presence has allowed Chrissy McKaigue to mark. If you scratch the surface, his chasing down and ability to cover the ground is immense. It was fitting that his only points of the season was the insurance point against Donegal.

Niall Kearns (Monaghan)
The big Farney man’s duel with Conor Glass was one of the battles of the summer. Both had their moments and Kearns did everything he could to try and pull Monaghan into another final. He was dominant in the air and kicked a fine score. His role against Down in the opening game was more varied as the anchor in the middle. 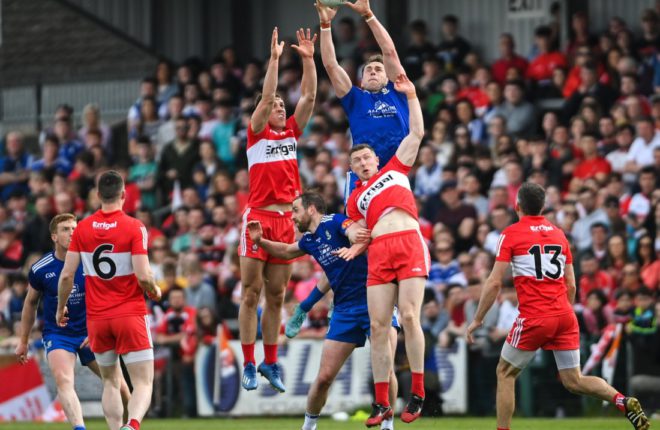 Ethan Doherty (Derry)
Another one of Gallagher’s ever-present group, Derry’s youngest gun has been operating in a more advanced role since the Roscommon league game. He ferried the ball in the opening spell of the win against Tyrone and it was his inch perfect tackle that prevented Micheál Bannigan from lifting the net in the semi-final. When Derry needed an outlet against Donegal, it was Doherty who always showed for the ball.

Rory Grugan (Armagh)
It was a shortened Ulster shift compared with Armagh’s current adventures, but Rory Grugan was their shining light when Donegal handed them a reality check in Ballybofey earlier in the summer. Despite having limited possession, Kieran McGeeney’s men were able to get Grugan into the game. He was their playmaker, assured in possession and landed 0-5 in the Orchard County’s cause.

Peadar Mogan (Donegal)
Declan Bonner may never have handed him a jersey with a number lower than 15, but Mogan was a nailed on starter every week. Everyone in the ground knew he’d start.

Started at full forward for the throw-in of every game, but pulled out into a free role that allowed him to pop up everywhere. Played in the sweeper slot for a while against Gavan and his performance against Derry was the reason the Oakleafers weren’t home and hosed by half time.

Paddy Lynch (Cavan)
A debut year to remember. He lit up Corrigan Park on a day Cavan were wasteful with eight points, including two from play and an advanced mark. He was a constant outlet and Antrim had no answer. He carried his form into the Donegal game and – alongside James Smith – tore Declan Bonner’s defence to pieces until the ball dried up after half time and Brendan McCole was moved across.

Michael Murphy (Donegal)
Donegal just need to clone big Murphy. He’s that important. While him being stationed at centre forward and beyond backfired on Donegal, he was the reason why they were within a whisker of winning Ulster. They would’ve had a harder route out of Ballybofey without him and his presence alone led to Conor O’Donnell’s goal against Cavan. His spinner from 50-odd metres put Donegal ahead when everyone else was playing pass the parcel. One of the greatest ever.

Shane McGuigan (Derry)
Came into the Championship under a cloud of a suspension and a missed penalty in his first game back. When Paul Cassidy was fouled for a penalty against Tyrone, he sent Niall Morgan the wrong way. While he wore number 14 and kicked some vital scores, there was more to his game. He plucked the odd kick-out and ran himself into the ground. Being back on the line to catch Hugh McFadden’s spinning shot summed him up.