KELLY Mallon’s goal, 90 seconds from the end of extra-time, gave Armagh the most dramatic of wins in the final of the TG4 Ulster Ladies SFC against Donegal at St Tiernach’s Park in Clones.

Maxi Curran’s side had seen a four-point lead disappear right at the end of normal time as Armagh somehow forced extra-time. Then with Donegal looking in control once more and Geraldine McLaughlin kicking 1-11, they were holding Armagh at arm’s length before Aimee Mackin found an unmarked Mallon with a peach of a pass and the Armagh skipper cut inside to slam home the winner. It’s an Ulster three-in-a-row for Armagh.

Mackin’s goal right at the end of normal time brought Armagh back from four down to just the one, when she picked up possession following some loose Donegal possession. Mallon’s fifth free then forced extra-time at 2-14 each. 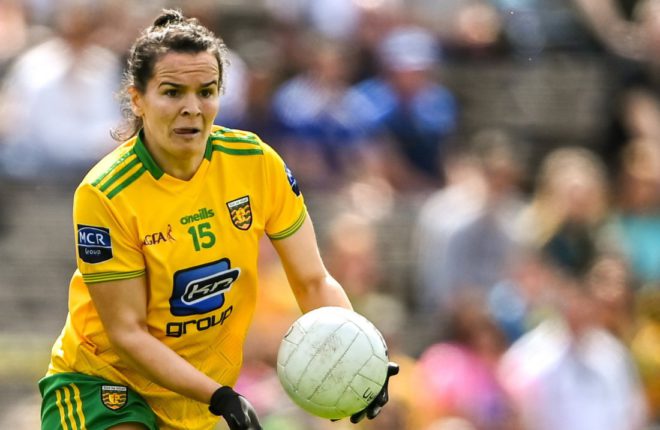 McLaughlin, an All-Star at last in 2021, managed to hook a shot over Anna Carr on 58 seconds when completely surrounded by Armagh players, when she was found by Niamh Hegarty to give Donegal the dream start.

Although far from an ideal start, it didn’t seem to ruffle Armagh, who soon found their groove to post 1-2 without reply by the 11th minute, with the goal coming when Aoife McCoy rammed past Roisin McCafferty when set up by Aimee Mackin’s pinching of possession from Niamh Carr. However, Niamh McLaughlin’s goal for Donegal made it 2-5 to 1-8 at half-time.

Karen Guthrie, the former Donegal skipper, was introduced at the break having missed the semi-final win over Cavan. She immediately began chipping in on the scoreboard, with Donegal looking the most likely with a four-point lead three minutes from time. Armagh, through Mackin and then Mallon’s free, pulled it from the fire to produce extra-time, where there, they did the same thing again.