BREDAGH and Donaghmoyne will have to do battle once more, after the two teams could not be separated as darkness descended upon Pairc Naomh Colmcille, in Sunday’s Ulster Final.

Bredagh may have thought they had it won in the latter stages of the second half with a three-point advantage, but the Monaghan champions pegged them back, before taking a three-point lead of their own late in extra-time, despite being down to thirteen players.

However, Bredagh weren’t finished and Anna McKee’s goal at the death, saw the match finish 3-8 to 0-17.

Despite the many twists and turns of the contest, Bredagh’s Ciara McCreanor says that she and her teammates never lost hope.

“You just have to regroup whenever these situations happen; you can’t really give up – especially when you have that numerical advantage. There wasn’t really a time where I personally ever thought ‘this is gone.’”

Ultimately, both teams will have to ponder over what might have been, but McCreanor concedes that a draw was probably a fair reflection of the battle between two evenly matched sides.

“I’m sure the managers will watch the game scrupulously, but it’s tough in some respects whenever you draw a game, because you start to look at the very small margins and how you could have come out of it with the win.

“But it was a very tough battle, that could have gone either way.”

Without floodlights, darkness began to descend upon the match and a decision had to be made as to whether the teams could see out the contest through extra-time. But even in the midst of uncertainty, Bredagh’s focus never waned.

“Whenever it was decided that it was going to go to extra-time, you can only do what you can do, whenever you’re that focused.

“ To be honest I hadn’t actually noticed how dark it had gotten until we watched back the stream and seen the difference in light from the beginning to the end.

“But when you have the focus
that we had, you just deal with whatever is thrown at you and run with it.”

The focus of this Bredagh team has never been in question. They came into the game in circumstances that could unsettle even the
best of teams, as they travelled around the province in search of facilities to use so they could
prepare for an Ulster final; but McCreanor says that they never let these circumstances affect their mentality.

“It’s not ideal (the travelling), but we take it as it comes, as we’re a very determined bunch.

“In fairness, the likes of Joe McCarville, Jerome Quinn and Gerry [Rodgers] have done so much work in trying to get us pitches.

“Everyone’s responded quite well. Whenever you have one goal in mind, it doesn’t really matter where we train, as long as we’re together.”

One reason for Bredagh’s exceptional responses to adversity, may come from the backing they get from the stands, and McCreanor paid tribute to the support they have received.

“It’s been brilliant to be fair – you only have to look at the Bredagh Instagram page to see all the videos of the young girls.

“After the county finals, given both ourselves and the junior team both won, we brought the trophies down to Cherryvale for the underage training and the excitement was infectious.”

“Even the atmosphere yesterday, that was all down to our underage girls.

“They were just so excited to be there, and it was really uplifting.” 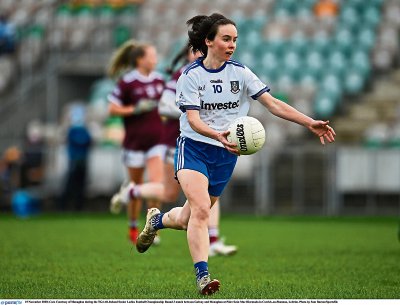 BREDAGH… Eilish Ward played her part as Bredagh battled to draw with Donagmoyne in the Ulster Club Ladies final.