BREDAGH’S training preparations for their first ever Ulster Senior football final have seen the team embark on what the club are calling a ‘tour of Ulster.’ A tour which has seen them train in a variety of locations, including Tullylish, some 40 minutes from home.

As their season has continued into the colder months of the year, Bredagh have relied on the goodwill of fellow clubs across the province. This is because their usual facility, Cherryvale Park, is council owned and closed during the winter, and manager Gerry Rodgers has paid tribute to the teams who have shown the kind of generosity which makes the GAA so special.

“We’ve been on the road these last couple of weeks, and I would like to say thank you to Dundrum GAC, Tullylish GAC, and to Our Lady and St. Patrick’s College Knock, who let us use their facilities because it has been very important to us.”

In other years, Bredagh haven’t had to worry about this issue, as they had never won a game in the Ulster Senior championship, but that changed last time out when they defeated Moneyglass. If that result is anything to go by, Bredagh may find themselves in this same situation again in the coming years ahead.

Despite the significance of gaining their first win at this level, Rodgers said that it was never something they let enter their minds before the semi-final.

“We didn’t make much of it in the build-up to the Moneyglass game, but you could certainly see the elation and relief in the girls’ faces after getting over the line. Even though we didn’t talk about it beforehand, it was definitely a stepping forward moment for these girls into a different level, and hopefully they realise that we can play at this level, and we can compete at this level.”

If that win showed that Bredagh belong at this level, a showdown against 12-time champions Donaghmoyne, will be the biggest acid test possible for Rodgers’ young team.

“We realise that we’re up against very serious opposition, and the one big difference is probably experience. Win or lose on Sunday, it’s just important for us to gain that experience of playing in an Ulster club final.”

“We know we got to put our best foot forward and be at the top of our game, to put up a challenge against Donaghmoyne. But we’ve earned the right to be here, and we’ll certainly not let the game go past us.”

In the year of their 50th anniversary, this Sunday’s Ulster final could be regarded as the biggest game Bredagh’s history, but Rodgers believes his team must treat it like any other game.

“We’re just taking this for what it is – a game of football. But if somebody decides to give us a cup after it’s over, we’ll certainly take it.”

“In all seriousness, we’ve got to just go and play our football, and play the best that we can.”

If it is the case that somebody decides to give Bredagh a cup after the match on Sunday, their ‘tour of Ulster’ will last a little bit longer. 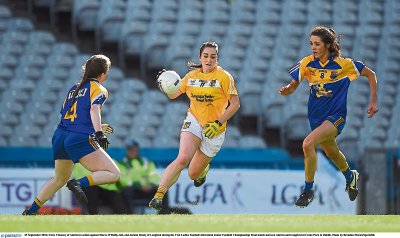