“LAST week, I told the boys that I really believed we were going to win it; there was no doubt in my mind that we had all the tools to do it. Now that we have won it, I can’t believe it!”

That was Clann Éireann manager Tommy Coleman’s assessment of an unforgettable Armagh Senior Football Championship Final, that saw his side win 2-12 to 0-16 over Crossmaglen.

Clann Éireann started the game well, but found themselves behind by 0-3 to 0-1 at the first water break, due to some wayward shooting and a succession of wides, which worried their manager.

He said: “When you’re playing a team of Crossmaglen’s calibre and you’re missing those chances, you think, ‘this could come back to bite us,’ but we stuck in and kept it tight defensively.”

The Lurgan men were able to pull it back to 0-5 apiece at the interval, but Cross came flying out of the gates to start the second-half, pointing six times in a row, to lead 0-11 to 0-5. Clann Éireann were able to pull one back through a Conor Turbitt free, before a badly needed second water break.

With 60 seconds to get his message across to the squad, Coleman agreed that the water break came at the right-time for his team, and he shared what he had to say his players.

“Absolutely it came at the right time for us. I got them in, told them to get their heads up and ‘don’t be panicking, we can still win this.’ We always said that if we were there or there abouts with 15 minutes to go, we were going to win.”

“We abandoned all sweeper systems and threw midfielders up and just went man-for-man and pushed everything up at them. We got a couple of scores, and that was that; you could just see the momentum shift had changed.”

Coleman’s message worked. After pulling the deficit back to just three points, Ruairi McDonald raced through the Crossmaglen defence and smashed the ball into the roof of the net, to bring the sides level once more, at 1-9 to 0-12.

Cross were able to recover however, and they led by two points with little over a minute remaining, but their defence and goalkeeper both failed to deal with a long ball from substitute Jack Conlon, which skipped off of the surface and found its way into the back of the net, off the inside of the post, without being touched on its way through.

The goal had more than a hint of fortune, but on this day, Clann Éireann’s luck was in.

“The first goal was absolutely top class, but with that second goal we had that wee bit of luck, but you’re always going to need that bit of luck to get over the line in the championship, no matter who you are, especially when you haven’t won it for so long.”

Coleman believes that maybe it was always destiny for Clann Éireann to finally reclaim the trophy, which is named after a legend of the club in Gerry Fagan, during 40-year anniversary week of his son’s Peadar’s murder.

“The stars were starting to line-up. Gerry Fagan was a phenomenal member of our club. He was actually captain of both teams: in 1954 and 1963.

“The cup is named after him, and now we’ve got it back.”

“The other thing, of course, was that for his son Peadar, it was the 40-year anniversary of his death this week.

“Everything just seemed to be falling in line for us.”

Despite Clann Éireann having some fortune on their side, the game wasn’t over just yet, and Crossmaglen pulled it level once more through star man, Rian O’Neill, as the teams headed into injury time.

But in football, you earn your luck and Clann Éireann earned their victory through two more points off the boot of Turbitt, who took his tally to 0-8 on the day, and sealed an historic win for their club.

“Turbitt’s contribution was absolutely unreal. You want your county players to step up in the final and come to fore, and he has certainly done that.”

Although Turbitt’s performance has rightly earned him his plaudits, Coleman explained that this was an overall performance, from his excellent side.

“You had TK (Tiarnan Kelly) who was absolutely superb, Shea Heffron was mighty all day, Ryan Henderson was simply outstanding. Turbitt got the scores and certainly that’s where everybody looks when the win comes, but the all-around team performance was absolutely brilliant.”

Clann Éireann’s win, was a win not just for them, but for all of Lurgan, and Coleman thanked all of the supporters who’ve backed them along the way.

“The reality hasn’t set in for us, it’s been that long of a wait for not only the club, but the wider community. The support base we’ve had from the entire Lurgan GAA family and beyond, has been nothing short of immense.”

The championship crown returns to Lurgan for the first time since Clan na Gael lifted it in 1994, and this success will no doubt give a boost to the football scene across the area.

Additionally, Clann Éireann’s win sees them become the fourth different winner of the Senior Championship in the last five years, and the competition in Armagh looks set to be wide open for years to come.

Coleman said: “If Cross had got over the line, which they were very close to doing, people would have been saying, ‘It’s Cross domination again,’ but for me, next year’s senior championship will probably be the widest it’s been since the early 90s.”

Ultimately, however, that is something for Clann Éireann to ponder over at a later date. For now, celebrations of their fantastic achievement will continue for a while yet, before the dust settles, and they look forward to playing in this year’s Ulster Championship. 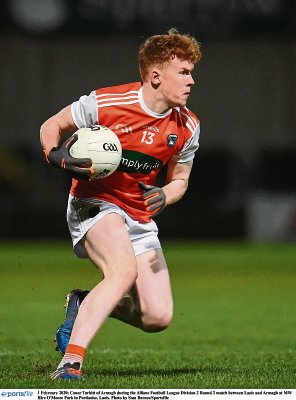