Which opposition ground do you like playing on and why?

Portglenone and Creggan always keep their pitch in good nick.

Which opposition ground do you dread playing on and why?

Aldergrove or Aghagallon – never get an easy game up there.

What team have you enjoyed the most success against and what’s the most memorable win?

Haven’t had enough success yet to say. Hopefully I’ll be able to answer that one better at the end of my career.

Which team have you enjoyed the least success against, and is there one you’d prefer to forget?

Randalstown just beat us in the championship final and beat us in the league which they went on to win too. So I’ll have to say them for this year anyway.

Which opposition player have you enjoyed marking and why?

Darren McCormick from Randalstown, is a good player and always gives you a tough battle.

Which opposition player have you disliked marking and why?

Which player would you transfer into your team and why?

Which team, apart from your own, do you like to see do well and why?

Portglenone, they never stop. I think they’ll get a Senior championship soon, they’ve been knocking on the door for a few years now.

What’s the most frustrating defeat you have experienced?

What’s the most satisfying victory you have experienced?

MacLarnon quarter final vs Castleblayney in 2019. Won by a point in extra time

Which team, apart from your own, do you see doing big things?

Within the county, Creggan. Outside the county I’d say Glen Maghera, they’ve some squad and put up some ridiculous scores in the Derry championship. 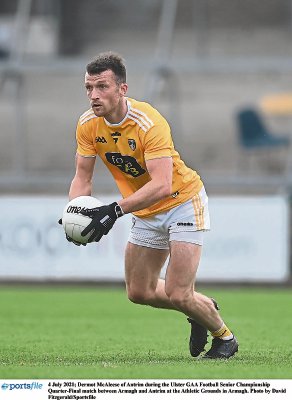