CRAOBH RUA’s recent Armagh Junior Championship win, saw them claim both the league and championship for a second consecutive year, but success hasn’t always come easily. The foundation for this success was built upon the commitment of those who stayed the course, during some difficult years.

One such player is Fiachra Bradley, who is both an experienced member of the squad, and a man who has coached many of the players who are now his teammates.

He said: “We were in the doldrums really for a number of years. In 2013, we won the junior, and went to an Ulster Final, but 2014 couldn’t have been any worse.

We lost a lot of players, and we didn’t have many boys coming through after that to back things up.”

“We had boys playing there for five or six years knowing that we were not really making any inroads, and we were just trying to hold the thing together. We were enjoying the craic and enjoying it for what it is, but winning isn’t something we thought we were going to get near.”

Having been able to keep their heads afloat, Craobh Rua were able to bring in some new blood through the underage system, and the injection of youth gave them the energy they needed to push on.

“We have new young fellas that have come through, and really refreshed the team. Within the group, a lot of the older players worked in bringing them boys through the underage, so we’re close-knit as a club, and as a team.”

“I’m one of the oldest, and I’ve known them younger lads for a long time at this stage, from coaching them at underage. The fact I’m now playing with them, just shows what I’m talking about.”

It was far from an easy path, however, to get the players to stay committed through the underage system, as a lack of local clubs to compete against led to many hours spent on the road.

“The path for a hurler wouldn’t be as straightforward as it is for a footballer around here. You have to go off of the beaten track, but it shows the level of commitment that we have in the club to do that.”

“We were taking them boys up to the Ards, maybe twice a week. You’re talking two hours there of travelling, just to get games.”

The dedication that Bradley and others displayed has led to Craobh Rua being where they are now, and he feels it has all been worth it.

“It shows that it can be done, and it bears fruit. The hurling that we’re playing has improved a lot over the last couple of years, and basically that is the outcome.”

Considering the position they found themselves in only a few years ago, one might think that a county championship title will suffice for Craobh Rua, but Bradley feels his team are capable of going on a run in the Ulster Championship.

“We’ll give it our best, and we’re putting in the effort to put that performance in. We wouldn’t fear anybody that’s put in front of us; personally, I’ve been around junior hurling for a long time and I’m very confident in us matching anybody.”
**********

WHEN speaking to Gaelic Life this week, Craobh Rua’s Fiachra Bradley talked about dual-players, and the importance they can have in a team’s success.

Craobh Rua, who won the Armagh Junior Championship, are exclusively a hurling club, who reside in a football dominated area in South Armagh. Two football clubs local to the area, Belleek and Carrickcruppen, also found success as they claimed Junior and Intermediate titles respectively.

Seven of the players on Rua’s squad, and their manager Paul Cunningham, all have ties to one of the two aforementioned clubs, and Bradley pointed to how dual players having success in football, can carry over to their hurling.

“I was a dual player my whole life, up until three years ago, and I feel as though anytime I was flying in one, I was flying in the other, and I can see them boys are the same. They’re going game-to-game and their game sense is totally in-tune, and we are definitely energised off of that.”

Bradley also noted how Craobh Rua’s team brings together a number of players who are rivals on the football pitch but put that to one side, when hurling.

“We work extremely closely with the other clubs in the local area, and I think that’s just a part of being in the wider community, but at the same time we’re our own entity and that stands to us.”

“The team is made up of quite a few lads from different football clubs, but there’s a bond there. When we come to Craobh Rua, we leave our football clubs at the door. There’s always banter around it, but when we put that jersey on, we are Craobh Rua and that’s it.” 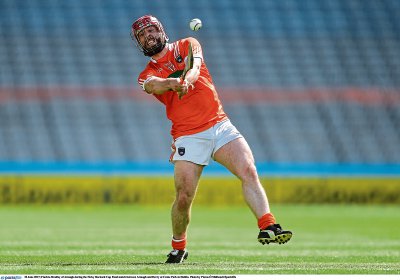