CREGGAN have built a squad to last, but after soaking up the experience of county final day it’s time to start winning titles insists manager Gerard McNulty.

In his second season as manager – after serving the previous two years in Kevin Madden’s management team at the club – McNulty feels the experiences of their previous final defeats has helped the team’s learning curve.

“I think we should’ve won it in normal time last year,” he recalls of their 1-22 to 1-19 extra-time defeat to Cargin. “A couple of wee decisions on the pitch went against us and the guys are another year more experienced.”

McNulty and his brother Thomas were instrumental in the rise of St Enda’s as a force in Antrim football and looking beyond the senior players has paid dividends in Creggan.

“Part of the remit was to bring a lot of the younger players through,” Gerard said of the Kickhams’ senior squad that sits at 37 players. It allows quality in-house game with all the players in their second season of a strength and conditioning programme under Martin McElkennon.

“They are all big lads now and that’s the benefit of what I said to Creggan I would do. A few of them are pushing to be on the squad and some are making their mark on the team.

“They have a few lads coming through that’ll keep their senior team in a good place.”

Looking ahead to Sunday, McNulty recognises the development of Aghagallon. He’s content with how the team preparation is sizing up, but is leaving the rest of the club to embrace county final fever ahead of a novel pairing that will produce a new champion.

“Like Aghagallon, let the people who are involved in it enjoy it, as far the team goes we do our training and get on with it,” McNulty states.”

“It (preparation) is all going as it should be. This is the week where you have everything done and you are just going over things and making sure everything is in place.

“There is good camaraderie in the group. This is our fourth year and a third final. We are used to the occasion, but it won’t be without nerves.”

Last weekend they were in Corrigan Park to suss out the surroundings. Aghagallon had their slot too.

“Now is the time they need to be starting to win one,” McNulty says. “It’s not the end of the world if we don’t (win it this year).

“This would be the pinnacle, to get a senior championship and you saw the celebrations in Glen after beating Slaughtneil and what it meant.”

Sunday’s final whistle will spark a seismic outpouring of emotion. Creggan hope it’s their joy that radiates along the Whiterock Road. 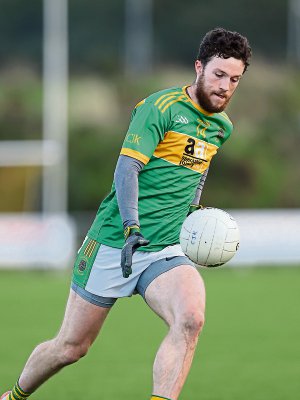