THIS is Donegal’s final league fixture, and victory could, in theory, leave them with the chance of winning the Division 2B title.

They’re joined at the top on points with Kildare (who have two games left to play) and Mayo, so the margins are wafer thin with only the team that finishes in pole position securing the title and a promotion berth.

All Donegal can really do at this stage is get the job done against Derry, and it’s a great achievement that they even have a chance to claim the title given it was only last year that they were playing in Division 3A.

Opponents Derry have the opposite problem; they’re rooted to the bottom of the table with two games left to play, albeit their final game is against fellow strugglers Roscommon.

Cormac Donnelly and Dominic McKinley’s side can take a massive step towards survival this weekend, however. Donegal have been in better form, but you can’t write off a team with the calibre of players like free-scoring Sleacht Néill forward Cormac O’Doherty and Brian Cassidy, who scored 1-7 in their defeat to Kildare nearly a fortnight ago.

These two teams played in the league in 2019, and it was a chastening enough experience for Donegal as they were trounced by 3-18 to 0-12.

Declan Coulter scored eight of their points that day, and he’s been in fine scoring form in this year’s league campaign, but they’ve been by no means reliant on him either as they’ve been strong all over the pitch with the likes of Stephen Gillespie showing well at the back.

While Derry have had a  disappointing start to the league, losing both games, they have the potential to do better, especially with Gerald Bradley and Niall Ferris returning to the fold this season. Maybe they’re taking a bit of time to acclimatise to life under their new management team, but they should improve and it wouldn’t be a shock if they get one over Donegal.

Simply put, it’s a huge game for both teams and could well go either way. An in-form Donegal to edge it.

THIS is a huge opportunity for the Fermanagh hurlers to claim the Division 3B title.

It’s a winner-takes-all tie effectively as the victors will claim the title and therefore also achieve promotion to the ranks of Division 3A.

Louth top the table at present with two wins from two, but Fermanagh are nipping at their heels as they have three points from two games (drawing against Cavan before overcoming Leitrim with a deserved eight-point victory at the weekend).

Once again Sean Corrigan was at his exceptional best as the Erne hurlers got their first victory over the campaign, but it was a fine all-round team performance that sets them in good stead for their all-important clash against the Wee county, who are aiming to bounce straight back up after last year’s relegation.

Other Fermanagh players who performed admirably were Rory Porteous, who was tremendous in the full-back line, while Tom Keenan is going from strength to strength with his lung-bursting runs and general work-rate.

Fermanagh also have redemption on their minds as they lost out to Louth in last year’s Lory Meagher Cup final.

On that occasion, Louth were deserved victors, but it doesn’t seem to have scarred Fermanagh too heavily and it would be a huge boost to hurling in the county if they were to achieve promotion out of the basement tier.

Louth will be favourites by virtue of winning last year’s corresponding championship, but it’s worth noting that they only had a point to spare in both their matches to date – one-point wins over Leitrim and Cavan – so they’re not going as well as they would like. Ultimately, it could come down to whether or not Fermanagh can shackle their talented forward Darren Geoghegan, who is deadly accurate from both frees and play.

UNFORTUNATELY for Cavan, they have little to play for here apart from pride.

It’s their third and final match in Division 3B but they don’t have enough to show for their efforts to leave them standing a chance of finishing in top spot (there are no league finals at this level this year).

They’ve been a little unfortunate as they secured a draw on their first day out against Fermanagh before slipping to a one-point defeat to table-toppers Louth.

The Breffni hurlers performed admirably against the Wee county with their primary free-taker Brian Fitzgerald on form in front of the posts. With just over five minutes remaining, the teams were deadlocked at 2-11 to 0-17, but Louth snatched the victory after both sides traded points in a frantic finish to proceedings. Their final day opponents Leitrim are bidding to avoid the wooden spoon as they have no points to their name after two matches, losing by a point to Louth and falling to an eight-point defeat against an in-form Fermanagh. Cavan would probably view their league campaign as a failure if they don’t manage to get the win this weekend, so that motivation should propel them to victory. 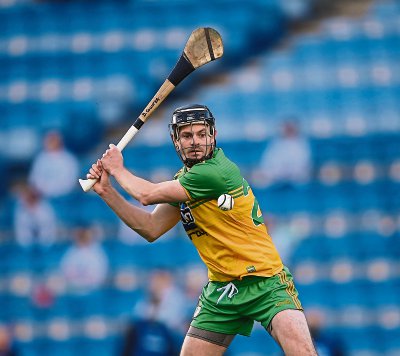 22 November 2020; Declan Coulter of Donegal during the Nickey Rackard Cup Final match between Donegal and Mayo at Croke Park in Dublin. Photo by Piaras Ó MídheachSportsfile

28 November 2020; Liam Molloy of Louth in action against Conor McShea, left, and Caolan Duffy of Fermanagh during the Lory Meagher Cup Final match between Fermanagh and Louth at Croke Park in Dublin. Photo by Ray McManusSportsfile