AFTER pouring everything into a nearly perfect performance to beat All-Ireland champions Tyrone, backing it up against Monaghan raised the same questions across the Oakleaf County in the last two weeks.
Was it a flash in the pan? Could Derry get to the same level against a Monaghan team carrying more hurt than Tyrone? What was the desire meter reading in the Derry camp? Monaghan had more about them than Conor McManus.
Tactically, Rory Gallagher would have Derry at the perfect pitch and they are purring along nicely in the physicality stakes.
While it wasn’t a polished performance, the answer to Derry having the same ravenous hunger again was a resounding yes.
Much has been made of the “kick every ball” nature of Gallagher along the line, but, if anything, I feel it’s what Derry need, someone to inspire.
The Derry boss seems to have the great skill of looking like a ticking time bomb along the line, but having an ice cool thought process. How does it work? I have no idea, but his photographic memory for detail knows no bounds.
For all the good Derry brought to the table, Monaghan didn’t help themselves. After seeing Derry tear Tyrone asunder and allowing Down through their middle for two goals, they didn’t appear to learn the lessons.
It gave Shane McGuigan enough room to root himself in the game – in a more rotated role that saw him pluck a kick-out at one point.
By the time Karl O’Connell came in and, collectively, they were able to get half a paw on Gareth McKinless the game was over.
On the other hand, Paudi McGrogan, Chrissy McKaigue and Brendan Rogers came out on top of their battles, with Conor McCluskey has announced himself as a nailed on starter.
I took one look at the half-time score Tweet I was firing out and I saw no way back for Monaghan. The gap was too big. Derry’s gameplan is reliant on being ahead and seven points was more than significant.
Barring a collapse, Derry would always have enough.
There was chatter about the appointment of David Gough after the one-match ban he imposed on Shane McGuigan in Roscommon and putting selector Ciaran Meenagh outside the Hyde Park fence.
There was his red card to Conor Glass in the Hogan Cup final.
Would Derry get a fair hearing this week? I felt they would. Every day is a new day for a referee.
Dessie Ward should’ve saw black for slinging down McGuigan. Kieran Hughes was very lucky not to pick up a second yellow card. Conor McCluskey got a handy free after he had his goal chance repelled by Beggan. Glass walked a fine ‘black card line’ at a stage in the second half.
These aside, I feel two decisions in the opening moments helped Derry find their feet.
After Gary Mohan won the throw-in, Monaghan kept the ball for 77 seconds before Mícheál Bannigan was harshly enough blown for taking too many steps with Ethan Doherty breathing down his neck.
After Niall Toner popped Derry into the lead, Jack McCarron could’ve has easily been awarded a free in after Chrissy McKaigue and McKinless closed in around him.
The Currin man was the most talked about Monaghan player in the build-up and the sight of a free out being awarded energised both Derry and their supporters in the rammed arena.
They were marginal calls, but Derry were now turbocharged by the direction the game was going. It was soon followed by McKinless chasing back some 25 metres to make Shane Carey kick wide under pressure.
Would Derry being the same desire as they had against Tyrone? With five minutes on the clock in a pressure cooker environment…it was a big fat yes.
Another two key moments followed that changed the game forever.
Firstly, when Conor McManus pulled an 11th minute shot wide, Odhran Lynch grabbed a ball from beside the post. Shea Downey was in a pocked of space on the wing. Lynch knew where he was. It was the same square metre of grass he found Conall Devlin in when the 2017 MacRory clash with Bessbrook hung in the balance.
The same ball McManus had landed in the D’Alton Road terrace, found its way back on the pitch and inside the white line. By the rule book, the kick-out shouldn’t have been allowed to stand. Thankfully for Lynch, Gough and his officials either didn’t notice or played their leniency card and his chipped pass found Shea Downey. Seconds later Ethan Doherty laid the ball off to Gareth McKinless.
The same open space Down exploited was staring at him with a ‘come and get me’ invitation which McKinless snapped up. The flatfooted Darren Hughes was a sitting duck in his defensive role and McKinless hammered to the net. Boom, 1-2 to 0-0 and it was advantage Derry. 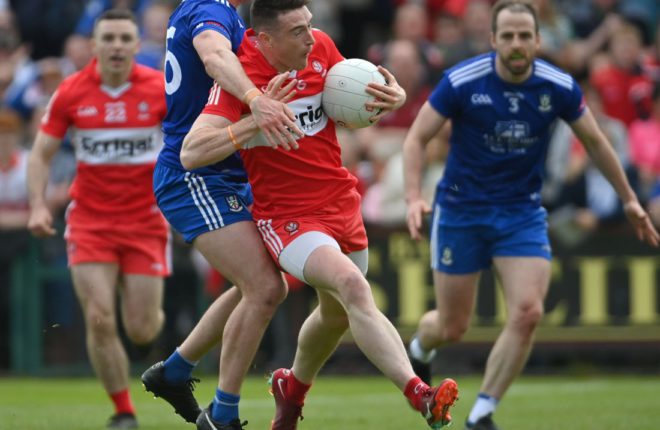 The second moment came when Conor Doherty spilled possession and Monaghan headed goalwards. Bannigan looked odds on to get a shot at Lynch, but Ethan Doherty’s sheer athleticism took him back into the danger zone where his composed tackle picked Bannigan’s pocket.
A Monaghan goal would’ve levelled the game. Once again it was advantage Derry.
Over the game, the numbers point to a Monaghan team closer to the party than first glance. Derry’s economy saw them take 15 of their 20 chances, whereas Monaghan raised 17 white flags from some 34 shots. Some were under pressure, but others were from scoring areas and would’ve gave them more oxygen.
Rory Beggan found a Monaghan jersey with 16 of his 20 kick-outs, whereas a busier Odhran Lynch had a 54 per cent strike rate.
But scratch the surface and 2-5 of Derry’s tally came from Lynch’s kick-outs. His picking out of Shea Downey led to the first goal, with his over the top kick to Conor Doherty leading to Benny Heron’s second goal – both with Ethan Doherty’s imprint on them.
Then you have the long ball, from play, to pick out Niall Toner behind an out of place Conor Boyle for the other goal. It was also his kick that let to Conor McCluskey’s goal chance.
Derry also benefitted from 1-6 as a direct return from turnovers.
Of the seven shots at the posts Monaghan generated from winning Derry kick-outs, they only scored twice. Beggan (free), Ryan McAnespie  (twice), Karl O’Connell and a block on Gary Mohan deflecting wide off McCarron were the five missed chances.
Of Monaghan’s 17 points, seven came from turnovers – five in the second half. Six came from Rory Beggan’s kicking as a source, with originating from Derry’s kick-out.
It builds a picture of how Rory Gallagher must address the variation Shaun Patton brought to the Cavan game, mixing up the short and long, securing possession on all but one occasion.
There is the conundrum of Donegal’s wall across the middle. Thompson. McGee. McFadden. Langan. Throw in Murphy and the chance of Caolan McGonagle making start.
Derry will need to maximise their key moments on Ulster final day against a team playing 10 of the last 12 deciders.
For Derry, they’ll need to take solace from how they were able to dig deep in the second half as Monaghan turned up the heat.
After losing two kick-outs long and conceding the first two points of the second half, Derry’s game management saw Lynch pick out Emmett Bradley who did a Forrest Gump on Conor Boyle before helping Derry believe again with an inspirational point.
With three points between the teams, Dessie Ward wound up to sneak a second point only for Conor Glass’ positional sense having him in the hot spot to block him and seconds later Ethan Doherty – who else – passed to Paul Cassidy to pop over the bar and Derry could breathe easier.
Sport is that game of fine margins.
Then you have the killer instinct of Benny Heron. He had plenty of work to do when Ethan Doherty picked him out in the 61st minute. Heron’s second involvement in the move led to him using a bounce dummy to buy a yard of grass. A fisted point would’ve opened a five-point lead, but Heron backed himself and drilled hard enough to avoid Ryan Wylie’s block and nestle in the top corner.
Fortune favours the brave and they needed every inch of their seven-point lead to fend off a Monaghan fight back and edge themselves into a first decider since 2011.