DERRY minors bounced back from their Ulster final defeat and are now one hour away from a third All-Ireland final at the grade in six seasons.

Martin Boyle’s side face Galway on Saturday and vice-captain Ruairi Forbes insists their 4-8 to 0-16 defeat at the hands of rivals Tyrone was a “big motivational factor” in their revival.

“We knew we weren’t ourselves and we had to come out in the quarter finals and show our true identity,” he said of their win over Cork.

Their three-point interval lead didn’t do justice to Derry’s first half performance against the Rebels, but Forbes’ point within 11 seconds of the restart jolted them on their way to victory.

Forbes, a MacRory Cup winner earlier this season, accepts there were positives from their disappointing day in Clones. Clocking up a tally of 16 points was no mean feat and they pulled a four-point deficit back to the narrowest of margins on three different occasions, including the dying minutes. 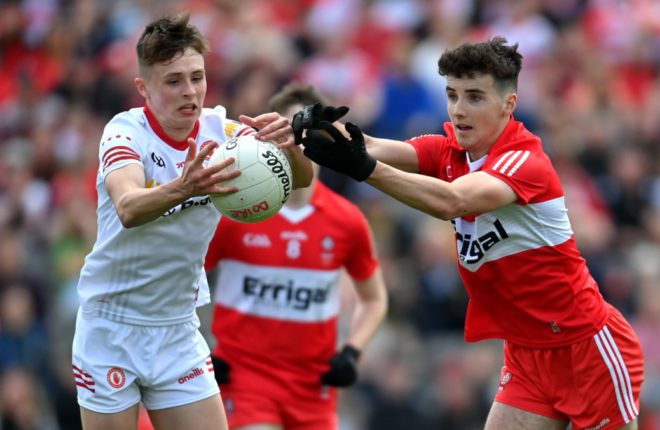 “We kept coming back and never said die. Every time it went to four, we pegged it back,” he said. “They got a goal at the end that was very unlucky, it showed we are a very courageous team and never give up.”

As another Saturday session comes to a close at Owenbeg, Forbes takes a second to reflect on what it’s like to play on this current Derry minor team.

“Bond…” was the prompt reply. “It’s just great to be playing on a team with such good friends,” he said, expanding by chatting of the want to be training together or hopping on a bus for any of their five Championship days so far.

“I remember back to Christmas time and the first few training sessions, there was a silence in the changing rooms and hardly nobody was hardly talking,” he explains of their new beginning.

“There were different groups, but now you go in and sit with whoever and the craic is good. Every week and day, we have been growing as a group and getting stronger.

“There is that bond in this group and we all play for each other,” he added when asked of the secret to bouncing back from their Tyrone defeat.

“That’s the most important thing about the collective and if you play as a team you are going to be very hard to stop. If we all stick together, hopefully we can get over the semi-final (against Galway) as well.”

They’ve had to do it without their injured captain Ryan McNicholl  who sustained a ruptured cruciate ligament early in their win over Donegal. At the time, Forbes didn’t realise how bad the injury was.

“It was a big loss for us, obviously he’s our captain,” he said. “An injury like that means that other boys have to step up and that’s what happened…Johnny (McGuckian), Fionn (McEldowney) and Danny (McDermott)…those boys all stepped up to the mark when we needed them most.”

Speaking seven days ahead of their Galway clash, Forbes hadn’t “fully” studied all their opponents’ traits, but has full faith in the management team to have the homework done.

“We’ll hopefully get our match ups right and then we’ll work on our attacking side, to be in our best shape going into that match,” he said.

“It would be a dream to play in an All-Ireland final and to play in Croke Park, as a minor that’s the greatest stage. We have put in the work and that’s what we’re aiming for now.”