DERRY manager Rory Gallagher has confirmed Niall Loughlin will be ready to take on Clare in next weekend’s All-Ireland quarter-final.

The Greenlough man was forced off in their win over Monaghan with a tightening of his back, an injury that lingered during the season.

Loughlin, who has 4-26 to his name this season, bagged 1-2 in the Ulster final win over Donegal before being replaced by Emmett Bradley in the 48th minute.

“He tightened up in the second half, so we took him off, but the four weeks will have been a help with his preparation,” Gallagher told Gaelic Life.

Sleacht Néill’s Padraig Cassidy is also in “full training” after being plagued with a groin injury. His only start – as well as six substitute appearances – this season was against Meath in the final League game, when he was replaced by Shea Downey after 30 minutes.

“It’s going to need treatment at some point, but he is rehabbing away,” Gallagher added. “We thought he’d be ready for the final, but he wasn’t and he is training away.” 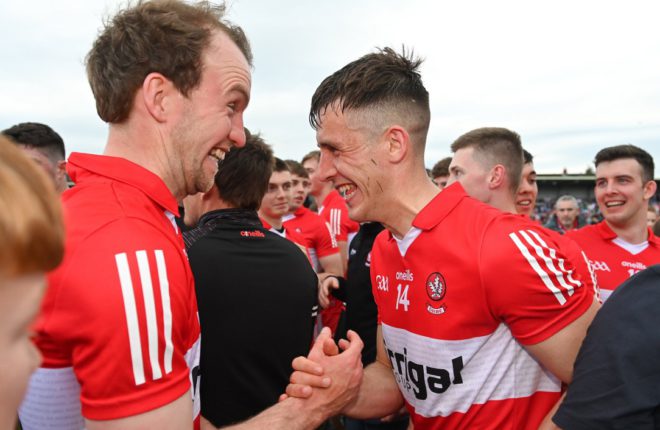 Enda and Matthew Downey – who missed chunks of the season – due to injury are also back on board.

“Enda is back training again, he has not done the same volume of training as the rest of the squad since he has been out for so long,” Gallagher said, referring to Downey kicking two points in the mid-January McKenna Cup defeat to Donegal before a hamstring injury forced him off.

After winning three Ulster Championship games in four weeks, 27 days will have passed from their win over Donegal by the time Chrissy McKaigue leads the Oakleafers out from under the Cusack Stand next Saturday.

The Derry boss confirmed Derry hadn’t played a challenge game – saying it wasn’t something that interested him – during their window of preparation.

“We were back training by the Thursday night,” he said. “We have knuckled down as you’d expect and we’ve been training at a very good level. I would’ve always been keen to see the boys training in the middle of Championship when they’ve won games.

“Naturally the level of training and their own work rate actually goes up without them realising it because they are just on such a high.

“There has been some very good quality training and something that over the next eight days now, we hope to keep going at a very high level. We’d taper it down coming in into the games, it’s been brilliant.

“Wherever the gaps are, we’ll adjust the way we train and prepare. We have enjoyed it and we feel are a better team today then we were going into the final.”

Check out next week’s Gaelic Life for Derry’s senior and minor build-up as well as a preview of Armagh’s date with Galway.