Being on the outside, looking in at winners, does that. In that moment, his seven winners’ medals were irrelevant.

The Harps had the chance to emulate Sunday’s opponents, Enniskillen Gaels, and their six-in-row.

In Cassidy’s first county final, 2004, they stopped the Gaels making it seven.

Cassidy remembers their modest expectations beforehand. The champions having a monopoly on possession. It was about hanging tough and Kevin McGrath’s goal made the difference.

Last year, it was Ederney’s turn to put the brakes on a dominant force, when Marty McGrath’s heavy lifting shattered Derrygonnelly’s dreams.

“It is not a nice place to be…standing on that field and I suppose you think of it all year,” Cassidy recalls.

It hit hard. Cassidy, now 38, laments the 2008 defeat and the other finals they should’ve reached.

“With the team we had, we should’ve won more. It drives you on and gives you that extra motivation,” said Cassidy, the iconic warrior and spiritual leader of the current crop that is littered with players with a litany of underage medals.

One of six brothers, it was always football at home. Just ask the gable wall about the evenings it got peppered with ball after ball.

It’s the first final he won’t tog out alongside older brother Kevin, who called time on his career at the end of last season at the ripe old age of 44, having played on the 1995 winning team.

“I always looked up to him when he was on that team,” Declan points out. “Six or seven years later, when you joined up with the seniors, it was great playing with him.

“We have been working hard at underage. The setup at underage has always been very good in Derrygonnelly.”

An under 14 championship medal was all that underage offered him. But it didn’t define the rock at the heart of their crusade at senior level.

Cassidy feels two titles wasn’t a reflection of what they had to offer.

After their 2009 title, they ‘went away’ for a few seasons during their rebuilding phase that has paid dividends.

“A lot of young lads came together and really gelled under Archie (Martin Greene) and we’ve been kicking on ever since,” said Cassidy of a group of players that won
everything from under 12 to minor level.

“They didn’t know what it was like to be beat in the championship. The young guys coming through, it pushes us older boys on. If you are getting it tight in a game, you know they are going to come on and do a job.”

This season is proof. Absorbing battles have defined Derrygonnelly’s every step, which has turned into a championship in itself almost. Four games, with replays needed to see off Ederney and Kinawley.

While it tests the body, Cassidy prefers games to training and learning curve has been invaluable.

Right from their first game. After leading Ederney at half-time, three quickfire goals left Derrygonnelly on the brink.

“When the third goal goes in, you are worried when you are four or five down,” he admits.

Their experience gained from the championship arena stood to them. They dug in their heels and forced a draw, with substitute Rían McGovern hitting the last score.

“It is a big difference now when you have a bench, with lads coming on and really changing the game,” Cassidy points out.

“There are fresh legs and young lads are mad to play football. They’re putting a shout out to start every game after performances they have been putting in.

“There are a few boys out of minor – Conor Burns and Aaron Jones – and they are starting. The quality of footballers in Derrygonnelly is very good. When they are pushing us on, it makes it a bit easier.”

After losing their grip on the New York Cup, it was a determined Harps squad that assembled to plot their new season with one focus – to get back to the top.

“A savage amount of work has gone in this year,” stresses Cassidy. “Every man is training hard. Shane Ward is in training us and he is a very knowledgeable football man.” 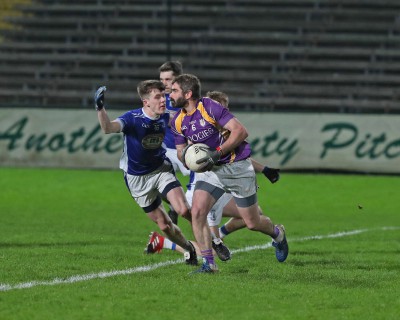