DONAGHAMOYNE’S Cathriona McConnell has revealed that she and her team mates remain determined to keep their winning record alive.

The 19-in-a-row Farney champions take on Bredagh as they aim to lift their 13th Ulster title and a second ever three-in-a-row.

Donaghmoyne were pushed to the pin of their collar to get out of Monaghan. After a one-point semi-final win over Emyvale, they needed extra time to see off Emmet Óg in the decider.

“It is always tough in Monaghan and that maybe brought us on,” Cathriona stresses, referring to being three points down with 10 minutes of the final remaining.

“We were saying ‘we can’t lose this’ and we pushed on and I don’t know where the energy came from. We put our heads down and said we can either work for these next ten minutes or our year is over.”

After an opening day home win over Glenfin (2-22 to 1-5) in Ulster it was a trip to Carrickmore for the Ulster semi-final where four first-half goals put them on their way to a 5-16 go 1-2 win and a place in Sunday’s decider.

“The Glenfin game was good for us. It showed that we were peaking at the right time, we were happy with that. You don’t want anybody coming in and beating you on your own patch,” McConnell said. “In our previous games in Monaghan, our shooting wasn’t great, so that game gave us a boost in confidence.”

After wins over the Donegal and Tyrone champions on what she said was the ‘tough side’ of the draw, Donaghmoyne will be well placed this weekend, but Cathriona points to their win over Bredagh in last year’s semi-final as a warning shot.

“We only won that by five or six points,” she said. “They are a good team, so we’ll not be taking anything for granted come Sunday.”

Every year, Cathriona is posed the same question. Year on year. Where does the hunger to keep going come from? A love for football? She always laughs at the question.

“When you think about it, who ever gets sick of winning?” comes her reply. “Who wants to lose? You train hard you put in the effort and you want to be winning.

“You can never win enough. It is hard to keep going, but there are younger girls coming into the panel.”

With younger players coming looking for a starting jersey, it sharpens the focus to keep at the top of their game.

“You want to keep winning as much as you can as long as you are there,” she said.

“The hunger is still there and that joy when you do win, it makes these hard winter nights training easier.”

Sunday could be another such successful landmark. 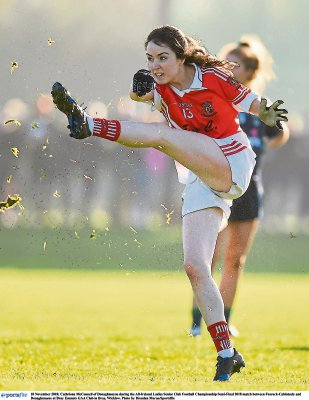