THE ruthless streak that Armagh had hoped Kieran Donaghy would bring to the Orchard set-up was more than obvious when the Kerry legend discussed the side’s attacking options ahead of Sunday’s Ulster clash with Antrim.

Asked for his opinion on a number of forwards, his answer was almost the same for all – they’re doing great, they could be doing a lot better.

Take, for example, when he was asked how he was enjoying working with Rian O’Neill who continues to star for Kieran McGeeney’s side.

“I have really enjoyed working with him,” Donaghy said. “I think he has a good bit to go on his journey, he is learning every day.

“He has a fantastic skillset. He wants to get better, which is an important trait in any player. I think he knows himself that there’s more in him and he’s working hard to improve all the time. His raw materials, his skill levels are at a very high level.

“I think the work that Julie Davis and the backroom team have done with him, he is in fantastic shape. He is a fantastic athlete along with his brother Oisin. They’re two great athletes and two guys who want to improve all the time.

“They’ve been a pleasure to work with so far but I think there is a good bit more in them.”

Or how about Andrew Murnin who made a surprise start in the relegation play-off win against Roscommon and produced a couple of moments of magic before being called ashore?

“He took a fantastic mark and scored. He won a few great balls. There was one in particular where he should have won it easier but he dropped it and fumbled it and stumbled after it and managed to win it with two or three fellas hanging off it. The crowd really reacted to it.

“I think what he is is a guy who likes to bring others into play which is a key trait that I like in a player.

“Yes he has been very unlucky and has been dogged with injuries over the last number of years but the lads are working with him to give him the best chance.

“Andy got his chance the last day and he played really well so it’s a big few weeks for him to hold onto the jersey.

“It’s a point I make all the time. A wise man once told me in Kerry that it’s much harder to get dropped from the Kerry team than to get on it. You’ve got to mind your jersey, you’ve got to hold it and cherish it.

“For a player like Andy who struggled with that level of injury over the last number of years, it shows how good he is that he can go on that limited bit of football, show enough in that few weeks in training that he was called upon for a huge game for his county, which was against Roscommon.

“Like I said about Rian and Oisin, I believe there is more in him and it’s up to himself and us, the management, to get more out of all of those boys. That’s what sport is about, getting better all the time.”

And one more for luck. Let’s see what Donaghy had to say about Jemar Hall, the worker bee of the team who runs himself to a standstill so others can shine.

“To give him credit, he’s not just going around working, he’s chipping in with scores. He’s really brought a huge sense of teamwork to that position in how much he goes back and helps defenders, how he is in the tackle and then obviously chipping over a few points.

“He was really strong against Roscommon. Talking to him after the game, I want him to get better, I want him to get advice on a few things. These boys are hungry to improve and that’s the enjoyment I’ve gotten from working with them.”

It’s very clear that Donaghy is not in Armagh to beef up his CV, he’s here to win and he feels that the Orchard have bags of potential if they can continue moving in the direction they have been in more recent seasons.

Antrim at the Athletic Grounds presents a wonderful opportunity to get their Ulster campaign off to a winning start, but it’s also a reminder that the successes of the McGeeney era have mostly been confined to league situations.

“Yeah, of course,” was Donaghy’s response when asked do they chat much about transferring that success to the championship.

“Absolutely it’s a big goal for us to deliver in the championship (against Antrim).

Donaghy added that the belief in the camp was sky-high and even suggested that the mentality was better than what he had experienced when playing for Kerry – and he put a lot of that down as a consequence of McGeeney’s ambition filtering down to his players.

“The mentality is probably better because of the culture that Kieran has developed over the last six years. They are a fantastic group with the time they put into it, how professional they are, the leadership group on the players’ side and the message they constantly drive.

“It has been a huge learning curve for me to see how much work Kieran has done over the last number of years, it is starting to hit home with the players and they are really driving it on.

“It is a player-led culture. Whereas in Kerry what has gone before will carry a certain amount of weight, these players are really trying to forge their own story and their own history.

“They’ve climbed through the divisions and managed to stay up in a very tight group this year.” 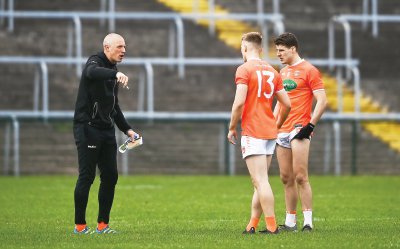 16 May 2021; Armagh selector Kieran Donaghy speaks to Niall Grimley, right, and Rian O’Neill during the Allianz Football League Division 1 North Round 1 match between Monaghan and Armagh at Brewster Park in Enniskillen, Fermanagh. Photo by David FitzgeraldSportsfile

14 November 2020; Sarah Marley of Armagh during the TG4 All-Ireland Senior Ladies Football Championship Round 3 match between Armagh and Mayo at Parnell Park in Dublin. Photo by Sam BarnesSportsfile