THE Donegal senior footballers will go in search of a tenth Ulster Final appearance in 11 years when they take on Tyrone in Brewster Park on Sunday at 1.45pm.

The provincial semi-finals have been a happy hunting ground for Donegal since 2011, and the only side to beat them at this juncture during that time was Tyrone four years ago.

There aren’t many secrets left between the neighbouring counties, and Bonner is anticipating a tough championship encounter.

His side was fortunate to scrape over the line against Derry last week, and while the Na Rossa man says they need to raise their game on Sunday, he would gladly accept another one-point triumph.

“It’s a huge game for us. Tyrone are one of the top teams in the country.

“We have had some massive games against them over the last few years.

“We seem to run into each other every year and they are always close games.

“They have a lot of quality players that we are going to have to keep a close eye on, and we need to improve from last week.

“We were pleased to come through that match but we know we are going to have to lift it this week.

“From what I gather there will be about two and-a-half thousand supporters allowed in and that should make for a good atmosphere.

“I think the weather is to be very warm at the weekend and it’s knock-out championship so it won’t be for the faint-hearted in Brewster Park.”

Tyrone dethroned Ulster champions Cavan by 1-18 to 0-13 last week in Healy Park. That result did come at a cost as Ronan McNamee was sent off and the O’Neill county were expected to appeal that decision this week.

Donegal will only have seven days to get ready for the match, and that means there won’t be a lot of time to work on things on the training ground.

Bonner said: “It’s all about recovery this week and trying to get the bodies right.

“We had a really challenging Ulster Championship match last week and we had to push hard to win it. Tyrone have had an extra day to get ready as well.

“You don’t have much time. We have been trying to do some analysis on their win over Cavan last week and they were impressive.

“But the majority of our focus is just on ourselves and making sure we get the performance we need to get through the match.” 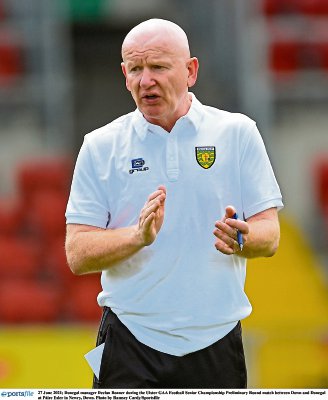 CHALLENGING… Donegal had a difficult game against Derry last weekend