ARMAGH’S victory against Derry in the quarter-final is a huge boost to the confidence to the team. The Oak Leaf minors had won the delayed 2020 All-Ireland title a few weeks before and there were some key players returning for the 2021 campaign.

The Orchard had an impressive spread of scorers in that game. Eight players in all registered points. They were Cianan Campbell, Rogan McVeigh, Tadgh Grimley, Aaron O’Neill, Luke McKeever, Bernard Cassidy, Ethan McKenna and Callum O’Neill.

They had to battle back from a poor first half in which Derry dominated. Armagh hit seven of the last eight points to secure their win.

The concern for Armagh might be that they allowed Derry lots of chances. Had the Oak Leaf boys taken them then there would be a different pairing in this semi-final.

Armagh’s opponents are Donegal, who beat Monaghan by 1-9 to 0-10 in the quarters. Donegal had already had a run out in the competition as they had hammered Antrim, and that experience gave them a slight advantage.

They did have to play without the services of Ethan Friel who was sent off after 25 minutes.

Luke McGlynn’s converted penalty was an important score for Donegal. Monaghan were real battlers and will feel like they should have got something from the game but it was Donegal’s depth of scorers, and the impact of Michael Callaghan and Gary Kelly from the bench, that made the difference.

In total they had eight scorers against Monaghan and that would suggest that this game will be a shoot-out.

BASED on the performances in the semi-final, it would appear that Tyrone look the more likely team to progress to the final.

The Red Hands were easy winners over Down in the quarter-finals, winning by 3-16 to 0-9. Fermanagh in contrast only had a point to spare over Cavan.

Yet the Erne county have every reason to be confident. They were behind by 0-6 to 0-1 midway through the first half, however by half time they trailed by just a single point. The reliability of free taker Caoilte Farry was important during that period as they closed the gap on the Breffni.

Cian O’Brien’s goal lifted Fermanagh in the second half. That put them three ahead. Cavan had a man sent off and their late goal meant that the scoreline was closer than it might have been.

Yet that performance probably won’t be good enough to beat a Tyrone team which is laden with talent.

Gavin Potter, Ruairi McHugh, Shea O’Hare and free-taker Cormac Devlin are all very dangerous players and should have enough class to cut through the Fermanagh defence.

DOWN look to carry their great form in the Ulster Championship into the All-Ireland series.

After good wins over Cavan in the quarter-final and then Fermanagh in the semi-final, they faced their toughest challenge in the decider. But they were equal to the test.

Down beat Monaghan by 3-15 to 1-14 in the Ulster Championship final last week. Ruairi O’Hare’s goal was a crucial moment in the game.

He palmed to the net after eight minutes to nullify Monaghan’s good start.

Odhran Murdock and Tom Close were very good at centre field and their physical presence played a huge part in Down’s success. As has become the fashion these days, Down play a roving goalkeeper, and their net-minder Charlie Smyth moved out of goal so that they could push the Monaghan boys back.

Down had a fine spread of scorers. Anthony Morgan, Tom Smyth, Patrick McCarthy and Shealan Johnston, and their points were important in the first half.

The Down management of Conor Laverty, Martin Clarke and Sean Boylan might be concerned as to how their team conceded a goal against the run of play in the first half. He may also be frustrated with how the team were unable to punish mistakes made by Monaghan in the second half.

Laverty brought Andrew Gilmore on for the second half, he had a big impact as he got in for a goal to put Down in front.

He would score again, along wth Shea Croskery, and Charlie Smyth’s pointed free would put Down three ahead.

Monaghan were chasing the game and Justin Clarke stole in to score Down’s third goal on the break in extra-time.

Down’s opponents in this weekend’s All-Ireland Championship are Roscommon.

The Connacht champions are a team with a solid defence. They limited Mayo to just 1-7 in their provincial final meeting.

The players to watch out for include Adam McDermott, who scored Roscommon’s goal after he robbed the ball from the Mayo defender Conor Dunleavy before finding the net.

James Fitzpatrick is another dangerous scoring threat, and his second goal killed off the Connacht final. He scored a total of 1-3 in the decider. Daire Boyle is the free-taker and three of his five scores were from placed ball.

Down have a fine chance of winning this game, but they will have a real test in trying to break down Roscommon’s sturdy defence. 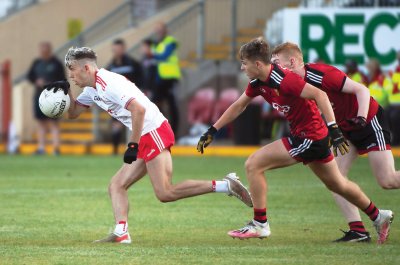