Bredagh player Clare Timoney says that she and her team mates have set their sights on April 12 and a return to action.

But it is not the heat of competition that they are looking forward to, or the chance to get their skills back up to scratch. The return promises something more important.

“Now we have been doing Zoom calls sometimes three times a week for ten weeks. We are starting to get sick of them. We have got the date now of April 12 and everyone is ready to get back onto the pitch.

“It’s as much a social thing than anything else. So we are ready to go back.”

Timoney said that the management have been proactive in making sure that their players have used the period of isolation wisely.

They have had speakers on zoom calls, who have come on to give them advice. They have had heard from Sharon Madigan, Aoife Fitzgerald one of the Cork managers. Last year they had Carla Roe from Dublin.

“We learned about what sort of things they do when the practice, even small things like nutrition and recovery. They are things that we know already, but it helps to go over it.”

Timoney said that she has been pleased that the team have tried to take a sensible approach to lock down.

“We aren’t putting a lot of pressure on ourselves. We have a lot of experience on the team, so we do know these things.”

Despite the lockdown the club still have the same ambitions.

“I think any club has ambition to be successful. We want to win Ulster titles and compete for All-Irelands if and when those competitions come back. The team that we have, I feel the talent is there to win an Ulster club and to go on. There is ambition that we will get to that stage. That is where we are building towards.”

Timoney says that she is in the final stages of her playing career but she has hopes that she can achieve success with Bredagh.

“We have got to Ulster finals but we have been stopped by the hurdle that is Donaghmoyne. I think we have a fantastic team, we have to learn a bit of cuteness. We need to build a bit of resilience. We can be the fittest team but we need to do a bit more character building as that is what is going to get us over the hurdles of Donaghmoyne.”

They feel that they are getting closer to getting to the next level.

They have good news in that they have Eilish Ward back in. She is from Donegal, and had moved back as she was going to move to Canada. that hasn’t happened so she is back in Belfast. Eva Hicks is back in as well. They are two senior players and will have a big bearing on Bredagh’s success. Anna McKee is in university in Liverpool and she will be back later in the year.

“We are in a good position and we hope that we can get back into the swing of things in April.” 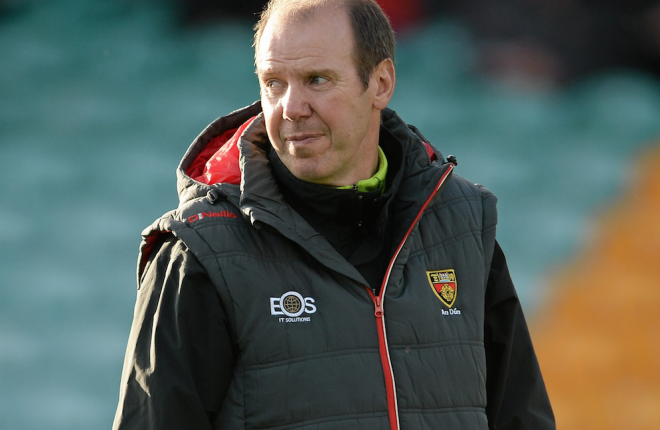 Davidson training with Down

ALAN Davidson scored two goals during an in-house game for Down last night.